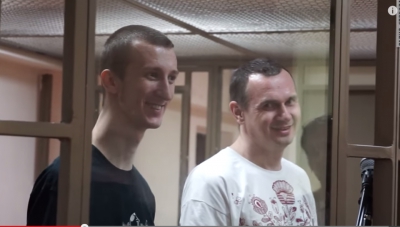 All evidence has now been presented Russia’s trial of renowned Crimean film director Oleg Sentsov and civic activist Oleksandr Kolchenko. There is nothing against the defendants, plenty that incriminates the FSB and its methods, yet an acquittal is not expected

Kolchenko’s lawyer Svetlana Sidorkina told Radio Svoboda that she has no illusions regarding an acquittal, which she calls the exception to the rule in Russia.  She expects that the court will convict the two men, without any modification in the charges, although all the evidence gathered indicate that the men are innocent. of the terrorism charges.  Dmitry Dinze, who is representing Sentsov, agrees with respect to the evidence and clearly shares the same expectations from the Russian court.   He does however hope that he can get the charge of belonging to Right Sector removed and points out that not one witness even gave any confirmation that Right Sector had even been in Crimea in Spring 2014.  It is not immediately clear why this is so important. The organization that Russia has persistently demonized is now banned in Russia, but was legal at the time of the supposed ‘terrorist plot’. There is no evidence that Sentsov ever had any contact with the organization, and Kolchenko’s  anti-fascist left-wing views make the very suggestion of his involvement in a far-right organization absurd.

All ‘evidence’ against Sentsov and any involving ‘terrorism’ against Kolchenko are based on the testimony of other people, chiefly the other two opponents of Russia’s annexation who were also arrested in May 2014.  Oleksy Chirniy refused to testify in court, but stood by his earlier testimony given as part of a deal which got him a minimum 7-year sentence.  On July 31, Gennady Afanasyev, who is serving the same 7 year sentence after ‘cooperating’ with the investigators, refused to testify and stated that he was retracting his earlier testimony which he had given under duress.  He later told his lawyer about the torture he had been subjected to for his first ‘confession’, and then the pressure and threats he received both before and after appearance in court.

His account corresponds to that given from the outset by Oleg Sentsov, and described here.

Russia’s Investigative Committee refused to initiate criminal proceedings over Sentsov’s torture.  It cited a statement from the FSB that Sentsov had caused himself injuries using “items of a sadomasochistic nature”.

Needless to say, there is no evidence of Sentsov having any such inclinations.

Details of why Oleg Sentsov and Oleksandr Kolchenko must be considered political prisoners can be found here.

The next hearing is on Aug 19.

PLEASE WRITE TO THEM in Rostov on the Don!

If Russian is not possible, write in English, but be aware that the letters will be vetted so simple is best, and nothing too political!