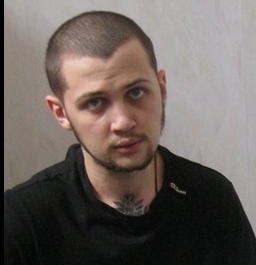 The renowned Memorial Human Rights Centre has recognized Gennady Afanasyev as a political prisoner and warned that he is in danger following his retraction of testimony against Ukrainian film director Oleg Sentsov and activist Oleksandr Kolchenko.   The statement coincided with the resumption of the trial of Sentsov and Kolchenko and demand by the prosecution for a 23-year sentence for Sentsov, and 12 years for Kolchenko.  It follows a desperate plea from Gennady Afanasyev’s mother regarding her son’s safety and on behalf of all three men.

Memorial lists the charges against Afanasyev, namely involvement in two night-time firebomb attacks on the offices of pro-Russian organizations; participation in a terrorist organization supposedly led by Oleg Sentsov; plans to blow up a monument to Lenin and an attempt to buy explosives.

Afanasyev admits only the firebomb attacks.  Memorial says that it has examined the taped conversation between Chirniy and Pirogov, an FSB informer, and agrees that this indicates that neither Afanasyev or Sentsov was involved in any plan to blow up the Lenin monument.   There is nothing to indicate the existence of a permanent terrorist organization behind all three episodes.

Memorial repeats the same objections to the classification of the firebomb incidents as terrorist that it made with respect to Kolchenko (who admits to having taken part, as the lookout, in one incident).  The attacks were at night, with no deliberate attempt to cause casualties.  Nobody demonstrated any plan to frighten the population which is a mandatory element for considering something to be an act of terrorism, nor were any demands presented.

Classification of such acts as terrorism also runs counter to Russian practice.  There have been a number of arson attacks on United Russia offices in various parts of Russia beyond Russian-occupied Crimea over recent years.  They have been prosecuted as deliberate destruction of property or hooliganism, with even the maximum sentences under those articles 3 or 4 times less than for terrorism.

The other concerns which Memorial mentions apply equally to all three men and have been reported here.

A person must not be tried for his civic stand

Gennady Afanasyev’s mother has made a desperate plea for help in saving her son, as well as Ukrainian film director Oleg Sentsov and civic activist Oleksandr Kolchenko.  All of them, she writes, are political hostages who are being punished by Russia for their civic stand.  All three men, as well as Oleksy Chirniy, are Crimean Ukrainians who opposed Russia’s invasion and annexation of their homeland.

“Any other citizen could end up in their place. Each of us should have a clear civic position, and a person must not be tried for that.  You can’t condemn a person for a poem expressing love of their Homeland.  They were born and grew up in Ukraine, they studied Ukrainian history, and were brought up following certain traditions. You can’t try a person for their wish to help others, regardless of their nationality, or for taking part in a medical course aimed at providing first aid to people in need. You can’t try a person for preparing porridge and taking it to soldiers going hungry in military units.  I also cooked that porridge.  What does it matter, whether a Ukrainian or a Russian!”

“You can’t condemn a person for decisions he took under torture. I pray that there will be no more of it and beg officers of the FSB and the prison colony where Gennady will be taken to not beat my Son.  You too have children!”

She writes movingly of her son, and mentions also that he knows how to be a friend.  She thanks his friends for having been supportive since his arrest, and ends her letter by asking Ukrainian President Petro Poroshenko, Russian President Vladimir Putin and the world community to help save Gennady Afanasyev; Oleg Sentsov and Oleksandr Kolchenko.

There were signs from the outset that Russia wanted a show trial of opponents.  It miscalculated badly on a number of scores.  Firstly, Oleg Sentsov and Oleksandr Kolchenko continued to not only deny all the charges, but they constantly repeated that they had been tortured while still in Simferopol.  There was every reason to assume that the same applied to Gennady Afanasyev and Oleksy Chirniy, but the investigators imposed total secrecy over the proceedings, so details were scant.  Afanasyev and Chirniy were ‘tried’ separately with both receiving 7-year sentences – the minimum under terrorism charges – for ‘confessing and cooperating with the investigators’.

It was clear from the first day of the trial of Sentsov and Kolchenko that the prosecution has absolutely nothing against the men, especially Sentsov who is charged with masterminding ‘the plot’.  As mentioned, Memorial first issued a statement in which it condemned the trial and recognized Sentsov and Kolchenko political prisoners.

Despite the lack of any evidence at all, and no justification for charges of terrorism against any of the four men, the prosecution is demanding an incredible 23 year sentence for Sentsov and 12-year sentence for Kolchenko.

One FSB officer has already ‘visited’ him since and hit him very hard, and he is known to be facing immense pressure to now claim that his retraction was given under pressure.  The threats received have included menacing words about bad things happening to his mother.

One important way we can all help is to make this case as public as possible.  It took immense courage for Afanasyev to retract his testimony and both Sentsov and Kolchenko have resisted all attempts to pressure them into ‘cooperating’ for a shorter sentence.

Please try to alert the media to this case and also ask your government to express its concern for Afanasyev’s safety, and to reiterate the calls made by the European Parliament, Parliamentary Assembly of the Council of Europe and most democratic countries for Sentsov and Kolchenko’s release.