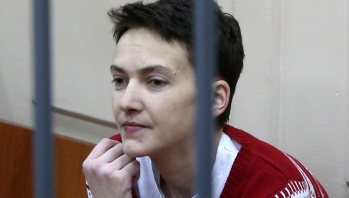 On Aug 21 the Rostov Regional Court refused to move the trial of Ukrainian MP and former military pilot Nadiya Savchenko to Moscow.  The trial is to continue in Russian Donetsk, a small city without proper court facilities and 150 kilometres away from the remand prison in Novocherkassk.  This means that Savchenko will spend a minimum of three hours per day being taken to and from the court.

The closed preliminary court hearing on July 30 agreed to ask the Rostov Regional Court to consider which court should hear the case. At the hearing on Aug 21, the judge claimed that the fact that witnesses in the case live in Moscow, Moscow oblast and in Voronezh (and nobody in Russian Donetsk) was not sufficient reason for moving the trial.

The judge asked Savchenko if she understood.  The latter replied: “Glory to Ukraine, Glory to the Heroes!”.   Her lawyers call the ruling predictable and say that they do not plan to appeal it.  p>Since the grounds for moving the trial to Moscow or even Voronezh are compelling, it seems safe to assume that the pretence with the prosecution agreeing to the review and the Rostov Regional Court ‘deliberating’ was simply a delaying tactic.

What the reasons for such delay were can only be guessed.  Certainly Russia’s conviction on manifestly absurd charges of Estonian police officer Eston Kohver and the Russian prosecutor’s demand for 23- and 12-year sentences for Ukrainian political prisoners Oleg Sentsov and Oleksandr Kolchenko make it quite clear that the Kremlin is not interested in even imitating respect for rule of law.  The contempt shown for Russia’s Constitution and international commitments has long been evident in the ongoing detention and now trial of Savchenko.  She was abducted to Russia in June 2014 after being captured by Kremlin-backed militants in the Luhansk oblast.  The charges against her are quite surreal and she in any case has an irrefutable alibi.  Savchenko’s lawyer Mark Feygin was blunt about the case in an article for the Guardian on Aug 20, entitled “Russia is using jailed Ukrainian pilot as a pawn in its game with the west”

Feygin described the court building on July 30 as “guarded like Fort Knox”.  There are very serious concerns about the location, including of a security nature.   As reported, Savchenko made a formal appeal back on July 17 to Russia’s Prosecutor General to have the trial moved to Moscow where all investigative activities had been carried out.

More details about the charges here: Savchenko material shows how Russia concocted ‘case’ and what it can’t conceal