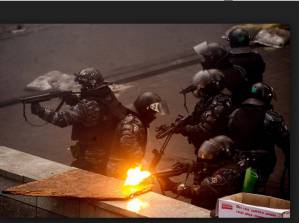 Oleksandr Shcheholev, the former head of the Kyiv SBU [Security Service] has been remanded in custody for two months on charges relating to the killing of Euromaidan activists.  Shcheholev had been under 24-hour house arrest since March 6 this year, and the arrest on Aug 20 and detention order are reported to be linked with new charges.

Pavlo Dykan, one of the lawyers representing Maidan victims, notes that Shcheholev was directly in charge of the SBU’s so-called anti-terrorist operation from Feb 18-20.  Dykan believes that Shcheholev was responsible for numerous killings and injuries; the arson attack on the Trade Union building and other crimes.

Taras Hatalyak, a human rights lawyer also working with victims, expressed satisfaction at the detention seeing it as proof that the Prosecutor General’s Special Investigations Department is working.  It is tough-going, he says, but he believes that they will get there and ensure that the culprits are punished.

It has certainly proven worryingly difficult to get real progress in investigating the numerous crimes connected with Euromaidan, and not only the killings on those last terrible days.

Three former Berkut officers – the head of the unit Dmytro Sadovnyk and two subordinates Pavlo Abroskin and Serhiy Zinchenko - were arrested back in April 2014 on suspicion of involvement in the murder of 39 protesters on Instytutska St on Feb 20, 2014.  Abroskin and Zinchenko remain in custody, and their trial began in July this year.  Sadovnyk, however, is in hiding.  An initial court ruling placing him under house arrest was appealed and on April 22 he was also remanded in custody, only to be released, officially under house arrest, on Sept 19.  That decision was taken by Svitlana Volvoka from the Pechersky District Court with immediate effect.  By the time the Prosecutor General’s Office [PGO] appeal was due to be heard, Sadovnyk had absconded.

The PGO apparently initiated criminal proceedings against Judge Volkova accusing her of deliberately issuing a wrongful ruling.  There is no information as to how the investigation into those proceedings is going.

On Feb 24, 2015, two former Berkut officers – Oleksandr Marynchenko and Serhiy Tamtura – were remanded in custody, on the same charges over the death of 39 Maidan activists on Feb 20.

In June 2015 Oleh Yanishevsky, a police lieutenant colonel and Sadovnyk’s immediate subordinate was arrested and remanded in custody over the killing of 39 protesters on Feb 20, 2014.  Yanishevsky was working in the police force until his arrest and as deputy commander of the Kyiv Berkut special force unit in Feb 2014, was considered the highest-ranking officer to be charged.   The pre-trial investigation is still underway, however there was suggestion that Yanishevsky might also be charged with issuing orders to kill.

At the press conference on the report, Pavlo Dykan identified a number of key failings in the investigation into Maidan crimes, namely: the lack of sufficient technical backup; procrastination with qualifying the alleged actions of people arrested back in April 2014; Interior Ministry sabotage; court trials being dragged out and others.  He said then that there had effectively been no progress in the investigation into the beating by police officers during the events on Bankova St on Dec 1, 2014 and during the storming of Maidan in the early hours of Dec 11, and many others.

For a long time there was a diffuse range of investigations into different cases carried out by various investigative bodies.  As a result, no investigator or prosecutor had any idea of the overall picture and could not establish the connections between different events, with some clear offences simply being ignored.  Another problem was that the investigators concentrated solely on those who carried out the abuses, and did not try to establish who gave the orders.

The authors of both ‘Year of Impunity’ and of the International Advisory Panel’s damning report were scathing about “uncooperative attitude” from the Interior Ministry and the SBU.

It was thanks to serious pressure from the public and lawyers of the victims that 10 months into all official investigations, a special investigation department was created within the Prosecutor General’s Office.  This is now the single centre investigating all crimes committed during the Euromaidan protests, and, as we can see, is finally making progress.