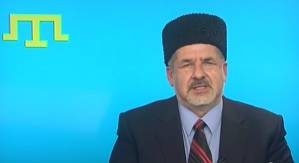 Refat Chubarov, Head of the Crimean Tatar Mejlis, or representative assembly, has addressed an appeal to German Chancellor Angela Merkel; French President Francois Hollande and Ukraine’s President Petro Poroshenko who are meeting in Berlin on Aug 24.

Refat Chubarov writes that the leaders’ meeting will take place 542 days after the beginning of Russia’s special military operation against Ukraine that resulted in the occupation of Crimea and the bloody military conflict in the Luhansk and Donetsk oblasts.

Russia has effectively been waging war with Ukraine for 542 days with thousands of soldiers and civilians killed; tens of thousands injured, and over one and a half million people forced from their homes.

In Russian-occupied Crimea, the Head of the Mejlis writes, the Crimean Tatars, the indigenous population of Crimea, are facing a direct threat to their very existence.  The Crimean Tatars held mass demonstrations and protests in Feb-March 2014 against Russia’s invasion and they continue to support the UN General Assembly’s March 27, 2014 Resolution on Ukraine’s territorial integrity.

Chubarov points out that this Resolution, as well as numerous other calls by the UN, the EU, the Council of Europe and the OSCE, have been ignored by Russia which continues its unlawful occupation.

The tragic position of the Crimean Tatar is worsening from day to day.  Crimean Tatar leaders Mustafa Dzhemiliev and Refat Chubarov, civic activist Sinaver Kadyrov and Ismet Yuksel have all been banned from Crimea and the Deputy Head of the Mejlis, Akhtem Chiygoz remains in detention, together with Crimean Tatars Ali Asanov and Mustafa Degermendzhy.    Dozens of young Crimean Tatars have been abducted or disappeared, with some later found murdered. There is still no trace of others.  Hundreds of activists of the Crimean Tatar national movement have been subjected to repression by the occupation regime’s punitive organs.

Refat Chubarov addresses the three leaders, saying that history has placed on them, and the leaders of other sovereign states a huge responsibility not only for the fate of their own people and countries, but – without any exaggeration or pathos – for the future of all humanity.

Human civilization which in the twentieth century endured the mortal threats posed by the fascist and communist regimes must not be held hostage to the irresponsible actions of Russia’s rulers who have violated all norms of international law and ignored the right of people to freedom and peace.

No country or people should be sacrificed to please an aggressor.  The Ukrainian and Crimean Tatar people who endured Holodomor and the Deportation have the right to receive full support and assistance from the international community.

Refat Chubarov ends by asking the leaders to take effective measures during their meeting aimed at restoring Ukraine’s territorial integrity within internationally recognized borders and ensuring Ukraine’s sovereignty over its entire territory, including Crimea.