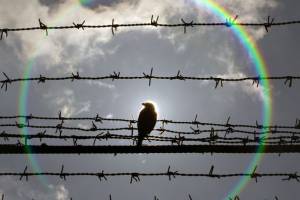 50 years ago, on Sept 4, 1965, Ukrainian poet Vasyl Stus, Viacheslav Chornovil and other young Ukrainian intellectuals stood up, quite literally, to demonstrate their opposition to tyranny and to the arrests of other Ukrainian intellectuals.  They paid for their courage in resisting the Soviet regime, first through being thrown out of their work or studies, later through periods of imprisonment

Russia and the occupation regime in Crimea are currently holding a number of Ukrainians prisoner on entirely fabricated charges.  Some of them have already been declared political prisoners by the renown Memorial Human Rights Centre, for example, Nadiya Savchenko; Oleg Sentsov; Oleksandr Kolchenko and Gennady Afanasyev.   Others are simply held in detention, with all those in Russia having been in custody for over a year.  There is enormous secrecy over some of the cases, but every reason to believe that in each, the charges are entirely fabricated.

One of the prisoners – Gennady Afanasyev – committed an act of courage in retracting testimony against Sentsov and Kolchenko and stating openly in court that it had been extracted through torture.

He has since been threatened and once beaten, and there are strong reasons for concern that he could face reprisals.

Every letter helps make it clear that the authorities are being watched.

The same applies to remand prisoners who have systematically been refused access to the lawyers of their choice, the Ukrainian consul.

Former Soviet political prisoners like Myroslav Marynovych have stressed how important it was to them to receive letters from people all over the world, demonstrating that they were not forgotten.

PLEASE WRITE TO THE PEOPLE BELOW.

Some of the addresses are provisional at the moment.  Up-to-date information will be posted here as it becomes available.

If you have no idea what to write, then the following will certainly get through the censor, and will fulfil the above aims.

Otherwise, please write in Russian or in reasonably simple English.  Remember that any letter will be checked by prison staff.  An innocent letter talking about your family, interests or country will probably get through; a letter expressing political views will not and could even get the person into trouble.

Details of their cases (for your information, not the letters!) in the following (and the links below the texts) :

Gennady Afanasyev declared a political prisoner, together with Sentsov and Kolchenko

More detail about the torture he was subjected to here

Details of his case here:

See the following (and the links below the text)

The trial of Klykh and Karpyuk, and ongoing detention of  Litvinov and Soloshenko, are receiving dangerously  little attention.

In all cases you can help the men by informing politicians, journalists and others about them.

If possible write more than once and number your letters.  It would be excellent if you could send them registered.

NB  The above list is not, unfortunately, comprehensive and will be regularly updated.