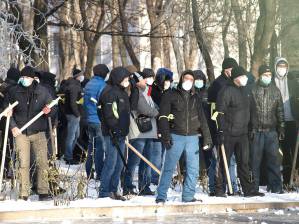 A second person accused of grave crimes against Euromaidan activists has gone missing after a controversial decision to free him pending trial.  Tavakkul Ragimov was released from custody in July this year despite objections from the prosecutor and victims’ lawyers.

Ragimov is a current police officer who had not even been suspended from his job in the police force.  He is accused of having led a group of ‘titushki’, or paid thugs from the Kharkiv ‘Oplot’ Club  believed to have been behind a number of abductions; assaults; torture; robbery; and threats to kill in Kyiv during Euromaidan.

Pavlo Dykan, one of the lawyers representing Maidan victims, reports that Ragimov was due to appear in the Obolon District Court in Kyiv on Monday, Sept 7.  Although there has as yet been no official confirmation that Ragimov is missing, one of his lawyers announced in court that he had no contact with his client, while the other failed to appear at all.  Dykan suggests that she may have known that Ragimov had disappeared.  Dykan points out that the Obolon judge, Yulia Bevzenko also rejected all calls to remand Ragimov in custody, and suggests that there is systematic obstruction of the course of justice in this case, with judges playing a major role.  The possibility that Ragimov might go into hiding was reported here back in late July when Ragimov first missed a court hearing and it is frustrating that the same scenario appears to be unfolding as with the release from custody and subsequent disappearance in September last year of Dmytro Sadovynyk.

According to Dykan, the Ragimov case is one of the few which has been effectively solved, with the believed perpetrators arrested.  The investigators are, for example, convinced that the attack on a young Kyiv resident on the evening of Jan 21, 2014 near the Petrivka Metro Station was the work of the Oplot titushki who had been brought to Kyiv that month.  The young man, who in fact had no connection with Maidan, was knocked to the ground and beaten up before being dragged into a bus and taken away. He was interrogated about alleged involvement in Euromaidan, about Maidan leaders, etc.  He was threatened and beaten in the bus, then at a titushki camp on the outskirts of the city.  The investigators maintain that the person in charge in the bus was Ragimov, a police officer.  The beating and torture at the camp is believed to have been with the involvement of Yevhen Zhilin, head of Oplot.  The latter only released the young man after several hours, having finally ascertained that he wasn’t connected with Maidan.

Ragimov was arrested in Spring 2015 and initially remanded in custody.  He is facing charges of group hooliganism using objects intended to cause injury; robbery linked with life-threatening violence; abduction by prior group conspiracy with the inflicting of physical suffering, as well as threats to commit murder.  The maximum sentence for these charges is 7 years imprisonment.

Yet in July Judge Kateryna Sereda from the Pechersky District Court in Kyiv released him from custody, seemingly under partial house arrest (he had to be at home at night).

Dykan asserts that during the pre-trial investigation period, Ragimov remained a serving police officer and had access to databases and operational information.

On Sept. 19, 2014, Judge Svitlana Volkova from the same Pechersky District Court released under house arrest Dmytro Sadovnyk who was the commander of a Berkut special force unit which is suspected of shooting dead 39 protesters.  Volkova found the fact that Sadovynk had a wife, three children and a flat in Kyiv, as well as a good character reference, compelling enough grounds to release him from custody despite the serious charges.  He immediately disappeared.

The Prosecutor General’s Office announced that a criminal investigation had been initiated over Volkova’s ruling.  Nothing has been heard since.

Maidan victims’ lawyers have been positive in their assessment of the special investigation department was created within the Prosecutor General’s Office.   Both they and the Council of Europe’s International Advisory Panel have been highly critical of the Interior Ministry for its uncooperative position.

It is unclear why, given the nature of the charges against him,  Ragimov was not even suspended from the police force during the investigation.  That and the circumstances around his release and disappearance cannot help but raise questions about the authorities’ commitment to holding those responsible for crimes against European activists to answer.