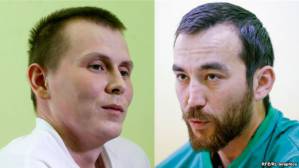 Aleksandr Aleksandrov hasn’t seen his parents in person in months -- he was captured in May in eastern Ukraine, where he says he was on active duty with the Russian military on a mission to help separatist rebels fighting against Kyiv’s forces.

But now, Aleksandrov has exchanged emotional videotaped messages with his anxious mother and father, courtesy of a Russian journalist who knocked on their door in the remote Russian village of Rozhki, in the Kirov region about 1, 000 kilometers east of Moscow.

Pavel Kanygin, a special correspondent with the independent Russian newspaper Novaya Gazeta, has posted videos of two visits to the home of Aleksandrov, whose capture added to mounting evidence of a direct Russian role in the conflict in eastern Ukraine.

Kanygin first travelled to Rozhki in late August to tell the Aleksandrovs, Anatoly and Zinaida, about their son. The parents, recognizing the journalist who had interviewed their son in Ukraine, were immediately suspicious.

Kanygin was eventually invited inside, but the first hour of conversation was held in raised voices. Kanygin writes that Anatoly discreetly turned on a voice recorder, trying not to attract the journalist’s attention.

But Aleksandrov’s parents seemed to warm up slightly to Kanygin, even sharing a meal of dumplings and garden vegetables with the journalist. "I would love to talk to him, " Zinaida, Aleksandrov’s mother, said of her son.

Kanygin offered to record a video message for Aleksandrov.

After arriving in Kyiv and getting permission from the Ukrainian Security Service (SBU), the journalist showed the recorded greeting to Aleksandrov -- whom he calls Sasha, short for Aleksandr. "He doesn’t take his eyes off the screen, " Kanygin writes. "He is blinking, barely restraining himself, then he laughs when his father talks about potatoes."

The journalist then recorded a video message from Aleksandrov to his parents and his wife, Katya. "Well, tell everyone that I miss them, " he says. "That I am very happy that everything is fine, that you are not sick, that everything is fine at home. I miss Katya. I love her very much. I believe she’ll wait for me, " Aleksandrov says in the video.

Two days later, when Kanygin returned to the sergeant’s home, his parents still met him with "doubts and accusations." But their attitude softened again when they saw their son on video.

"We will love and wait for him no matter what, and we won’t change our opinion" Anatoly tells Kanygin. "Whatever he decides, he is our son."

"If you publish this story, it will probably help all of us, " Zinaida adds.

Aleksandrov and another Russian, Yevgeny Yerofeyev, were captured and detained on May 16 in Luhansk Oblast and accused of terrorism. The SBU claims the two men have admitted to being part of a sabotage and reconnaissance group helping pro-Russian separatists in eastern Ukraine.

Despite ample evidence, Russian President Vladimir Putin has repeatedly denied that Moscow has sent soldiers into eastern Ukraine, where the conflict has killed more than 6, 500 people since April 2014, and said that any Russians fighting there have gone of their own accord. Russia’s Defense Ministry has said Aleksandrov and Yerofeyev left the military before their capture.

Aleksandrov has adamantly denied that, saying he never resigned from the Russian military and was carrying out orders when he was captured.

Both men are currently awaiting trial in Kyiv.

Moscow, which has long claimed there are no Russian servicemen in Ukraine, says the two men had retired from the military intelligence service before going to Luhansk to join the separatists.

Some officials have spoken of the possibility of exchanging Aleksandrov and Yerofeyev for Nadia Savchenko, a Ukrainian pilot jailed in Russia after being captured in eastern Ukraine last year.

"If we must take the path of negotiating an exchange, we will look at this possibility, definitely, " Ukrainian Foreign Minister Pavlo Klimkin told Ukraine’s Channel 5 in a September 7 interview.