Fined for reading poetry at civic memorial to Boris Nemtsov 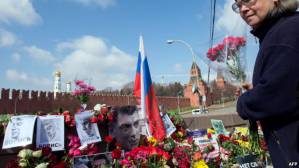 Andrei Margulev was fined 10 thousand roubles by a Moscow court on Sept 11, after being arrested by police while sitting at the place where Boris Nemtsov was gunned down on Feb 27 this year.  The ruling came four days after the same court fined two religious activists 1 (one) thousand roubles for destroying an art exhibition which they claimed offend Russian Orthodox believers.

Moscow’s Tverskoi District Court in Moscow found Margulev guilty of infringing established procedure for organizing or holding a public gathering (Article 20.2 § 1 of the Code of Administrative Offences).  The police explained that Margulev had been detained while sitting on a chair with a Russian flag and reading poetry, with five people next to him.  Margulev pointed out that the flag was attached to the chair and that he himself had been keeping vigil at the memorial alone.  The police nonetheless claimed – and the Tverskoi Court judge accepted - that he was holding “a simultaneous mass presence obstructing pedestrians”.

The video here shows how difficult it would be for Margulev, even if he really was part of a “a simultaneous mass presence” to obstruct pedestrians.  Lybov Sergeeva, a grandmother, explains that she simply couldn’t remain at home after Nemtsov’s murder and that she often stands guard here over the civic memorial on ‘Nemtsov Bridge’ (formally Bolshoi Moskvoretsky Most) during the night. The photos, flowers and candles are regularly trampled or taken away either by pro-Kremlin activists from such ‘patriotic organizations’ as NOD [the National Liberation Movement’] or by the authorities.

On Aug 18, activists from an organization calling itself ‘God’s Will’ burst into an exhibition at the Manezh Centre near the Kremlin and trampled several works by the underground artist Vadim Sidur.  The activists - Pavel Timonin and Ludmila Yesipenko, as well as the organizer of the attack, Dmitry Tsorionov  claimed that the works offended the sensibilities of Orthodox Christians.   The estimated damage ran to 1.1 million roubles, with the works of the deceased artist either damaged or totally destroyed.

A judge at the same Tverskoy Court found the actions to have been ‘hooliganism’ – and fined Timonin and Yesipenko  (Tsorionov’s hearing is on Sept 15.) one thousand roubles – ten times less than the fine imposed on Andrei Margulev for protecting the civic memorial to Boris Nemtsov.