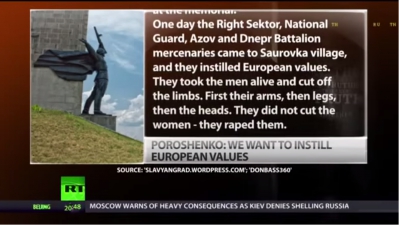 The Kremlin-funded TV channel Russia Today showed, then quickly removed a film claiming that ’the junta’ in Kyiv and its ’Nazi mercenaries’ are carrying out genocide, ethnic cleansing and starving its population, while children are being taught Nazi slogans and salutes.”.  The presenter of the so-called ‘documentary’ speaks of “civilians being systematically massacred”.  The programme in its sick entirety can still be watched here

Three months after unknown assassins gunned down Russian opposition leader Boris Nemtsov outside the Kremlin, his daughter called for sanctions against those running Russia’s propaganda machine. Zhanna Nemtsova compared the dangerous rhetoric of state-controlled Russian media to the hateful radio broadcasts that precipitated Rwanda’s 1994 genocide. Her appeal was widely reported, as had been her father’s murder. Several months later, Russian investigators look set to claim that President Vladimir Putin’s fiercest critic was killed as revenge for his comments about the massacre of Charlie Hebdo cartoonists in Paris—not because of his opposition activities in Russia—and his daughter’s calls for sanctions have been largely ignored.

Putin has kept a tight lid on Russian press freedom ever since taking office in 2011, but the aggressive propaganda—particularly against Ukraine, which emerged early in 2014—is new. Colta.ru recently interviewed former employees of mainstream Russian channels on the condition of anonymity. One journalist said they had been told by his boss in February 2014 that the 1970s and 1980s was child’s play to the cold war now beginning and that those unwilling to take part should quit. Most stayed.

Kremlin bosses apparently handed top management instructions on the usage of terms like ’junta’ and ’fascist’ when covering Ukraine; these terms were then passed down to employees. The TV channels were also told to stop competing with each other, which resulted in humorous gaffes such as when Rossiya 1presented a patient in hospital as the pro-federalism victim of "Right Sector radicals, " while NTV claimed that the same person was a German-based mercenary who’d brought foreigners to Ukraine to carry out violent acts. The stations based their claims—repeated by Foreign Minister Sergei Lavrov that Ukraine was using prohibited phosphorous bombs—on 2004 footage from Iraq.

Well-deserved ridicule of such fakes did, however, blur the real danger behind the lies. Russians, as well as Ukrainians living in areas controlled by Russian-backed rebels, were receiving a daily barrage of lies according to which Ukrainians were supposedly committing genocide against their Russian-speaking population and that those Russians—like Nemtsov, who opposed Russia’s undeclared war—were enemies of the people. A major global propaganda effort to label the tragic May 2, 2014, fire in Odesa as a "massacre" by pro-Ukrainian radicals is known to have prompted young men to go to fight in the Donbas. Such lies had been used before to provoke pogroms against Jews in Eastern Europe and, twenty years ago, by the ruling tribe in Rwanda, to justify genocide.

Some argue that Russian propaganda is too outrageous to be believed, and therefore counterproductive. Certainly citizens of countries where Kremlin-funded Russia Today (RT) competes with other channels—and where the Internet is not blocked—can access other information and draw their own conclusions. Whether they critically assess such information is questionable. Moscow has increasingly, and with considerable success, targeted an anti-NATO and anti-US audience. Jeremy Corbyn, newly elected leader of Britain’s Labor Party, has frequently given interviews to RT and in 2014 was more than happy to repeat Putin’s propaganda about "fascists" in Ukraine. He has been totally silent about serious human rights violations in a way disturbingly reminiscent of the myopia demonstrated by left-wing intellectuals during Joseph Stalin’s repressions.

For a long time, international media watchdogs widely criticized efforts by Ukraine as well as by Latvia and Lithuania to block Russia’s propaganda media. Their argument was basically that any point of view had the right to be heard, and that other media should simply present counterclaims. Such criticism gradually waned as it became clear that the pro-Kremlin media’s distortion and manipulative editing of the news had little in common with journalism.

This is why Ukraine’s recent sanctions list was such a frustrating debacle. Instead of sanctioning only those clearly engaged in warmongering and distortion, Ukraine drew up a list that included journalists from, for example, the BBC. The result was predictable, with Ukraine accused of infringing on freedom of speech. Conceding partially to demands, Ukraine has so far has removed six foreign journalists from the list.

In March 2015, the European Union announced plans to monitor and respond to pro-Kremlin media bias; it eventually created an eight-member task force, East Stratcom, for that purpose. A recent analysis by James Panichi suggests that those plans have encountered the same resistance as have anti-Russia sanctions. One member told Panichi that the experts are under pressure to "avoid antagonizing EU governments that are looking to tone down tensions with Russia."

Even without opposition, the EU team is manifestly not enough, a feeling echoed by Poland and the Baltic states, which have often been the target of Russian propaganda and understand the danger it poses.

It is possible that democratic tools and the standard requirements for balanced journalism are simply incapable of dealing with virulent state-generated propaganda. Few people, for example, seriously believed Russia’s attempts to shift blame after the Malaysia Airlines jet was shot down on July 17, 2014. This is not the case with the fire in Odesa that killed dozens of people in May 2014, nor even with regard to Russia’s involvement in the Donbas. Despite evidence from foreign media, US sources, NATO, and even Amnesty International, Western media reports invariably state only that Ukraine asserts Russian forces are there. Russia says they’re not, and readers and viewers can take their pick.

The Kremlin has now chosen a particular course, and this is what the media follows. No one knows what will be decided tomorrow. Piecemeal alternatives to torrents of lies may make us feel we’re achieving something, but severe sanctions against those who incite hatred and violence would save more lives.

Photo of Zhanna Nemtsova from RFEL; the image above is a screenshot from the RT video cited