Russia says Poland, not USSR, was Hitler’s Ally and Responsible for Holocaust 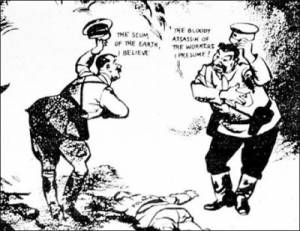 In an eerie readjustment of historical facts, Russia’s Ambassador to Venezuela has claimed * that   the Soviet Union did not invade Poland on Sept 17, 1939 and that it was in fact Poland, not the USSR, that collaborated with Nazi Germany.  His explanation of how half of what was then Polish sovereign territory came to be under Soviet occupation is disturbingly similar to the arguments presented by Russian President Vladimir Putin as justification for Russia’s annexation of Crimea.

Ambassador Vladimir Zayemsky’s comments are in a page-long interview which appeared in "Correo del Orinoco” on Sun, Sept 20 under the title “The Truth as Historical Imperative”.   He asserts that there has been an increase in attempts to attribute “supposed” crimes during the Second World War to the Soviet Union, and calls Poland the worst liar.

By engaging in what he calls a campaign of lies, Zayemsky asserts that Poland hopes to divert attention from its own inappropriate behaviour during the Second World War.

The campaign of lies would seem to be an international conspiracy, since most historians agree both in essence and terminology that the Soviet Union invaded Poland, without a declaration of war, on Sept 17, 1939.  They agree, as does the documentary proof, that this was on the basis of the Secret Protocol to the Molotov-Ribbentrop Pact of Aug 23, 1939.   Poland, which had been invaded by Nazi Germany on Sept 1, fought valiantly but was finally defeated on Oct 6, with its territory carved up, as per the Secret Protocol between the two invading countries.

The Russian ambassador’s wrath was aroused by an address given by his Polish counterpart Piotr Kaczuba during the presentation of a documentary film entitled ‘Last Correspondent’ which uses the dirty word – invasion.

Russia’s authorized representative claims that “the alleged invasion by Soviet forces of Poland in 1939 is a lie”.  He goes on to claim that although Poland was the first victim of WWII, it tried to be “Hitler’s faithful ally” in the period before the War.  He describes the admittedly shameful Munich Agreement as follows: [Poland] “was the only European country which accompanied the Nazis after the macabre Munich agreement when Germany invaded Czechoslovakia.  Poles hurriedly grabbed Cieszyn as their military trophy”.  He goes on to claim that Poland’s government, to appease Nazi Germany, refused to agree to Soviet forces „who wanted to save that country from German aggression” entering Czechoslovakia.  He alleges that “it was Warsaw’s pro-fascist stand which made a treaty of cooperation between the USSR, Czechoslovakia and France impossible”.

Crimea is ours, and so was Poland

Zayemsky claims that the Soviet Union did not invade Poland on Sept 17, but merely took back territory which Poland had illegally stolen.

Whatever arguments can be presented as to whether the parts of Western Ukraine and Belarus seized by the Soviet Union should have been under Poland, they undeniably were recognized as Polish territory at the time.

Zayemsky’s argument is identical in its lawlessness to that put forward by Putin in justifying Russia’s invasion and forced annexation of Crimea.

Responsibility for the Holocaust

Russia’s representative also accuses Poles of responsibility for the Holocaust.  He claims that anti-Semitism in Poland was rife during the War “which led to the death of many Polish Jews killed both by their co-citizens, and by the Nazis. … The Holocaust was carried out, besides the Nazi horror, by Poles themselves.”

Poles make up around a quarter of all the Righteous of the Nations, recognized by Yad Vashem for their role as non-Jews in saving Jews during the Holocaust.  They include Irena Sendler who saved around two thousand five hundred Jewish children from the Warsaw Ghetto and Jan Karski who tried so desperately to warn a world that didn’t want to hear about the Holocaust.  Each person in Poland and Ukraine under Nazi occupation who was caught helping Jews risked summary execution of him or herself, and probably their families.  No country is free of collaborators and Jews were indeed also killed by Poles at Jedwabne, for example, however Russia’s representative in Venezuela is guilty of a profoundly insulting distortion of history.

There is nothing to indicate that Russia’s ambassador to Venezuela has been in any way reprimanded for such comments.  There are, in fact, no grounds for believing that he is not presenting the official Russian position.  In May this year, Putin justified the Molotov-Ribbentrop Pact, and there are ever-increasing moves to whitewash bloody Soviet dictator Joseph Stalin.   Under Vladimir Putin, Russia has illegally annexed Ukrainian territory, claiming this to be rectifying a historical wrong.  It now appears to be trying the same argument to justify Stalin’s criminal pact with Hitler and the resulting carving up of Poland. 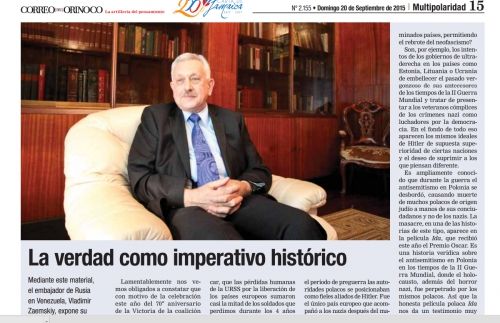 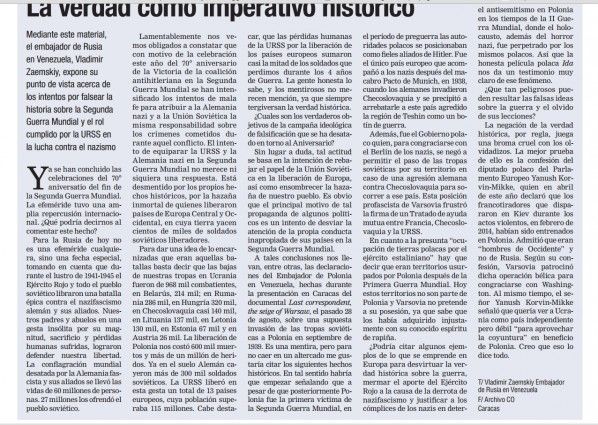