Not so new police: protesters and journalists detained in Kharkiv oblast 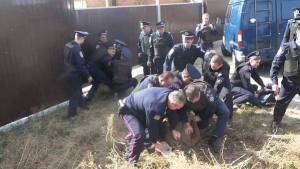 Two journalists and a number of protesters were detained on Friday Oct 2 near the Bohodukhiv Oil Depot in the Kharkiv oblast.  Unlike the detention of journalists outside the SBU [Security Service] building in Kyiv which elicited a formal apology, the police version of events simply ignores the presence of journalists.  Since the account given by the journalists is backed by video footage, it is to be hoped that the Interior Ministry investigates the incident.

Two journalists from the Kharkiv office of the civic journalist initiative Hromadske TV report that they were invited to cover a protest against allegedly illegal oil processing at the Bohodukhiv Oil Depot.  The protesters believe that the oil is being brought from areas under Kremlin-backed militant control.  The relatively small number of activists present were demanding a stop to the processing and a meeting with the Director.

The journalists - Serhiy Moskalenko and Viktor Pichuhin - say that within 3 minutes, 8-10 cars with police number plates turned up with uniformed officers getting out of them.  On the video, a person not wearing a balaclava, appears to be talking quite peaceably to the police.  He asks the person in plain clothes and apparently wielding authority why the police are allowing such ‘lawlessness’.  The officers can be seen trying to search the protesters’ van.  Seemingly because the latter objected, they were forced to the ground.  The journalists say that the men were detained and forced into a police van, with one of them hit on the head.  Despite the fact that Moskalenko was wearing a press jacket, and both men clearly state that they are journalists, Moskalenko and Pichuhin were also taken away in the police van.

Pichuhin says that he was given no explanation as to why they’d been detained.  The police tried to question them, but he refused to answer any questions without access to a lawyer and explanation as to why they had been detained.  They were told that they had resisted the police, yet he points out that there is a video which shows that that was not the case.  They were then told that they’d been detained to establish their identity, but this was also more than unconvincing since both men were press badges.  They were finally released after writing explanations.  Pichuhin says that they were held for about 45 minutes in the police van, and then another hour and a half in the police station.

The journalists plan to make a formal complaint and point out that they have video footage demonstrating that the officers obstructed them from carrying out their legitimate work.

The police version of the events seen on the video is quite different.

According to the press service statement, “a group of young people in balaclavas obstructed the vehicle entrance to the enterprise, threatening its employees with reprisals and then resisting the police. The police detained the young men, removing a baseball bat, knives and a gas canister.  A criminal investigation has been initiated over unlawful use of weapons.

The report states that the director of the oil depot asserted that a group of around 10 people had offered “cooperation” for remuneration, threatening that if this was refused, they would block the oil deport, prevent its work, destroy its property and raw material.

“After receiving a refusal, the unidentified men, claiming to be fighting unlawful business, and with the use of a car without number plates, blocked the entrance to the oil depot, threatened the employees and administration with physical violence, expressing the intention to illegally enter and seize the depot”.

This highly ambitious plan by the alleged group of 10 (less are visible on the video) prompted the director to call the police who sent out a very large contingent.

The report states that “while establishing the circumstances and the unidentified individuals’ purpose, the latter refused to identify themselves and give any explanation for their activities, behaved in a provocative manner, did not react to the repeated demands and comments of the police officers and continued their unlawful actions”.

The police claim to have found quite some arsenal from personal searches, and a search of the vehicle.  The list provided is as follows: a wooden baseball bat; a machete knife; balaclavas; folding knives; other knives [ножи-пики], state number plates from another vehicle and a gas canister ‘Teren’.

The police report states that the “offenders” are Kharkiv residents aged from 18 to 25 and that an investigation has been added to the Register of Criminal Investigations under Article 263 § 2 of the Criminal Code (unlawful use of weapons, ammunition or explosive devices).

There is no mention of the two journalists.

The stories are widely divergent and the video therefore of particular relevance  http://hromadske.tv/society/560edd47edc11/