‘Criminal Sabotage’ to the Information War in Donbas 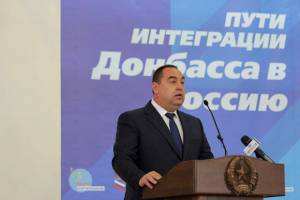 Igor Plotnytsky, head of the so-called ’Luhansk people’s republic’  - on "integration of Donbas with Russia", 18.09.2015

Civic activists have criticised Ukraine’s Ministry of Information Policy over the failure to restore Ukrainian television and radio broadcasting in areas of Donbas freed from Kremlin-backed militant control.  They point out that in front-line areas of the Luhansk oblast, there is either no Ukrainian broadcasting or virtually none.  You can, however, easily tune in to Russian and pro-Russian militant channels.   Meanwhile western governments are pushing Ukraine to enable elections in the so-called ‘Luhansk and Donetsk people’s republics’ purportedly in accordance with Ukrainian law, but without access to Ukrainian media or opposition views.

Civic activists Kostyantin Reutsky from the civic initiative Vostok SOS and Larisa Artyuhina from the NGO Novy Donbas recently returned from their latest trip around the area bordering the so-called ‘Luhansk people’s republic’ [‘LNR’].  All Ukrainian broadcasting was cut off back in 2014, but the areas are now under Ukrainian control and there is no excuse for this information dearth.

Both activists express frustration at how little has been done to restore Ukrainian media and block Russian propaganda sites.

Reutsky believes a great deal could be done to rectify the situation, but says that in over a year since they began travelled to these areas, there has been little serious progress.  He adds that the capacity and facilities which could broadcast Ukrainian channels are there, but are not being utilized.   He is also not aware of any efforts by the Ukrainian authorities to stop Russian channels.

Reutsky says that there are strong grounds for suspecting deliberate sabotage from those representatives of the local authorities who previously served the local oligarchs closely connected with the regime of Viktor Yanukovych.  They have held onto their posts despite being implicated, for example, in organization of the so-called ‘referendum’ on the region’s status in May 2014.

Larisa Artyuhina says that, aside from two ‘LNR’ channels, you can only hear Russian TV or radio.  She herself heard the ‘Victory Channel’ calling on people to join the ‘LNR’ army.

The head of the local administration told her that he and the former Luhansk Governor Hennady Moskal, repeatedly approached the Ministry for Information Policy asking for Ukrainian channels to be reinstated, and Russian blocked.  None of this appears to have been done, although Artyukhina is convinced that the Ministry, Ukraine’s Armed Forces and European partners have the capability to block Russian propaganda not just in the areas bordering territory under Kremlin-backed militant control, but also several kilometres into that territory.

Artyuhina pulls no punches – she sees the absence of Ukrainian broadcasting as “criminal sabotage” and suggests asking Yury Stets, Minister of Information Policy or Viacheslav Kirilenko when they last travelled to the area.  That, she says, will explain the lack of any progress.

There are also no printed publications in this area with a big enough print run to hope to have impact on public opinion.  Again, the Ministry of Information Policy is supposed to be preparing something.

Telekritika has frequently covered the fraught issue of restoring broadcasting and points out that one of the problems is that officials’ statements often contradict those made by civic activists.  In August, for example, the Ministry reported having reinstated broadcasting.

There does appear to have been more movement in the Donetsk oblast, with analogue broadcasting having been reinstated in Volnovakha, and a new television tower built outside Sloviansk which was liberated from the militants in July last year.

On July 1, 2014, militants under the command of Russian former or current military intelligence officer Igor Girkin destroyed the television tower near Sloviansk.  Earlier the television tower in Donetsk was seized with this now used to transmit pro-Russian and separatist channels to virtually the entire oblast.

The preponderance of Russian channels received in the Luhansk oblast dates back many years.  The situation there and elsewhere in eastern Ukraine became critical after Russia’s invasion of Crimea and heavy military support and manning of supposed ‘separatists’ in Donbas.  Russian journalists have reported being told back in February 2014 that a new cold war was beginning that made the previous one look like child’s play.  All pro-Kremlin media began providing constant ‘coverage’ of events in Ukraine, with the militants presented as heroes and freedom-fighters, and the Ukrainian army directly accused of ‘genocide’ (more details here).

The pro-Russian militants in Donbas immediately seized control of television and radio facilities as soon as they took over an area, often receiving highly specialized assistance, almost certainly from Russian technical experts.  All independent media was driven out of Donbas, sometimes after journalists were held hostage and often tortured.  One journalist, Maria Varfolomeyeva remains a hostage of the Luhansk militants to this day after being captured in January 2015.   The militants have forced local Internet providers to block at least 39 main Ukrainian or international websites, including the main media writing openly about Russian military involvement in the war in Donbas, opposition, etc.

All of this casts serious doubt over the latest agreement reached by the leaders of Ukraine, Russia, France and Germany for a special law enabling elections in militant-controlled areas with the OSCE to be there as observers.  Observers at polling stations are hardly capable of assessing the impact on voters of a near-total information vacuum and permanent diet of lies and distortion about supposedly ‘punitive Ukrainian forces’ serving a ‘fascist junta’.   Russian propaganda channels have largely ‘dropped’ Ukraine, and there is far less about events in Donbas, or in Ukraine as a whole.  What there is, however, remains highly slanted, and scarcely encourages informed choice.

President Petro Poroshenko has said that such elections cannot take place without the full freedom of Ukrainian media.  The position is to be welcome, however any attempts to ensure that people living in areas under militant control can tune into Ukrainian channels and hear alternative views to that presented by the militants and Kremlin will surely confront predictable resistance.  The fact that even in areas no longer under militant control, Ukraine’s government has still failed to provide a counter to Russian and pro-Russian propaganda was less foreseeable, and deeply frustrating.