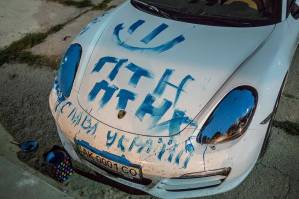 Reportedly the work of Right Sector fighters after the Russian owners of this Porsche tried to get through the blockade after being stopped (the Blockade is of trucks, not cars)

Update:  There were further reports on Wednesday of lawlessness by Right Sector activists on the roads leading into Crimea.  Andriy Krutsenko complained of having had two windows of his minivan smashed after he ignored demands to dump vegetables that he and his fellow passengers were clearly taking to Crimea for himself.   He recounted seeing an elderly lady forced to get rid of around 5 kilograms of vegetables, with the activists claiming that only 2 kilograms could be carried across.  The reports led to further denials from Right Sector, but also to a statement from Ilya Kiva, Deputy Head of the Kherson Regional Police.  He told Hromadske Radio that a decision had been taken that all cars at the roadblock will now be checked together with a police officer.   How likely this is to stop the problem can be questioned, but it is a welcome acknowledgement that something must be done. 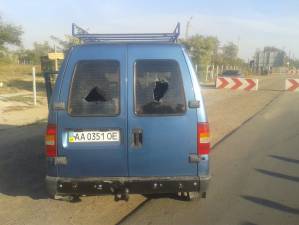 Initial concern over the involvement of the ultranationalist Right Sector in the Crimean Tatar-initiated Blockade of Russian-occupied Crimea has been compounded by a report from the Crimean Human Rights Group finding multiple infringements.

After receiving many complaints about the behaviour of “the paramilitary formations” taking part in the Blockade, well-known human rights activists Olha Skrypnyk and Vissarion Aseyev set out to investigate.  After spending Oct 6 monitoring the Chonhar crossing between the Kherson oblast and Crimea, they report that “Right Sector fighters are flagrantly violating human rights on the border with Crimea”.

They found, for example, that people armed with weapons, including firearms, who identified themselves as members of Right Sector had organized their own roadblock not far from the border crossing.  The rights activists say that as well as Right Sector, they saw people with the insignia of the Azov, Donbas and other volunteer battalions.

Armed men who were not from the police were stopping and searching ordinary cars, demanding that their drivers open the border and show their documents. The activists point out that the Right Sector fighters tried to stop them recording such infringements.

The activists were told that the Right Sector had been holding two men for a couple of days, but were not allowed to talk to them.  Right Sector alleges that the men are “separatists, and that they found drugs on them”. They claimed that the police and SBU [Security Service] had been informed and that they were waiting for the SBU to collect the men.  The police denied any knowledge of this.

A video posted on YouTube on Oct 5 shows Azov fighters interrogating a man who has very clearly been beaten and looks frightened.  The Azov members had found and demonstrate to the camera a Russian passport and a Kerch address.  The man admits to being an ensign in the Ukrainian emergency service, and repeatedly insists that he did not betray his oath, with this presumably having served as the excuse for the obvious blow(s) to the head.

“The Crimean Human Rights Group considers these actions to be a flagrant violation of freedom of movement and the right to liberty and personal security. They stress that it is unacceptable for volunteer battalions to assume the functions of the law enforcement agencies”.

As reported, Crimean Tatar leaders first announced plans for a ‘civic blockade’ of Crimea on Sept 8, which was to last until Russia released its Ukrainian political prisoners, removed all restrictions on Crimean Tatar and Ukrainian media and put an end to other rights abuses.   They called on other Ukrainians to join the blockade aimed at preventing Ukrainian goods from getting through to Crimea.  There could be no business as usual with an occupation regime so infringing the rights of Crimean Tatars and other Ukrainians in Crimea.

It transpired on Sept 20, the first day of the Blockade, that a contingent of Right Sector activists, members of other civic organizations, as well as fighters from various volunteer battalions had joined the Blockade.  The aims of the Blockade soon broadened, with activists vowing to continue until Crimea was freed from Russian occupation.

It was stated from the outset that only trucks would be stopped, not individual cars.  The situation with weapons was supposed to be just as unequivocal.  Ilya Kiva, Deputy Head of the Kherson Regional Police, was present on Sept 20 and stated that more than 100 police officers had been deployed.  He was adamant that only the Kherson Battalion had the right to bear weapons. It was not necessarily clear whether this was at Kiva’s initiative or an Interior Ministry decision.

Neither the promises regarding private vehicles nor the restrictions on weapons appear to have been kept, at least not by Right Sector and Azov members.  Or, if one is to believe a recent statement from Right Sector, by people pretending to be their members.  The statement was issued on Oct 2 following allegations that Right Sector was involved in extortion in the areas where the blockade is underway.  The statement asserts that Right Sector members are not involved and that there is severe punishment for any such incidents.  It claims that there are special groups within the organization with “the authority to react hard to incidents that discredit Right Sector and do damage to our fellow citizens”.

That any such incidents discredit Right Sector is undeniable. It is less clear how imposters near the border crossing could continue to engage in extortion if Right Sector members really had nothing to do with it.   There has also been no denial from Azov of involvement in the above-mentioned video clip which its members presumably do not understand does them no credit.

The denials have also, unfortunately, been heard too many times before, and often clash with reports from Ukrainian and international NGOs monitoring rights violations in Donbas, as well as of criminal activities in Mukacheve.  The authorities have taken efforts to react where members of volunteer battalions are believed to be engaged either in criminal activities, or have detained and ill-treated alleged separatists. The reaction is not, unfortunately, always warranted, as for example, with the detention of Yury Hukov, journalist and Kharkiv Human Rights Group employee.  Inept prosecutions only increase the likelihood that a part of the population will assume that any allegations are unjust, and that the government is wrongly targeting those really protecting Ukraine.  Right Sector has cultivated this view and with success,  judging by the latest opinion polls, If elections were held now, Right Sector would have a good chance of crossing the 5% threshold and entering parliament as a party. This is in stark contrast to its pitiful performance in the 2014 elections, and to the fate of the far-right Svoboda Party which has continued its downward trend.

The allegations from highly reputable Crimean rights activists cannot be simply dismissed as provocation or Russian propaganda.  It is frustrating that, through its controversial law on a so-called “free economic zone” in Crimea, Ukraine’s leaders have hindered, rather than helped those most directly affected by Russian occupation.  Crimean Tatar leaders felt compelled to begin this blockade because the government was not doing enough, and it is galling that those purportedly supporting them, are acting in a way that can only sabotage the initiative.