Savchenko returned if Ukraine ‘recognizes’ a predetermined sentenceNadiya Savchenko: “You can call me the artillery spotter”Savchenko demands that everybody give testimony using a lie detectorSavchenko trial - 3 judges & only the prosecution’s story allowedSavchenko to be tried in obscure ’military zone’ city 150 km from prisonSavchenko Trial: ‘Fort Knox’ Security and 300 kilometres on the roadNew attempt to keep Nadiya Savchenko trial secretSavchenko material shows how Russia concocted ‘case’ and what it can’t concealWords unspoken on first anniversary of Nadiya Savchenko’s captivitySavchenko’s detention illegally extendedOne Birthday Wish on May 11: #FreeSavchenkoInvestigators claim they questioned 108 thousand people over Savchenko caseSavchenko to be hospitalized after tests “raise serious concerns for her health”Yet another charge concocted against Nadiya SavchenkoNadiya Savchenko facing pressure to ‘confess’Savchenko: New charge dismissed as ‘technical mistake’Savchenko renews hunger strike, warns lawless regime must be stoppedIs A Savchenko Deal In The Offing?Nadiya Savchenko: “I’m learning to change tactics”Putin’s Verdict: Nadiya Savchenko to remain imprisoned
• Topics / News from the CIS countries 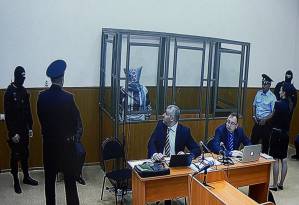 It is difficult to know how closely to follow a trial condemned by the international community in which the ‘defendant’s unbreakable alibi and absurdity of the charges against her are of no interest to the court.  Words like ‘trial’, ‘witness’ and ‘testimony’ lose any meaning when nobody is in any doubt that the sentence in this case will be passed in the Kremlin.

The hearing on Oct 6 marked a first with the video appearance of a witness whose account is alleged by the defence to be a lie from beginning to end but who was permitted by the court to conceal information that would have immediately confirmed that his story was false.

Up till Wednesday not one of the witnesses had appeared in this obscure courtroom in Russian Donetsk, 150 kilometres from the nearest remand prison, conveniently far from Moscow and small enough to enable journalists to be forced to follow the proceedings by video. The Investigative Committee claims that Savchenko entered Russia ‘illegally’ through the Rostov oblast, although she was initially remanded in custody in the Voronezh oblast.  Savchenko and the defence insist that she was taken by force to Voronezh, crossing the border with a bag over her head, after being captured by Kremlin-backed militants in the Luhansk oblast in Ukraine.

One of the witnesses on Tuesday – Alexie Miroshnikov – was supposed to have picked her up near Russian Donetsk, however typically he was also questioned by video from Voronezh.

The testimony is critical to the Investigative Committee’s version and the later charge laid against Savchenko of having crossed into Russia illegally through the Rostov oblast.

He claimed to have been travelling with a humanitarian load for refugees in a car borrowed from a friend and to have received 25 thousand roubles for this from volunteers. This large amount of money was supposedly to cover transport costs.  According to this version, on his way back he met Savchenko on the outskirts of (Russian) Donetsk.  She supposedly said that she was a refugee, and that her home, together with documents and money, had been bombed, and that her Ukrainian soldiers’ uniform had been given to her by the Kremlin-backed militants.  He claims to have agreed to give her a lift and dropped her in the Voronezh oblast, and to have given her 15 thousand roubles.

As if those details were not farcical enough, Miroshnikov’s story had not even been embellished with a semblance of credibility.  Asked by the defence to say who had provided him with the car, Miroshnikov claimed that the owner had asked him not to disclose his name.  The defence pointed out that the law required Miroshnikov to disclose this information, and for the owner to be summoned for questioning.

The court, as on all occasions, rejected the defence’s law-based demands and allowed Miroshnikov to not give the information.

The court also allowed him to conceal his phone number although this was crucial for ascertaining where he actually was on the relevant day.  The court rejected questions as to whether the 15 thousand roubles Miroshnikov is alleged to have so generously given away was a large amount of money, and whether he often gives people money.

On Wednesday, an FSB officer in disguise was questioned, together with a taxi driver and militants.

The FSB officer – Alexei Pochechuyev - appeared on the video in a wig with grey hair, makeup and glasses.

As reported earlier,  two men are claimed by the prosecution to have given Savchenko a lift after Miroshnikov ‘dropped her off’.  They are supposed to have been stopped by a traffic police officer who then passed Savchenko to the FSB.

The defence believes that since Pochechuyev couldn’t remember the questioning which he signed as having been part of, refused to give his age and appeared in comical disguise, that he may not have been the FSB officer at all.  More importantly, they assert that his story is fiction.

Savchenko herself says that there were five FSB officers in balaclavas.  Due to the disguise and bad quality of the video, she was unable to say whether the alleged Pochechuyev had been among those who interrogated her.

The only ‘witnesses’ to so far appear in court were a taxi driver working for the militants and some militants who were involved in Savchenko’s capture.  One of the latter’s allegations about Savchenko’s own words to them aroused the latter’s mirth.

It remains to be seen whether Igor Plotnytsky, now leader of the so-called Luhansk people’s republic who was directly involved in Savchenko’s capture, will be questioned.

His testimony, and especially the way it changes with the Investigative Committee’s version, is particularly indicative of the nature of this case.

So too, unfortunately, is the behaviour of the court which, has not only ignored Savchenko’s alibi, but rejects uncomfortable questions and allows the prosecution to conceal information which would confirm Savchenko’s total innocence.