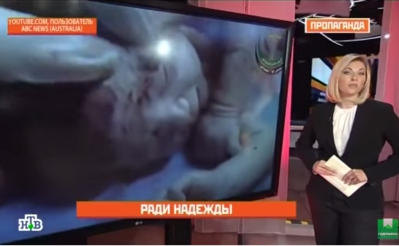 The baby whose name means Hope in Russia "for whom it’s all about", according to Russian TV

Less than two weeks after Russia began airstrikes in Syria, a large percentage of Russians have now changed their opinion and support the military intervention.  How could they not when all mainstream television channels are presenting Russia as the saviour and only country willing to properly fight the Islamic State?   TV NTV has even come up with a new programme called ‘Propaganda’ which on Oct 4 explained why Russian forces are waging “war against barbarians, sadists and monsters”, why the West’s ‘democracy’ has brought only chaos and destruction, and “why in the West they distort official commentaries” about the Russian bombing raids in Syria.

From the very beginning of this new programme, the presenter Jelena Milincic, a Moscow-based Serbian reporter for the Kremlin-funded RT (formerly Russia Today), stresses Russia’s role in saving lives.  The viewer is shown images of a Syrian new-born baby, injured in her mother’s womb.  Milincic explains that the baby’s name is Amel, which translates into Russian as Nadezhda [hope].  “This is all for little Nadya!”, she says, giving a whole new perspective to the bombing raids.  The narrative is, in fact, similar to that used in 2014 to justify Russia’s military engagement, supposedly through ‘volunteers’ in eastern Ukraine.  Then too, the media was full of claims that Ukrainian soldiers were committing atrocities, ‘genocide of the Russian-speaking population’, war crimes, etc.

Ukraine is out of the camera’s focus in this programme, though the villains in the West, especially the USA, remain the same, with their position particularly incomprehensible.  After all, the presenter stresses, this is a “war of the entire civilized world against barbarians”

It is this war that the viewer is to understand Russia is fighting.  The manipulative selection of video footage and commentary dismisses any suggestion that Russia could be bombing any but Islamic State [ISIS] targets or killing civilians as deliberate lies and ‘fakes’.

The viewers are assured that no land forces will be used, and no conscripts, while action against ISIS in Syria has the additional use of ensuring that “the five thousand Russian citizens now fighting with ISIS” will not return home to Russia.

And the West?   Well, “they don’t like Russia, but they like Bashar al-Assad even less and the tradition has been established in the West: if you don’t like somebody, you must overthrow, torture, kill them.  And all of course as part of the battle for democracy.”

We are then shown images and a list of what it was allegedly like in Iraq and Libya “before democracy” and “after democracy”, with the viewer left in no doubt about which was to be preferred.  Where dictators are ousted, “the middle ages” reign, with hideous images of ISIS atrocities.

US Barack Obama with his penchant for “democracy”, treated as a synonym for destruction and carnage, is contrasted to his Russian counterpart Vladimir Putin, who stated at the UN that he respected the choice of the Syrian people and therefore supported their “legitimately elected president”.  Putin, we learn, is not in favour of Assad, he is in favour of “playing by the rules”.  Just to demonstrate that Russia is not totally alone in defending sanity and civilization, “our old acquaintance”, the leader of France’s far-right National Front, Marine Le Pen” is quoted as also supporting the Syrian dictator.

The overt mirroring of regular exposes of Russian propaganda and fakes is new, but the basic narrative can be found on all mainstream Russian television channels.

Small wonder then that the latest Levada Centre survey, carried out from Oct 2-5, found a significant increase in the number of Russians who saw the Islamic State as a threat – 72%, whereas in the Spring ISIS was scarcely mentioned.  46% support the Federation Council’s decision to permit the use of Russian forces abroad, whereas in  September 69% were against direct military support for Syria’s leaders.  47% are in favour of “supporting Assad in his fight with the Islamic State and the opposition.  Only 8% believe that Russia should join the western coalition in its fight against the Islamic State and the Assad regime.

Most of the respondents are probably unaware of the latest reports suggesting that Isis has made significant gains thanks to Russia’s bombing of the opposition in the west of Aleppo and key areas.  They will be equally oblivious to the allegations made by Human Rights Watch that new Russian-made cluster munitions are being used in Syria.

In fact, however, with Russia presented as saviour, defending those “who play by the rules’,   and the west as slandering those fighting barbarism while failing to do anything itself, why would they believe them?