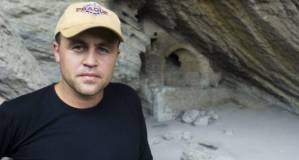 The first sentence has been passed in a criminal prosecution over a pre-annexation demonstration that Crimea under Russian occupation had no right to initiate and which is overtly directed against Crimean Tatars.  In a particularly nasty twist, the court claimed that Eskender Nebiyev had not only admitted ‘guilt’, but had also testified against the Deputy Head of the Mejlis, or Crimean Tatar representative assembly Akhtem Chiygoz.  The claims have been rejected as "cynical provocation".

As reported, Eskender Nebiyev, a cameraman for the independent Crimean Tatar TV channel ATR, was arrested on Friday evening over the charges against him in connection with the demonstration in Crimea on Feb 26, 2014.  Nebiyev had earlier spent two months in detention, before being released pending trial, and the move seemed directly linked with his statements regarding the situation with his father.

Bekir Nebiyev was wanted for questioning over the recent shooting of an ambulance crew in which two medical workers were killed.   It remains unclear how strong the evidence was against Nebiyev Senior who disappeared shortly after the shooting.

The police had cordoned off a large predominantly Crimean Tatar area and carried out constant searches, interrogations, etc.   It is therefore worrying that there are even conflicting stories as to who found the body of Bekir Nebiyev in that area the day after Eskender Nebiyev was re-arrested and why the police had not earlier found his body.  The body was badly damaged, with the de facto prosecutor claiming that this is because wild animals mauled it.  The occupation regime is clearly planning to claim suicide and terminate the case, though this leaves a large number of questions unanswered.

The prosecutor had apparently demanded a real sentence of 1 year and 10 months, with the investigators having supposedly established that “acting in accordance with the commands of the organizer of an unauthorized demonstration Akhtem Chiygoz, he carried out a crime of grave public impact”.

The judge Yury Gulevich asserted in his sentence that “Nebiyev and others dealt blows and kicks, using various means and spraying with gas canisters, pushing out members of the ‘Russian Unity’ demonstration.  Nebiyev himself dealt several blows to an unidentified individual”.

He also claimed that “the defendant fulfilled all conditions of his pre-trial agreement and gave testimony against the organizers of the mass disturbances”.

This is denied by Nebiyev’s lawyer Dzhemil Temishev.  He told Radio Svoboda’s Crimean Service that Nebiyev had indeed agreed to admit guilt but had not testified against Chiygoz, saying only that he had seen him at the demonstration.  Nebiyev had not, he said, given any testimony that could hurt other people facing charges.

Refat Chubarov, Head of the Crimean Tatar Mejlis also condemned the suggestion that Nebiyev could have given false testimony.  “He was always honest, and I’m convinced that he has remained so.”

“It appears that Crimea has entered a phase of cynical provocation by the Russian security service for whom human life is nothing but convenient material in their evil plans to subdue people”.

There were two demonstrations outside the Crimean parliament on Feb 26, 2014, the day before Russian soldiers seized control, however only one has resulted in these surreal charges of participation in mass disturbances.

There were around 10 thousand Crimean Tatars and Maidan supporters who gathered outside the parliament building in Simferopol because they feared plans were underway to push through a bill changing Crimea’s status.  They were opposed by a smaller number of pro-Russian demonstrators led by Sergei Aksyonov, then the leader of a marginal pro-Russian party in the Crimean parliament.  Aksyonov was installed as self-proclaimed leader the following day after Russian soldiers seized control.

Radio Svoboda reported at the time of Chiygoz’s arrest that their video footage clearly showed all representatives of the Mejlis seeking only to calm the crowd and prevent bloodshed.   This has been confirmed by a Russian journalist Pavel Kanygin, writing for Novaya Gazeta, and present that day, as well as by dozens of witnesses.

Russia is in breach of its own Criminal Code which does not permit criminal prosecutions against foreign nationals for alleged offences carried out on the territory of another country and not directed against Russian citizens or the interests of the Russian Federation.

The de facto prosecutor Natalya Poklonskaya, judges in Crimea, as well as Russia’s Investigative Committee are all simply ignoring this.

The first arrest was of Akhtem Chiygoz, Deputy Head of the Mejlis, on Jan 29, 2015.  There appears to be only one reason for holding two other people – Ali Asanov and Mustafa Degermendzhy in detention, that being to extract false testimony against Akhtem Chiygoz, – or to punish them for not giving it.  Asanov and his family have reported from the outset that he was clearly told that he would be freed if he denounced Chiygoz.  Asanov is the only breadwinner, and has four small children and an ailing father, all of whom the occupation regime is using as hostages.   On Wednesday, a different court in Simferopol extended Asanov’s detention until Nov 19.