Tourists Beware: Putin’s KGB-Kafkaesque Justice is for Foreigners Too24-year sentence in Russia’s ‘Ukrainian Chechnya fighter’ show trialThe Chilling side to Russia’s claims about Yatsenyuk as Chechnya fighterIn Putin’s next show trial, Ukrainians are cast as Chechnya separatist fightersWhere being Ukrainian is as good as being guiltyMoscow shouts ‘abduction’ yet holds Ukrainian hostages incommunicadoRussia holds 72-year-old Ukrainian hostage on absurd spying chargesRussian mother of 7 stands by her warning about Russian soldiers in UkraineRussian Mother of 7 accused of ‘treason’ released from custodyRussians call to release mother of 7 accused of revealing ’state secrets’Russian woman charged with ‘treason’ for reporting soldiers sent to UkraineRussian Newspeak: “Killed at exercises on the border with Ukraine”Russian soldiers’ deaths in Ukraine: A web of lies and fake social network pagesMore Russians aware that their sons are being sent to fight and die in UkrainePersecution of elderly activist exposing Russian soldiers’ deaths in Ukraine continuesRussian rights activist investigating soldiers’ deaths in Ukraine arrestedRussia continues lying about solders’ deaths in UkraineFirst reports on Pro-Kremlin TV of Russian soldiers killed in UkraineEntire Pskov paratrooper regiment killed in Ukraine?More Russian conscripts forced to fight in Ukraine
• Topics / News from the CIS countries 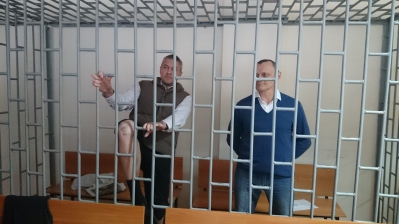 The respected Memorial Human Rights Centre has analysed the prosecution’s case against two Ukrainians accused of fighting against federal forces in Chechnya and found it lacking in everything but lurid ‘confessions’.  Their analysis confirms that there is no evidence that any of the torture and atrocities took place, let alone that Mykola Karpyuk and Stanislav Klykh were involved.  Earlier in October, however, Judge Vakhit Ismailov rejected the defence’s application to have detailed allegations regarding the torture which the defendants were subjected to added to the case.  On Oct 26, the court also rejected the defence’s application, backed by guarantees from the Ukrainian consulate, to release the two men on bail.  Both were further remanded in custody until Feb 27, 2016, by which time Karpyuk will have been in Russian custody for almost 2 years, Klykh for a year and a half.  During the hearing, Klykh raised his trouser leg to demonstrate a scar from ’interrogation methods’ used throughout the months when he, like Karpyuk, was held incommunicado with no access to proper lawyers. The Ukrainian consul has only now been able to see Karpyuk and Klykh.  According to lawyer Ilya Novikov, who will also be representing Karpyuk, the consul reports that even after a year or year and a half, both men have numerous scars confirming their allegations of torture

As reported. the Russian prosecution claims that Klykh and Karpyuk were members of the Ukrainian nationalist organization UNA-UNSO and that at the end of 1994 and beginning of 1995 they were part of an armed formation of the self-proclaimed Chechen Republic of Ichkeria and fought against Russian federal forces.

They are accused, in fact, of doing the same thing as thousands of Russian so-called ‘volunteers’ whom Russia has been sending to eastern Ukraine to fight against the Ukrainian army.  Karpyuk and Klykh, however, are accused of killing at least 30 Russian soldiers and other crimes, and face sentences of up to life imprisonment.

In fact, Klykh was at the time of the impugned crimes taking university exams in Kyiv, which can be proven.  Karpyuk was looking after his dying mother, and while there may not be easily obtainable documents, there is certainly witness testimony.  Should the court in Russia wish to hear this, which at present seems questionable.

The Russian rights NGO  first analysed the charges themselves which give rise to a huge number of doubts.  Karpyuk is accused of having led an armed gang called ‘Viking’, and Klykh of having been in this gang.  Both are accused of having murdered two or more people carrying out their duty, and of attempted murder.

1. In using the article of the Criminal Code on ‘banditry’, the prosecution has not provided any justification for the charges of organizing and heading such a gang and has extremely loosely and without any proof defined the period of time during which this alleged gang was supposedly active.  It has also failed to describe the alleged crimes committed in a manner complying with this article.  “As a result, the very charge of banditry is in doubt.”

2.  The indictment is based on confessions.

“Instead of substantiating or refuting these confessions with objective material, the investigators are trying to give them weight, using a ‘lie detector’.  There are numerous signs that the evidence in the case is based on slander and self-incrimination.”

3.  Even had the actions been committed, the articles of the Criminal Code are subject to a time bar, with the period during which charges can be laid having passed.

It should be noted that Karpyuk’s lawyer Dokka Ishlayev lodged two applications with the court on Oct 13 to have material regarding the torture his client says he was subjected to included and to have the charges dropped due to the time bar.  Both applications were rejected.

4.  Although the indictment contains testimony from the defendants, as well as Alexander Malofeyev, the mystery Ukrainian already sentenced to 24 years, and even a ‘confession’ from Karpyuk that he played a direct role in torturing and murdering 12 captured soldiers, he is not charged with this crime.

There is also no witness testimony regarding this alleged ‘torture and murder’, and no documentary proof of the bodies of these soldiers having been found, or even of a group of soldiers having gone missing.

“All of this gives grounds for concluding that the episodes with torture and murder of captured soldiers are fictitious, that the defendants gave false testimony against themselves on the initiative of the investigative bodies in order to put the defendants into as negative a light as possible, in particular so as to have an emotional effect on the judge and jury.”

In the second part of their analysis, Memorial focuses on the numerous factual discrepancies in the prosecution’s case.

The term Islamic State began to be used in the mid-2000s.  It reached the North Caucuses only at the end of 2014 – when the indictment was being written.

This is just one of the innumerable inaccuracies pointed out by the Memorial Human Rights Centre which has been defending the victims of rights abuses and monitoring the situation in the North Caucuses for the last 20 years.  The key field commanders active at the time of the impugned fighting are simply not mentioned at all, and the supposed aim and direction of the attack is nothing like what was in fact the case.

Memorial gives geographical and military details to totally undermine the prosecution’s claims about the allegedly main events on Minutka Square in Grozny.

“It is evident that in the first days of January a group of soldiers, a part of whom, according to the indictment, were shot, others taken prisoner, could not been on Minutka Square at all.”  In the 20 years that have passed since then, Memorial stresses, there is clearly nothing to indicate that such an event took place at all.  Yet it is here, according to the indictment, that the most heinous and memorable crimes are supposed to have been committed.

The same bloody scenes are repeated on several occasions in the indictment.  The rebels are supposed to have fired on Russian soldiers and killed 30 of them in a matter of minutes.   The victims remain unnamed and the whole event is probably fictitious.

A large number of real soldiers who died in Chechnya are presented as being victims of this ‘gang’.  The ‘gang members’, however, are supposed to have been armed with Kalashnikov and sniper rifles.  The investigators seem unperturbed by the fact that almost every victim was killed by mortar fire and similar.

There is evidence of two Ukrainians having fought in Chechnya – Oleksandr Muzychko [Sashko Bily] and Oleh Chelnov.  There is nothing to indicate that there was a whole unit of Ukrainians – one filled with people like Ukraine’s Prime Minister Arsen Yatsenyuk, though this would surely have been remembered.

There was a real New Year storming of Grozny which failed.  Memorial notes that the Russian media began talking of numerous “Ukrainian mercenaries” only several days later, needing some excuse for the failure.

Memorial gives a damning assessment of Alexander Malofeyev’s testimony which is far removed from reality, from other material in the case and is full of self-contradictions.

Further analysis will follow but Memorial believes it has provided enough detail to make it clear that the indictment gives the impression of a document hastily put together by incompetent officials with little knowledge of the subject.

There is every reason to believe that they knew about torture since all of the above-mentioned details were part of now retracted ‘confessions’ from Karpyuk and Klykh.

See also:  24-year sentence in Russia’s ‘Ukrainian Chechnya fighter’ show trial, and the extraordinary allegations from the head of Russia's Investigative Committee here: The Chilling side to Russia’s claims about Yatsenyuk as Chechnya fighter

Advice on writing and more details here: Oppose Russian tyranny with your pen!