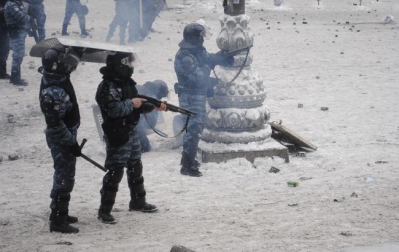 Two former Berkut special force officers – Serhiy Zinchenko and Pavlo Abroskin – are on trial, charged with direct involvement in the killing of 39 activists.  The men’s lawyers say that their clients do not deny being on Institutska St, but they assert that there is no proof that they shot any of the victims.  Since they could face life imprisonment, their lawyers back in March this year applied for and were granted Ukraine’s version of ‘trial by jury’.  In such cases, the court is made up of two professional judges and three jurors.  The role of the jurors is fairly limited – even in a situation where the three jurors were in agreement, they could not override the position of the two judges.  They nonetheless serve as lay judges, and must be selected in the proper manner.

The trial is taking place at the Svyatoshynsky District Court in Kyiv, with two judges - presiding judge Serhiy Dyachuk and Marina Ozdoba, as well as one reserve judge – Andriy Skoryn.  The problem lies in the way that the three jury members, finally appointed in July, were selected.

A list of 13 ‘jury members’ for that particular court was agreed at a meeting of the Kyiv City Council in April.  According to the Advocacy Advisory Panel, an initiative of lawyers representing Euromaidan victims and their families, the list was effectively put together using people already on the list for ‘people’s assessors’, although the 2012 Criminal Procedure Code specifically prohibits the same people serving as people’s assessors and as jurors.

There was absolutely no openness about the selection process, nor any announcement that jurors were being sought so that members of the public could put themselves forward.

At a press briefing on Oct 20, the members of the Advocacy Advisory Panel pointed out that the ‘jurors’ thus selected could in no way be considered representative of the population.  There can also be suspicion of a conflict of interests since many on the original list were themselves ex-police officers, wives of officers,   etc.  Three men from this list were finally selected on July 6 this year.

In fact, even without any reservations about individual jurors, the very process was so flawed that it is quite likely that any verdict, whether it found the men guilty or acquitted them, will be challenged.  This is acknowledged by the two defendants’ lawyers, as well as the Advocacy Advisory Panel.  An appeal against the decision regarding jurors has now been lodged with the District Administrative Court in Kyiv.  Vitaly Tytych from the Advocacy Advisory Panel suggests that a new list of potential jurors should now be drawn up in full compliance with procedural requirements and with the opportunity for ordinary Ukrainians to put themselves forward as candidates.

Zinchenko and Abroskin have been in custody since April last year, however their commander Dmytro Sadovnyk is in hiding, after being released on ‘house arrest’ in September last year.  There was anger at the time, and the Prosecutor General’s Office apparently initiated a criminal investigation against the judge – Svitlana Volkova – who had ordered Sadovnyk’s release.  Nothing more has been heard of that criminal investigation.

There is no information either about Judge Yekaterina Sereda from the Pechersky District Court who in July this year released Tavakkul Ragimov from custody.  Ragimov was a current police officer who had not even been suspended from his job in the police force despite being charged with heading a group of ‘titushki’, or paid thugs involved in abductions; assaults; torture; robbery, etc. during Euromaidan.  He was, in fact, placed under house arrest because it was assumed that as a police officer, he would not abscond.  This is in marked contrast to cases involving much less serious crimes where people are taken into custody.

On Oct 16, Judge Larissa Tsokol from the Pechersky District Court ruled that another suspect Anatoly Logvinenko could have his electronic bracelet removed.  It remains to be seen whether he turns up at the next court hearing over serious charges relating to an ambush and violent attack on Automaidan activists on Jan 23, 2014.

Yevhen Antonov, head of the Berkut regiment involved in the violent attack on Maidan activists at 4 a.m. on Nov 30, 2013, remains in his post.  On Oct 22, the Special Investigations Department issued a statement pointing out that prosecutions were ordered over four Berkut heads, including Antonov.  In January this year, on the investigator’s application Antonov was suspended for two months and placed under house arrest and prohibited from talking to witnesses, most of whom are his subordinates at work.  The appeal court changed the restraint measure to house arrest during the night.  The investigators asked for the suspension to be extended, however the judge unwarrantedly rejected this, meaning that Antonov was able to return to his post in which he constantly communicates with the witnesses.  The Special Investigations Department notes that during their appeal against Antonov’s reinstatement, the Kyiv police unexpectedly asked the court to uphold the reinstatement.  Whether this was the reason for the appeal court’s ruling is not known, but Antonov’s reinstatement was allowed and the appeal rejected.  The court examination is continuing.  The Department stresses that the investigators have done all that they could, and points out that this is not the only such case.

It will soon be two years since unarmed Maidan protesters were gunned down in the centre of Kyiv, and despite all the promises, there has been pitiful progress in ensuring prosecutions of those suspected of even the gravest crimes.

Oleksandra Matviychuk, Head of the Centre for Civil Liberties, is clear where the problem lies.  In a recent interview she explained that “these crimes are being investigated and decisions taken by people who were themselves directly involved in committing them.”  She says that this can result in anecdotal situations where Automaidan activists turn up to provide information for the investigators about how they were beaten up, etc. only to find the same people who beat them taking their evidence.

Matviychuk is convinced that if an international element is not introduced, they cannot hope for the results that the public expect.  Also, however, the special department set up within the Prosecutor General’s Office needs to be given greater guarantees of independence and also better financial and technical assistance. That requires political will.  The legitimate means available for ensuring that judges do not abuse their position, under the guise of judicial independence, must also be applied.

As the second anniversary of Euromaidan approaches, they are planning, together with the lawyers representing Nebesna Sotnya [those killed during Euromaidan] and their families, to initiate an information campaign.  It is vital to ensure public demand for a proper investigation and answers to specific questions.  Why, for example, are 14 Berkut officers identified back in January 2014 still working and not even witnesses, let alone suspects, in the investigation into the Jan 23 attack on Automaidan activists?

Berkut and other police officers regularly appear at all court hearings, providing moral support for former colleagues.  Maidan supporters, those wanting justice for the victims seldom turn up, and here Matviychuk is blunt.  It is the public who must be active and show those under investigation, and the authorities, that they are monitoring the investigation and will do more to achieve justice than simply express indignation on social network pages.