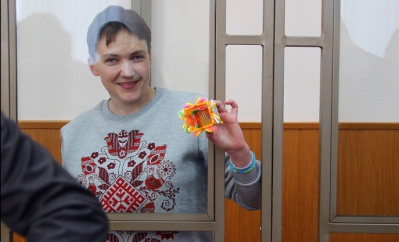 It was clear well over a year ago that Russia’s Investigative Committee had badly miscalculated in its prosecution of former military pilot Nadiya Savchenko.  Given Moscow’s grim determination to continue anyway, the investigators really could have come up with a better story.  Instead, each hearing is filled with absurdly implausible details and raises even more inconvenient questions.  These include why some witnesses for the prosecution should be top secret and why the court should have rejected, as ‘premature’, the defence’s application to interview the most crucial witness, namely Nadiya Savchenko’s sister, Vera.  Just last week Vera Savchenko had been told she was banned from Russia for five years, so her testimony before the authorities change their minds again would seem anything but premature.

Both hearings, on Oct 19 and 21, were of militants fighting on the side of the Kremlin-backed and self-styled ‘Luhansk people’s republic.  There was no obvious reason why the witness, identified as Pyotr Surkov, on Wednesday was so top secret that he himself was not shown and his voice was changed.

Sergei Zakruzhny from Open Russia points out that Surkov’s testimony, as the person who allegedly filmed Savchenko’s interrogation was uninteresting.  The defence has posited three versions as to why, when most militants are coming to the court and giving testimony, this ‘Surkov’ should be so secret.  They had previously assumed that the person was a Chechen, who Savchenko believes was called Adam Umarov.

As reported here, she had told this person who was looking for an artillery corrector, that he could regard her as the person.  She explained that she had said this since she was already captured, the person they were looking for was not (see: Nadiya Savchenko: “You can call me the artillery spotter”  ).  Savchenko did not, however, recognize the person as having been Umarov,   leaving two other possibilities.  The secret witness was an FSB [Russian Security Service] officer in Luhansk at the time, or he was a Russian soldier – one of those whose presence, fighting and sometimes deaths in Donbas, continues to be denied in Moscow.   Either way, his identity would be incriminating.

Huge amounts of ‘evidence’ were simply read out in court, including 80 pages from a report on satellite communications antennae.  Defence lawyer Ilya Novikov was dismissive, saying that the “most amusing thing” is that when they present just 10 pages of similar information, providing an unbreakable alibi for Savchenko, it will surely be rejected.

The other ‘witnesses’ are memorable for how much they allegedly ‘don’t remember’.

Sergei Moiseyev, a Russian national, is supposed to have driven the car in which Savchenko was taken to Luhansk, and to the Russian border.

He claims that he first saw Savchenko “after lunch”, which is the line taken by the prosecution and refuted by telephone records.  He says that she told him she was an artillery spotter, though can’t remember any exact details.

Most significantly, he ‘could not remember’ whom he gave Savchenko’s things to, nor whether she had a rucksack on her or whether it was brought to him by other militants.  He doesn’t remember the colour of her telephone, the colour of the alleged rucksack and what the map taken from her looked like. “The faster Novikov asks questions, the slower Moiseyev answers. He says “I don’t remember anything” to almost all questions”.

He supposedly knew exactly why he had personally taken the decision to drive Savchenko to one specific place (the settlement Severny) but didn’t remember where he dropped her, where Severny is or even how far from Luhansk.

At that point the judge tried to stop the questioning, claiming that Novikov was asking the same questions.  The latter answered that he was not getting answers to them, at which point Nadiya Savchenko called out that Moiseyev was doubtless no idiot and should show them on a map where Severny is.  She then made her disgust plain when the judges consulted and decided not to show Moiseyev a map.

This is not the first time that the judges have resisted the defence’s application to have maps demonstrating the locations in question used in court.

The defence did, however, get Moiseyev’s earlier testimony read out due to numerous contradictions with his ’amnesia’ in court.

Another witness was Yevgeny Kolomiyets, an aide to Igor Plotnytsky, as of Oct 22 still leader of ‘LNR’.  He claimed that Savchenko had had a rucksack, machine gun, binoculars and maps and that he had shown all of this to Plotnytsky. “The funniest thing was that several months later Kolomiyets [allegedly] collected up all the things that supposedly belonged to Savchenko, put them in a packet and gave them to a stranger. Seriously, to an absolute stranger who was bringing a humanitarian load to LNR. “   The stranger was supposed to be returning to Moscow region and to hand the Investigative Committee these things.

Unsurprisingly, there is no sign of the things, though in fact this story clashes with Plotnytsky’s given during two earlier visits to Russia.

An earlier witness, Yegor Russky claimed that he had given the laptop on which he saved the original of the video in which Savchenko was interrogated to a militant friend.  The latter was killed and, lo and behold, there was no laptop to be seen.

There is, in fact, none of the equipment which Savchenko would have needed to make the prosecution’s story even physically possible.  The lack of this, however, has proven to concern the court as little as the fact that Savchenko had already been captured when the two Russian journalists were killed.