That Time A Russian OSCE Monitor In Ukraine Got Drunk, Said Too Much 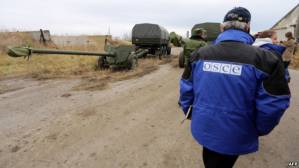 OSCE observers check a column of 15 MT-12 Rapira 100-mm antitank guns being withdrawn by Russian-backed separatists from Donetsk to the village of Zelene on October 28.

A Russian member of the Organization for Security and Cooperation in Europe’s (OSCE) Special Monitoring Mission in eastern Ukraine has lost his job after revealing his lack of impartiality.

The Ukrainian-language TSN new channel, a partner of Ukraine Today, on October 27 aired video footageof a man identified as Maksim Udovichenko revealing his past as a Russian military officer and giving locals his opinion on the situation in Ukraine.

In one video, he is seen speaking to an elderly woman in a city identified as Severodonetsk, a government-controlled city in eastern Ukraine. "This is all rubbish, you know, your Ukraine is rubbish, " he says. "There is the great Russia, you know. It stands near."

In another, an apparently drunk and secretly recorded Udovichenko is shown telling unseen individuals inside a hotel room that he is a retired lieutenant colonel with the Special Purpose Forces, known as Spetsnaz, and served as a commander of a military unit in Chechnya in 1994.

Holding a bottle of beer, Udovichenko says he retired from the Russian Army in 2010, and also explains the circumstance of how he came to be an OSCE monitor.

The Special Monitoring Mission to Ukraine (SMMU) issued a statement on its Facebook page shortly after the TSN report aired.

The OSCE’s SMMU announced that, "following an incident in Severodonetsk last week of highly inappropriate behavior", immediate steps were taken to "separate the individual from the mission."

The OSCE says Udovichenko was fired immediately after the report appeared for the violation of the organization’s Code of Conduct.

"The Code of Conduct violation [in his case] was the abuse of alcohol and also the Code of Conduct requires all monitors to act with highest standards of professionalism and impartiality, " the mission’s spokesman Michael Bociurkiw told RFE/RL by telephone.

"His unacceptable conduct was observed and action was immediately taken to separate him from the mission, so he is no longer part of our mission, " Bociurkiw added.

TSN has boasted that it uncovered an agent from an "aggressor country" who "didn’t hesitate to promote the ’Russian world.’"

Ukraine Today, meanwhile, has raised concerns that the videos "could spark concerns over the OSCE’s impartiality and objectivity, especially with Moscow’s influential role in the Ukraine conflict."

Other Ukrainian media have portrayed Udovichenko as a "drunken Russian spy" who was exposed by journalists.

Bociurkiw said that the OSCE mission in Ukraine has nearly 600 monitors from more than 40 countries, including about 35 observers from Russia.

The spokesman pointed out that more than 50 percent of the monitors are former military personnel and members of law enforcement agencies.

"It would be very unfortunate if the conduct of one individual tarnished the reputation of the mission and entire work of monitors, " he said.