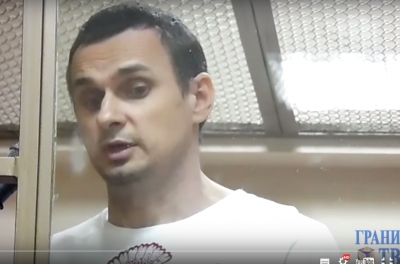 A vital defamation hearing is finally taking place on Monday, Nov 2, brought by Ukrainian filmmaker Oleg Sentsov against Russia’s FSB [Security Service] and media.  While it has little or no chance of success, it is important in highlighting the way in which the FSB presented four Crimeans as ‘terrorists’, with this obediently parroted by most Russian media.  Despite the FSB’s failure to prove any terrorism, or in Sentsov’s case any offence at all, a Russian court sentenced Sentsov to 20 years imprisonment, and civic activist Oleksandr Kolchenko to 10 years.

Sentsov, Kolchenko, and two other opponents of Russia’s occupation of Crimea – Gennady Afanasyev and Oleksy Chirniy were all detained in May 2014 and held incommunicado, first in Simferopol, then in Moscow.

It was on May 30, five days after Ukraine’s parliamentary elections had given the lie to Russia’s propaganda about a ‘Right Sector fascist coup” in Ukraine that the FSB finally revealed details about the charges against the four men.  The FSB claimed that the four were members of a Right Sector ‘diversionary terrorist group’.  The group had supposedly been plotting to carry out ‘diversionary-terrorist’ acts in Simferopol; Yalta and Sevastopol, and in the last of these to destroy a number of buildings, railway bridges and power lines.

No details were given of the alleged ‘diversionary-terrorist’ acts, to destroy buildings, etc.  The report alleged that they had planned bomb attacks during the early hours of May 9 [Victory Day] near the Eternal Flame and a Lenin monument in Simferopol.  It also added two firebomb attacks on the offices of the “Russian Community of Crimea” on April 14 and the United Russia party offices in Simferopol on April 18.  Searches had allegedly found ‘explosive substances; firearms; ammunitions; canisters with inflammatory liquid; construction masks (similar to those used during the disturbances on Maidan); respirators; gas masks; aerosol cans with paint; nationalist symbols, etc.”

Russian TV channels have over recent years collaborated closely with the FSB and this case was no exception.  Channel One entitled its report “Right Sector saboteurs’ plans to carry out terrorist acts on Victory Day have been foiled” and showed Afanasyev and Chirniy ‘confessing’.

On July 31, 2015, during the trial of Sentsov and Kolchenko, Afanasyev refused to testify and retracted all evidence saying that it had been tortured out of him.  His account of the torture is very similar to the complaints consistently made and ignored by Sentsov, and to some extent Kolchenko.

All of the Russian TV reports focused on Sentsov whose active participation in the AutoMaidan movement [linked with EuroMaidan] is stressed.  Sentsov has said from the beginning that he was warned that if he didn’t ‘confess’ and give testimony against Maidan, that they would say that he was the mastermind and imprison him for much longer.

There is literally no evidence against Sentsov, aside from the testimony of Chirniy and Afanasyev.  Chirniy was not prepared to retract it, but refused to give testimony in court where he would have had to face cross examination, and Afanasyev has provided details of the torture he was subjected to.

The Memorial Human Rights Centre first declared Sentsov and Kolchenko political prisoners, and then also Afanasyev.  Its conclusions about the case and prosecution of all four men are quite damning.

Yet on Aug 25 the military court in Rostov on the Don (under judges: Sergei Mikhailyuk,  Viacheslav Korsakov and Edward Korobenko) found both men guilty of all charges presented by prosecutor Igor Tkachenko.  Sentsov, as supposed ‘mastermind’ of the alleged terrorist group was sentenced to 20 years, Kolchenko to 10.

As the sentences were being read out, Oleg Sentsov and Oleksandr Kolchenko joined arms and sang the Ukrainian national anthem.

The letters are most likely to get through if you say nothing about their cases (criticism of the Kremlin should also be deferred to another occasion!).

ANY words of support will be appreciated, and are an important message to Moscow that the men – and their illegal imprisonment – are not forgotten.