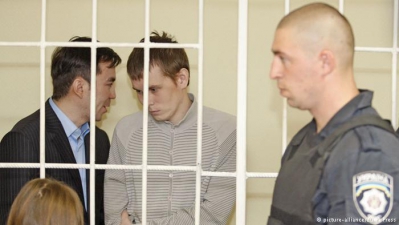 Russia’s Defence Ministry has officially denied that Aleksandr Aleksandrov and Yevgeny Yerofeyev, captured in eastern Ukraine this May were Russian intelligence officers, however the men’s lawyers are seeking to have them recognized as prisoners of war who cannot be tried.

As reported here, the two men have radically changed their story since May.  At that time they consistently confirmed to OSCE representatives, a Russian journalist, a well-known Russian human rights activist and others that they were serving Russian military intelligence [GRU] officers.  At that time Russia claimed that the two had left the military at the end of 2014 and that they were in Donbas on their own initiative.  Both men complained that they were being prevented from speaking to their families.

Yerofeyev had shifted his position before the preliminary hearing at the end of September. It was learned only a week ago that Aleksandrov’s family had taken on a new lawyer, with it suggested then that both men might now claim to have been in the ‘LNR militia’, as Russia has maintained.

Aleksandrov’s new lawyer Yury Hrabovsky spoke to Interfax Ukraine about the trial.  It was he who informed that Russia’s Defence Ministry had officially ‘confirmed’ that the men had not been military servicemen, but working on contract for the ‘people’s militia’ of the so-called ‘Luhansk people’s republic’ [LNR].

On contract suggests that the line now taken is that they were not strictly volunteers, but were receiving payment for their services to the heavily Kremlin-funded ‘republic’.

Hrabovsky said that the defence was “in principle” happy with the decision of the Holosiyivsky District Court in Kyiv to schedule the trial on the actual charges for Nov 10.  He asserts that they will prove their clients’ innocence and that all evidence for this will be provided taking the Geneva Convention into account.

“Since prisoners of war cannot be tried at all, and the prosecution has effectively recognized them as POW, yet is legally denying this status”.

When asked how the defence would argue that they were POW, he stated only really that the Geneva Convention clearly regulates all answers, and noted that the USA has widely used “such practice” regarding its soldiers who fought in Iraq and Afghanistan.

He ignored the obvious difference between the cases.  US soldiers in Iraq and Afghanistan have US soldier status which America is in no way denying.  Russia, on the other hand, has constantly denied, in the face of substantial evidence, that it is involved in the military conflict in Donbas. It is now claiming that the men were on their own and that they had, as Russian nationals, signed some kind of contract with formations which in May 2015 were still actively fighting the Ukrainian army.

Russia is, in fact, suggesting that they were doing what they claim two Ukrainians – Mykola Karpyuk and Stanislav Klykh – did in Chechnya in 1994-95.  Both Ukrainians can prove that they were never even in Chechnya, let alone fighting on the side of Chechen rebels, unlike Yerofeyev and Aleksandrov who were both injured during fighting near Shchastya in the Luhansk oblast.

Both men’s lawyers are now clearly following the same position.  Oksana Sokolovska, Yerofeyev’s lawyer, told RIA Novosti that the defence have lodged a law suit with the High Administrative Court to President Petro Poroshenko as representative of Ukraine to have the Russians declared prisoners of war within the framework of the Geneva Convention and the protocols to it.  The third parties, she says, are Ukraine’s SBU [Security Service] and Prosecutor General’s Office. She did not present any further argumentation, simply mentioning that the Geneva Convention has been ratified by Ukraine.

Aleksandrov and Yerofeyev were captured on May 16 near Shchastya in the Luhansk oblast.   Both were injured and Aleksandrov has undergone a serious operation which, according to the doctors, enabled them to save his leg.  They were held in a military hospital before being transferred to a SIZO or remand prison.  The trial is on charges of terrorism.

They were visited in hospital on May 20 by representatives of the OSCE Monitoring Mission who pointed out that they spoke to them “without the presence of Ukrainian authorities” and that both had said that they were Russian military servicemen on a reconnaissance mission.

Soon afterwards they were visited by Sergei Krivenko, a well-known Russian human rights activist and member of the Human Rights Council.  In his report , he stated that Sergeant Aleksandrov and Captain Yerofeyev had denied Russia’s claim that they were no longer in military service and had asked for help in contacting their families as all phone numbers that they had were either blocked, or didn’t answer.  Their main concern, he said, was that they were being prevented from contacting their families, and they were asking Krivenko and the Human Rights Council to help. All of this coincided with the report by Pavel Kanygin from the Russian independent newspaper Novaya Gazeta first spoke to the men on May 22, then visited them again at the end of the month.

The court on Tues, Nov 3 extended the detention of both men for a further two months.  They are charged with organizing and taking part in military conflict against Ukraine, smuggling weapons and ammunition, helping a terrorist organization or carrying out a terrorist act leading to the death of Ukrainian military servicemen and other grave consequences.