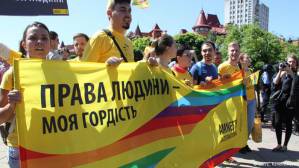 Ukraine’s Verkhovna Rada has failed to support a key provision on prohibiting the discrimination of sexual minorities in the new Labour Code.  This is a critical requirement for the EU to waive visa requirements, but even this was not enough to overcome many MPs’ resistance to the move.  There had even been difficulty getting the anti-discrimination provisions put to the vote, and on Thursday morning, the specific amendment received only 117 votes, with 226 needed.

Judging by a post from one MP who did support the amendment, prohibiting discrimination on the grounds of sexual orientation when employing somebody, MPs feel conflicting pressure.  In Volodymyr Aryev’s case he voted for the amendment as this is a condition for EU visa liberalization.  He says that he favours real European integration, not just in words, and not just for the selected few.  “This process is linked with difficult decisions”, he says and quite clearly feels the need to justify himself.

The rejected amendment is depressingly ordinary.  It prohibits discrimination on racial, political and religious grounds, as well as on the basis of gender, sexual orientation, family or financial position, participation in strikes, or because of suspected or confirmed AIDS.

MPs, it should be stressed, rejected the amendment at the first hurdle, with only 117 voting to consider the amendment when preparing the document for the second reading.   A suspiciously large number of MPs were absent, and many abstained, rather than voting against.

The battle to get this provision included has been going on for a long time.  In September 2013, members of the LGBT community addressed an open letter to the EU asking it to not back down after Valeria Lutkovska, Human Rights Ombudsperson and several MPs said that they would be asking the European Commission to waive the requirement on amendments to anti-discrimination legislation. At the time Amnesty International also expressed outrage at the suggestion that the requirement be waived.

At the time, there were also assiduous attempts by members of the then ruling Party of the Regions to introduce legislation similar to that in Russia prohibiting something termed ‘propaganda of homosexuality’.

EuroMaidan began almost exactly two years ago after Viktor Yanukovych’s rejection of the EU-Ukraine Association Agreement.  The very name suggests that Ukrainians were upholding their right to move closer to the European Union.  It is frustrating that MPs are forgetting this.