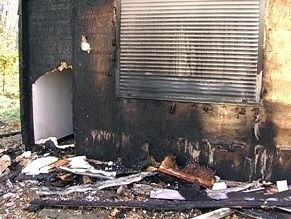 In the second arson attack in less than 2 months, an ohel, or small chapel-like structure for prayer at the grave of a tsadik, or righteous person, has been set alight in the Memorial Jewish Cemetery in Kolomyia [Ivano-Frankivsk oblast]

The vandals used some kind of Molotov cocktail to set fire to the ohel at the grave of Tsadik Gillel Borukh of Lichtenstein who was Chief Rabbi of Kolomyia in the 19th century.  The attack took place in the night, around 3 a.m. and caused considerable damage.

The first attack took place during the night from Sept 18-19, the first Sabbath of the new year according to the Jewish religious calendar.  On that occasion, the police arrived at the scene before the fire brigade and managed to put out the fire.  The previous night, the wrought-iron gate from the cemetery railing had been cut up and taken away.

The Euro-Asian Congress spoke with people in Kolomyia after the first attack who explained that the cemetery itself was from Soviet times virtually destroyed.  The land it was on remains part of the city square, although according to a City Council decision from over 20 years ago, it was supposed to have been designated as territory of a memorial cemetery.  At that time the City Council gave the Kolomyia Orthodox Jewish Community permission to draw up plans for restoring the territory.

It took time to raise money for this, but the Community finally received sufficient money from donors in various countries and set to work.  According to the plan prepared, the cemetery will be well lit, with a lot of trees and with cobblestoned paths replacing the present asphalt. There will be ‘walls of memory’ along the paths, holding fragments of original gravestones.  There are apparently around 1300, in different condition.  During the Soviet period they were used for paving courtyards and streets.

Problems arose when the Community informed the City Council that they would be closing off the cemetery area for two years to carry out the reconstruction.  The City Council asserted that the plans had not been agreed and that the Kolomyia Jewish Community did not have the right to block pedestrian access to a city park.

The Community went ahead and on Sept 17, two days before the first attack, blocked passage, posting a notice saying that this was from the beginning of September 2015 to Oct 1, 2017.  A lot of residents were angered, with the park a popular place for relaxation and the path through it the shortest route home.

There does not seem to have been any attempt to explain the plans in advance, and there were certainly no public hearings which are required in such situations.

The context must be borne in mind, certainly, however the comments from social networks vary from the reasonable to the downright anti-Semitic.  One person argued that there had not been a functioning cemetery in that place for 100 years, and there was no need to now bring gravestones from all over the city.  Another suggested, using a word that can be insulting, that Jews should go to “their” Israel and block what they want there.  Another message was even worse.

A criminal investigation was initiated over the damage to the wrought-iron gate (under Article 194 of the Criminal Code – deliberate destruction of property).  It is not clear what measures have been initiated over the two arson attacks.