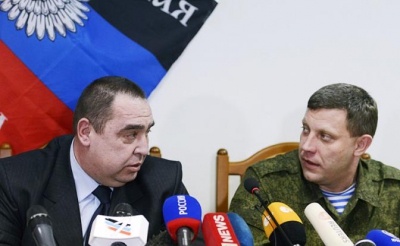 The Kremlin-backed militants in Donbas marked International Day against Fascism and Anti-Semitism on Nov 9 with a round table, and a pathos-filled address from their leader, Oleksandr Zakharchenko.  In ex prompt mode Zakharchenko has been known to refer to Ukraine’s leaders as “pathetic Jews”, but here it was all carefully scripted, with the world called on to unite against an alleged revival of ‘fascism’, and Ukraine’s government said to have been seized by “Nazis”.

In Kyiv, human rights organizations appeared unaware of this Nazi plague, reporting only that there had been 10 cases of racially-motivated violence in the first 10 months of 2015, with 17 people injured.   The NGOs were, however, critical of how the enforcement bodies investigate and react to such cases.

Tetyana Bezruk from the Minority Rights Monitoring Group described the situation as regards anti-Semitism and anti-Semitic vandalism in government-controlled Ukraine as relatively stable.  13 cases of such vandalism have been recorded since the beginning of the year.

She noted, however, that anti-Semitism has become one of the key propaganda messages in areas under the control of Kremlin-backed militants – the so-called ‘Donetsk and Luhansk people’s republics’ [‘DNR’, ‘LNR’].

Anti-Semitism has long been used as a weapon in struggles for power within militant circles, and is standard in the militants’ rhetoric about Ukraine’s leaders.  The press conference in early February when Zakharchenko and the ‘LNR’ leader, Igor Plotnytsky publicly dismissed Ukraine’s leaders as ‘pathetic Jews’  and Plotnytsky’s claim that Euromaidan referred to “Jewish Maidan”, and not, as correctly, “European Maidan” were the most publicized, but not the only demonstrations of primitive anti-Semitism.  It is standard, as in Soviet times, to add the alleged ‘original’ and recognizably Jewish, name to Ukraine’s leaders’ names, often pushing common anti-Semitic stereotypes about the leader in question.

None of this is, of course, mentioned in the ‘republics’’ official rhetoric which speaks of commitment to fighting “neo-fascism” and “turning society’s attention to the ultimate importance of fighting national, ethnic and race hatred”.  There is only the announcement of a roundtable, with no further details, however the OSCE has denied the militants’ claim that an OSCE spokesperson was to be present, and all previous “European activists” whose support for the ‘republic’ have been quoted have virtually always been from far-right and neo-Nazi parties.

The militants’ far-right connections get considerably less attention than the activities of any far-right pro-Ukrainian groups.  In a recent interview, Viacheslav Likhachev, head of the Minority Rights Monitoring Group, was asked why he thinks this is the case.

He explains the focus in the media on far-right groups on the Ukrainian side as due in the first instance to the fact that there is freedom of the press in Ukraine and groups who express concern about such issues.  The attention of international observers is fixed on Ukraine.

“What is the point of criticizing ‘DNR’ for some divisions or other using swastikas on their emblems.  Who do you criticize? ”, Likhachev asks.  He points out that there are no free media in militant-controlled areas, “no international observers who could investigate international crimes like Amnesty International did in Ukraine with regard to Aidar [the volunteer battalion].”

He believes, however, that the Russian far-right on the side of the militants played a more important role than Ukrainian far-right activists. The role of volunteers on the pro-Russian side is considerably greater.  He stresses that the Russian army’s input  at the beginning was in providing specialists, organizers and saboteurs, with by no means all of these being full-time military personnel.  It also intervened at critical moments in the fighting, he says, but most of the Russian fighters, he believes, were volunteers.  It is hard to calculate what percentage of the militants are Russian. He suggests one third, but stresses that these are the professional sabotage and intelligence storming groups and the most motivated.  Of the Russian militants, he believes more than half are radical nationalists.

Russian neo-Nazis played an extremely important mobilizing role at the beginning of the conflict, as the most organized groups who were physically and psychologically inclined to seek a military solution. Likhachev quotes Igor Strelkov (the nom de guerre of Igor Girkin, the perhaps former Russian military intelligence officer) who stated that if his unit had not seized Sloviansk, the situation would have ended up like in Kharkiv and Odesa, with the militants crushed.

If Strelkov’s group espoused “imperialist nationalism”, the group which seized Kramatorsk was made up to a great extent of neo-Nazis.  So too were other sabotage and intelligence groups, like that of Rusich (more on the earlier and later activities of its neo-Nazi sadist leader Alexei Milchakov).  Rusich “was a totally neo-Nazi unit, using swastikas on its emblems” and made up of professional fighters who “had just yesterday been Russian soldiers”.

Likhachev cites a large number of other Russian neo-Nazis fighting for the militants.  He points out that the neo-Nazi Russian National Unity party was one of the first organizations which began sending groups to fight on an organized basis.  According to the Group’s information, Russian National Unity fighters were present in Donetsk, Odesa, and some cities in the Odesa oblast from towards the end of February 2014.  There had in fact been representatives of the party much earlier, however Likhachev calls them ‘sleeping agents’.  As reported, Pavel Gubarev, one of the first militant leaders in Donetsk, was originally linked with Russian National Unity.

The fervour shown by Russian neo-Nazis and other far-right parties has found echoes throughout Europe.  During a recent anti-migrant march in Heidenau, some of the German neo-Nazis carried a ‘DNR’ flag.  It seems that most, if not all, European neo-Nazi and extreme-right parties find no cognitive dissonance in fighting what Moscow and its proxies term ‘Ukrainian fascism’.

International Day against Fascism and Anti-Semitism marks the anniversary of Kristallnacht, the first deadly attacks on Jews in Nazi Germany and Austria on Nov 9-10, 1938.  The Jews and Roma Gipsies murdered over the next 7 years, and our fathers and grandfathers who fought a real evil deserve more than the cynical pretence concocted by Moscow and parroted by its proxies of &#146fighting ‘fascism’.