Crimean Maidan activist tortured into denying he was tortured 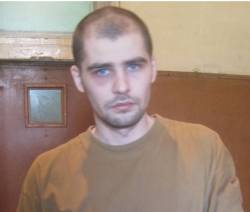 Oleksandr Kostenko, Ukrainian Maidan activist and Russian-held political prisoner has been taken to a prison in the Kirov oblast, in Russia and will not be present at an important court hearing in Simferopol on Friday Nov 13.   The appeal against the refusal to investigate evidence of torture will almost certainly be rejected, but it is needed for the European Court of Human Rights where this case is undoubtedly headed.

Kostenko’s lawyer Dmitry Sotnikov explains that the Crimean military court is to hear his appeal against the rejection by military investigators of his application to investigate alleged injuries inflicted by a number of identified FSB [Russian Security Service] officers on Kostenko during his detention and first interrogation.  At that time the only ‘lawyer’ present was one appointed by the investigators, and a ‘confession’ was obtained from Kostenko, together with a statement that he had been beaten on the street by unidentified individuals.  Kostenko was supposed to have decided there and then, despite a broken arm and numerous injuries requiring medical treatment, to hurtle off to confess to the FSB investigators.

Despite the fact that Kostenko retracted the initial ‘confession’, saying it had been tortured out of him, and the records clearly showing that he had been detained by FSB officers, without a broken arm, bruising, etc, Judge Mozhelyansky from the Kiyevsky District Court in Simferopol decided to take only the original ‘confession’ and first interrogation into account and found Kostenko guilty.

Sotnikov writes that Kostenko’s relatives report that the investigators have put pressure on witnesses of Kostenko’s arrest on Feb 5.  One of the key witnesses, Kostenko’s father Fyodor Kostenko disappeared on March 3 this year after visiting Kyiv in connection with his son’s arrest.

The court has summoned four senior officials from the Russian Investigative Committee who Sotnikov stresses were obliged by law to carry out a proper investigation and initiate criminal proceedings.

If the appeal is rejected, this will mean a new application to the European Court of Human Rights.  It is an application that must win, Sotnikov writes, and he is doubtless correct.  The rights to life, to freedom from torture, to a fair trial, etc. all include the right to a proper investigation of allegations that these rights have been violated.

Kostenko was taken into custody on Feb 5, although a criminal investigation was only initiated on Feb 6,  He was convicted in May on surreal charges pertaining to an alleged and unprovable offence that Russian-occupied Crimea has no jurisdiction over.

Kostenko, the prosecution claimed, and the court accepted, had slightly injured a Crimean Berkut officer on Feb 18, 2014 during the EuroMaidan protests in Kyiv.  This was deemed to fall under Article 115 § 2.b  of the Russian Criminal Code (deliberately causing mild damage to health for motives of political, ideological, racial, ethnic or religious hatred or enmity, or for the same motives in relation to a social group).

This could have only carried a sentence of community work since the prosecution had been unable to claim that the Berkut officer had been a Russian law enforcement officer at the time of the alleged deed, and a second charge was thrown in.  Kostenko was also accused under Article 222 § 1 (unlawfully obtaining, keeping or carrying the main parts of a firearm”).  The investigators claimed to have found a rifle barrel when searching his home.  Kostenko and his lawyer say that the rifle barrel was planted, and certainly none of the safeguards against evidence being planted were applied.

Sotnikov says that not one of the official witnesses of the search has confirmed that weapons were found in Kostenko’s flat.  The officers claim that Kostenko Senior immediately identified the gun barrel as belonging to his son, but there is no record of this, nor of Kostenko’s father having, as the investigators assert, given permission for the search (needed as there was no search warrant).   How the permission was obtained is not clear since the witnesses arrived after it had (allegedly) been given, and Fyodor Kostenko has vanished without trace.

This prosecution is among the most chillingly lawless in Russian-occupied Crimea and Oleksandr Kostenko has been recognized as a political prisoner by the Memorial Human Rights Centre.