Ukraine to answer in Strasbourg for imprisonment of controversial blogger 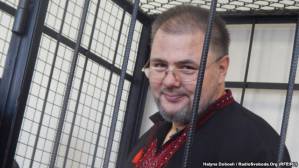 Ivano-Frankivsk blogger Ruslan Kotsaba has been in detention now since February 2015, on charges as contentious as the journalist’s public pronouncements.  His lawyer says that she is preparing an application to the European Court of Human Rights and accuses the authorities of deliberately dragging out the court proceedings.

Kotsaba was arrested on Feb 7 and charged by Ukraine’s Security Service [SBU] with State treason (Article 111 § 1 of Ukraine’s Criminal Code) and under Article 114-1 § 1.  The latter is over espionage, although in this case, he is accused of obstructing the lawful activities of the Armed Forces and other military formations.

In March, Kotsaba’s lawyer Tetyana Montyan published the indictment and, aside from a video address to President Petro Poroshenko from Jan 17, 2015,   the charges appear to be based on his willingness to cooperate with Russian pro-Kremlin media and on his views.  State treason could carry a sentence of 12-15 years imprisonment.

On this video he publicly called on “all adequate people” to refuse mobilization, asserting that it had been  declared in breach of Ukraine’s legislation, since Ukraine has not declared martial law.  He asserted that he “would rather serve a sentence in prison than go to a civil war, to kill or help kill my compatriots who live in the East.  Even if they think differently or believe that the Kyiv government does not deserve their subordination.”

In fact, the video had been watched by an extremely modest number of people until the SBU made its author so famous.  There was certainly no evidence that it had any impact on the level of mobilization, yet the prosecution is claiming that it falls under Article 14 as being ‘subversive activities obstructing the armed forces”.

Montyan spoke with a Radio Svoboda correspondent after the latest court hearing on Nov 13.  She said that what is happening is not a trial, and that a person is simply being held in prison on the pretext that a large number of witnesses need to be questioned.  All of these witnesses, she alleges, say the same thing and nothing that they say concerns the essence of the charges laid against Kotsaba.

“We view this as deliberate dragging out of the trial, a violation of the norms of the European Convention on reasonable timeframes for court examination”.

She adds that Kotsaba’s detention is constantly extended on the grounds that the articles he is charged under allow for no other restraint measure. The defence suggests that the very existence of such a norm in Ukraine’s Criminal Procedure Code is in breach of the European Convention.  The European Court of Human Rights has noted on many occasions that the severity of charges cannot be the sole grounds for detention.  Montyan says that Ukraine must be held answerable for the existence of such a norm and for the fact that Kotsaba has had his detention automatically extended for over nine months.

Only three out of five witnesses had appeared at the hearing on Nov 13.  The previous hearing, more than a month earlier, on Oct 1, had been deferred because there was no convoy.  So far 33 witnesses out of 58 have been questioned, and the next hearing is scheduled for Nov 26.

Very many of us are revolted by Kotsaba’s readiness to collaborate, whether for remuneration or for free, with Russia’s propaganda channels.  There is, however, no law prohibiting this.  Nor is it easy to understand how the prosecution will be able to prove that Kotsaba’s criticism of Ukraine’s mobilization constituted state treason, not expression of his opinion.  The Independent Media Union of Ukraine was swift to voice concern about the dangerous precedent that his detention creates.

And held in detention for many months, not because Kotsaba’s guilt has been proven, but because of the severity of these highly worrying charges.