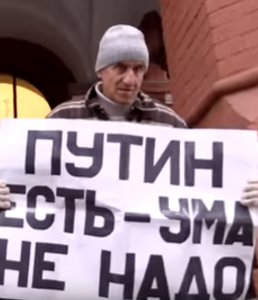 We have Putin, a mind is not needed

The Russian prosecutor has, strictly speaking, asked ‘only’ that 75-year-old civic activist Vladimir Ionov receive a 3-year suspended sentence for his totally peaceful protests.  Over this three-year probation period, however, Ionov would be severely hampered in his movements and prohibited from visiting any place where people meet in large numbers.  He has already stated unequivocally that, if so sentenced, he will “of course’ not comply with the restrictions.

If the court goes along with the prosecutor, and it seldom dares to do otherwise, Russia could soon reach a new low by imprisoning a dignified 75-year-old pensioner as first victim of a draconian law overtly aimed at crushing peaceful protest.

Ionov will deliver his final speech on Dec 8.  During the earlier court debate, he explained  how Russians had gained freedom with Perestroika and the collapse of the Soviet Union, and had begun behaving as fee people do, - incorrectly from the point of view of those in power.  The situation changed, became “nightmarish” when Vladimir Putin came to power.  He recalls Putin’s notoriously vulgar threat to ‘waste terrorists in the latrine’ and says that he had begun protesting then, going on demonstrations and marches.

“When the authorities out of fear or for some other reason banned these marches, I began coming out on single-person pickets which are not banned.  That ended with me finding myself at this event (i.e. trial) where, in honesty, I feel ashamed since so much paper, so many people are distracted.  All of us here, never mind whether we’re citizens or those who about think about their own interests, we’re all residents of this city. And in this city murders are taking place. On Feb 27 the unpunished killing of Boris Nemtsov.  Nor is that the first killing.  No reaction from those in power [he uses the term ‘servants of the people’], though he was a deputy.”

Judge Leonid Garbar interrupted him] telling him to keep “to our matter”.  Ionov wrapped up, repeating his words about being ashamed of what was happening.  He said that the proceedings should be terminated and an apology given for the inconvenience.

Vladimir Ionov is the first of four people so far to be tried under a new article of the Criminal Code which envisages up to 5-year sentences if a court has issued three rulings on administrative offences within 180 days.  It is quite standard in today’s Russia for police to detain people at entirely peaceful protests, with administrative protocols then drawn up and processed by the courts with no questions asked.   Three such unwarranted administrative penalties can now lead to criminal prosecution.

It remains to be seen whether the court really does convict Ionov on such grotesque charges.  Pro-Putin activists have, however, already reached another low.  On Oct 24, members of two pro-Kremlin organizations [NOD and SERB] attacked Ionov while he was holding a single-person picket outside the History Museum in Moscow.  They threatened to do the same to “all those who insult Putin, insult Russia”.

Seconds later Ionov was doused first in green paint, then with some kind of chemical cleaning substance which got into and burned his eye.  No police officers came even close.