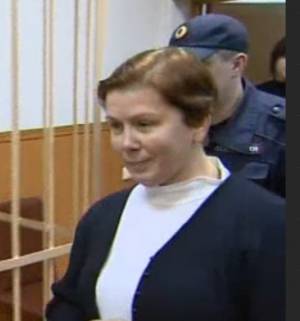 A Moscow court has upheld the house arrest until Dec 27 imposed on Natalya Sharina, Director of the Ukrainian Literature Library in Moscow.  While the renowned Memorial Human Rights Centre has declared Sharina a political prisoner, the pro-Kremlin NTV channel has come out with a 15-minute programme of unadulterated, if deranged, hate speech.

Sharina’s lawyer Ivan Pavlov notes that the 15 minute program, presented by Savva Morozov, still fails to explain what exactly the library director is supposed to be guilty of. “If of circulating extremist books, then the entire staff of the library should be jailed, as well as the whole Moscow Department of Culture as an organized criminal gang.”

The program is entitled “The Bandera Library”, and has at least as much, if not more, about the Ukrainian nationalists Stepan Bandera and Roman Shukhevych, as about Sharina.  In deliberately manipulative mode, the protest expressed over the searches and Sharina’s arrest by human rights groups is mentioned, only to be ‘exposed’ as some kind of conspiracy with dangerous ‘criminals’.  The books which are flashed past the viewer include works about Holodomor [the manmade Famine of 1932/33] and the Ukrainian national movement.  The presenter claims that there were “prohibited books” in abundance, though in fact, the Investigative Committee named only one, a work by Dmytro Korchynsky.  This book, Sharina’s colleagues say, was removed during a previous search in 2011 and never returned.  All are adamant that the book was planted.

For 15 minutes NTV viewers are told horror stories about Bandera, alleged modern-day followers of Bandera in Ukraine, and about the Literature Library as some kind of hotbed of “anti-Russian” Ukrainian iniquity.

Only one book by Korchynsky is on Russia’s substantial list of ‘extremist’ materials, so the Investigative Committee’s mention of ‘books’ is already manipulative.  Books about Holodomor 1932-33 as genocide are indeed on the ‘extremist material’ list, but so too is a pivotal work by Rafael Lemkin, the renowned lawyer most famous for first using the term genocide.  The allegations made by NTV are out and out lies.  The program and prosecution of the Director of the Ukrainian Literature Library suggest that there is no let-up in what Memorial referred to as “the anti-Ukrainian campaign continuing since Spring 2014 in the state-run media and in utterances made by public officials holding high posts in the Russian Federation’s leadership.  One of the parts of this campaign is to initiate criminal cases against citizens publicly expressing a position on what is happening in Ukraine that differs from the official position or in any way linked with Ukraine”