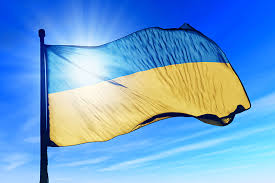 Iryna Kopylova. a pro-Ukrainian activist in Russian-occupied Crimea, is due in court on Dec 15 for having photographed herself with a Ukrainian flag near the monument to Vladimir Lenin on Simferopol’s central square.  Another activist, Veldar Shukurdzhiyev is facing illegal attempts to force him into backdating a police protocol so that he can also be charged.

As reported, back on Aug 11 this year, officers from Russia’s so-called Centre for Countering Extremism found nothing better to do with their time than to carry out an ‘operation’ against two Ukrainians and a Ukrainian flag.  A contingent of five cars swooped on the two activists as they were taking photographs of themselves holding the Ukrainian flag.  They were seized together with Irina Biryukova, a Moscow lawyer.

Administrative offence protocols were issued with the claim being that the Ukrainians had been holding an unauthorized public event  - all two of them.  Biryukova reported at the time that FSB officers had arrived at the police station and tried to convince her that a Ukrainian flag on Lenin Square was illegal.  They refused to allow her to represent the two Ukrainians, however friends managed to find them a lawyer, and eventually all three were released.

Although protocols had been drawn up, with the so-called offence carrying a fine of 10 -20 thousand roubles or community work for up to 40 hours, nothing seems to have been heard in either case for over 3 months.  The optimistic interpretation would be that somebody understood how absurd the charges were, however the real reason seems to be that the police officer Denis Valeyev who drew up Shukurdzhiyev’s protocol made a mistake.

There has been a surge in repressive measures against Crimean Tatars and other Crimeans known for their pro-Ukrainian position, and the August incident was dredged up.

In Kopylova’s case, a court hearing on the administrative charge of infringements of the rules for holding meetings was scheduled for Nov 30.  Kopylova herself asked for it to be postponed, in order to call witnesses.  The Crimean Human Rights Group reports that she is insisting that the official witnesses and police who drew up the protocol are questioned since earlier they were not warned that they faced criminal liability for giving false testimony.  Biryukova points out that the so-called ‘witnesses’ had arrived after the protocol was drawn up, signed it and left.

Shukurdzhiyev has already faced harassment and been threatened with a ban from his homeland, but for the moment is not due in court over the photographed Ukrainian flag.  The reason would be funny if the whole situation were not so worrying.  Shukurdzhiyev has now filed a formal complaint with the prosecutor’s office.  He first points out that photographing oneself is not a crime, and then goes on to explain how he was stopped by police and taken to the central police station where Valeyev drew up Protocol No. 039715.

The same Valeyev turned up three and a half months later, on Nov 28, 2015.  He explained that he had twice submitted the protocol to the court, but had it returned since he had failed to provide an offence justifying the detention.

Shukurdzhiyev writes that “Valeyev said that he had rewritten the Aug 11 protocol and made the necessary changes to convince the court of my guilt and tried to “hand me” the protocol that he had falsified so that I would sign it and he would send it to the court a third time”.  Shukurdzhiyev understandably refused.

On Nov 29, four men in plain clothes turned up at his home. They said that they were from the FSB and demanded that he sign a protocol which he understood to be the falsified one from Aug 11.  They refused to identify themselves, but openly photographed Shukurdzhiyev and his family, and frightened his mother who is unwell and his elderly father.  They demanded that Shukurdzhiyev go with them but, understanding that they would try to force him into signing an illegal protocol, he refused.

He directly accuses Valiyev and his colleagues of abuse of their position and demands that the prosecutor protects him and his family and takes appropriate measures over the falsification of an official document.

The chances of the de facto prosecutor in Russian-occupied Crimea doing this are close to nil, as Shukurdzhiyev, Kopylova and other courageous pro-Ukrainian activists have had all too many occasions to notice over the last 18 months.

Three young people from Kerch were prosecuted back in August after marking Ukraine’s Independence Day by trying to photograph themselves with a Ukrainian flag on Mount Mitridat.  The two guys and a young woman were told at the police station that they’d been detained because of the Ukrainian flag and a T-shirt with the Ukrainian trident and a pro-Ukrainian message.  One young man was even jailed for 15 days for supposed ‘obstruction of public order and bad language’.

See also:  Accused of “provoking the police to use force” by waving a Ukrainian flag