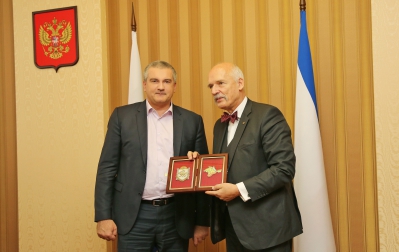 Janusz Korwin-Mikke may be a European Parliament deputy, but if Russia was hoping through his visit to prove international acceptance of its invasion and annexation of Crimea, it should think again.

Korwin-Mikke has gained notoriety outside his native Poland for openly racist language in the European Parliament, for talking of migrants as ‘human trash’ who were, he alleged, flooding Europe and a quite scandalous performance in which he tried to demonstrate his point using the Nazi Sieg Heil greeting.  He was fined for the first two incidents.

None of this appears to bother Russia or the leaders it installed in Crimea and Sergei Aksyonov was quick to hold a meeting and photo session of himself with this real-life MEP.  The reason is easily understood.  Korwin-Mikke is an embarrassment to most Poles for his outrageous utterances, but his Euroscepticism and unwavering support for Russian President Vladimir Putin and all his policies can always be relied on, as can views on Ukraine that exactly coincide with the Kremlin line.

Typically, both he and Polish politician Mateusz Piskorski, who regularly rubber-stamps all of Russia and its proxies’ ‘elections’, visited Syria in December 2014 where they expressed their support for the regime of Bashir Al-Assad.

Neither men expressed any concern over the Assad regime’s appalling human rights record, but both endorsed a new Moscow-launched project in July this year in support of so-called political prisoners in Ukraine.

With this latest trip, Korwin-Mikke has breached Ukrainian law by travelling to Crimea via Moscow.   In fact, the entire visit is flouting Poland’s position on Russian-occupied Crimea, and that clearly articulated in the UN General Assembly’s Resolution from March 27, 2014.  The MEP states clearly that he is there at the invitation of the “official authorities” in Crimea who are not recognized by Ukraine, Poland nor the European Parliament which Korwin-Mikke is supposed to be representing.

Korwin-Mikke’s blog entry must certainly make pleasant reading to those in the Kremlin.   He compares Russian newspapers with those in Poland, and implies that it is the latter that are biased.  At Sheremetyevo Airport in Moscow, he notes at the end, “the people are the same as in all Europe, only Arabs and Niggers are somehow not to be seen, and there’s far less of a crowd.  More and more Russian TV channels are asking me for interviews. It will be good!”

Russia and its proxies’ invitation list has raised eyebrows since the pseudo-referendum aimed at whitewashing Russia’s annexation of Crimea on March 16, 2014.  Piskorski then led a team of ‘international monitors’ of the Crimean ‘referendum’, most of whom are from far-right or neo-Stalinist parties in Europe and beyond.

In August this year, Márton Gyöngyösi, Hungarian MP from the far-right Jobbik party, notorious for its anti-Semitic, anti-Roma and homophobic views, announced that members of his party had already received an invitation “from the Russian side” to visit Russian-occupied Crimea.  He told Sputnik that members of the Jobbik party “considered to represent the party at the highest level” had been invited.

In February, Aksyonov laid on a similar propaganda stunt for a delegation from Bulgaria’s extreme right Ataka party.  They promptly obliged by affirming their “recognition and support for Crimea as part of the Russian Federation”.

Despite the mutually supportive relations cultivated between the Kremlin and the far-right French National Front leader Marine Le Pen, Russia is not at all averse to welcoming French politicians from other parties to Crimea (see: The High Price of French Collaboration).

All that is needed is unflinching support for the current regime in Russia, its policies, including, though not only on Crimea and the EU, as well, of course, as its international buddies, like Syria’s Assad.