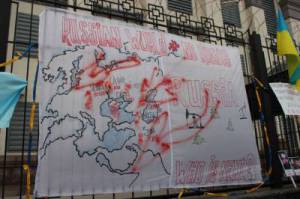 RUSSIAN WORLD - NO RIGHTS,  WHO IS NEXT?  Protest outside Russian Embassy in Kyiv on Human Rights Day (Dec 10)

Ukraine’s leaders are continuing to drag their feet on formally recognizing the jurisdiction of the International Criminal Court [ICC] in the Hague.  Constitutional amendments tabled in parliament by President Petro Poroshenko finally enable ratification, yet bafflingly delay this by a further three years from when the law is published.

This is one of several significant failings pointed out by human rights activists in the proposed amendments to Ukraine’s Constitution regarding the justice system. The Human Rights Agenda, an initiative uniting various human rights organizations, has set out specific concerns regarding the constitutional amendments proposed, with the issue of jurisdiction of international courts in first place.

The law proposes addition of the following sentence as paragraph 6 of Article 124 of the Constitution : « Ukraine can recognize the jurisdiction of the International Criminal Court according to the conditions set out by the Rome Statute of the ICC”.

This simple sentence is all that is need to remove current obstacles to ratification, and according to one of the activists Oleksandra Matviychuk, politicians have already boasted about this supposed new step towards compliance with the EU-Ukraine Association Agreement.  They do not mention the planned delay which places compliance in question.  The hitch is in the Final and Transitional Provisions which state that the law comes into force three months after its publication except paragraph six of Article 124 which takes force only three years after publication.

The Human Rights Agenda points out that such a delay is totally unjustified, especially given that the ICC has already begun a preliminary investigation of the situation since Feb 20, 2014.

As reported, on September 8 this year Ukraine lodged a formal submission to the International Criminal Court accepting the Court’s jurisdiction to investigate possible war crimes committed since Russia’s invasion and annexation of Crimea and the military conflict in Donbas.  Article 12(3) of the Rome Statute enables a State not party to the Statute to accept the exercise of jurisdiction of the Court.

In an article for Dzherkalo Tyzhnya, Matviychuk calls the proposed 3-year delay extraordinary and wonders whether Ukraine’s government is hoping to retain the option of revoking it’s declarations and stopping the investigation.  If so, she warns, this retrograde step, worthy only of an undemocratic regime, would block all doors to the EU.

The human rights activists point out that there are other possibilities for international justice which the draft amendments have failed to include.  The UN Security Council, for example, recently considered creating an international tribunal over the downing of the Malaysian airliner MH17 over Kremlin-backed militant-controlled territory in Donbas.   Those moves were supported by Ukraine and other countries, but blocked by Russia.  The Human Rights Agenda warns that if the Constitution only mentions ICC, that Ukraine will have problems recognizing the jurisdiction of such international tribunals.  It therefore proposes a broader scope, with the wording as follows:

At present the constitutional amendments proposed will preclude the involvement on special courts of any person who is not a Ukrainian national.  The human rights initiative stresses that the amendments should stipulate that this is “except for cases envisaged by international agreements which Ukraine’s Verkhovna Rada has recognized as binding”.

That will make it possible to create special international courts including judges from other countries.

What are politicians afraid of?

There have been suggestions that Ukraine does not want to ratify the Rome Statute fearing counter claims from Russia of supposed Ukrainian war crimes in Donbas.

If this is the case, Ukrainian legislators are seriously underestimating the international judges.

Russia’s Investigative Committee was recently forced to drop its charges of ‘war crimes’ against Ukrainian Serhiy Litvinov after it was proven that the people he was alleged to have murdered, raped, etc. were figments of the investigators’ imagination.  Litvinov was unfortunate enough to cross the border into Russia because of an acute tooth inflammation and was seized, tortured and remains in detention 18 months later (see: Russia forced to withdraw insane charges against Ukrainian hostage)

The renowned Memorial Human Rights Centre has subjected the charges made by Russian investigators against two Ukrainians of war crimes in Chechnya to similar scrutiny and placed in question the alleged crimes and the methods used here also to obtain ‘confessions’   Alexandr Bastrykin, head of the same Investigative Committee has come out with extraordinary allegations about Ukrainian Prime Minister Arseny Yatsenyuk on the basis of the ‘testimony’ tortured out of these men.

He has also asserted Russia’s supposed ‘universal jurisdiction’ which seriously clashes with the Russian parliament’s recent decision allowing Russia to flout the rulings of international courts.

With respect to ‘witness’ testimony, the use made by Russian propaganda channels of actors, a supposed Sloviansk resident describing the alleged ‘crucifixion’ of the 3-year-old son of a militant on a non-existent square, and numerous other lies make it difficult to believe that Russia really has accumulated credible evidence.

Unlike Russia, Ukraine is not denying Ukraine’s obligations under international law.  Its leaders, however, would gain credibility if they stopped offering half-measures as though they had something to fear.