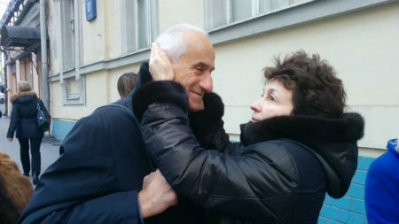 Vladimir Ionov, the 76-year-old whose verdict on charges under Russia’s new draconian anti-protest laws was delayed after he was hospitalized with severe chest pains, has arrived in Ukraine where he plans to seek political asylum.  Ionov has been on trial facing the same charges as those used to sentence Ildar Dadin to 3 years imprisonment.  The new law has been condemned both in Russia and abroad as aimed at crushing peaceful and entirely constitutional protest altogether.

The independent website Grani.ru reports that Ionov contacted them on Monday and explained that he had crossed into Ukraine illegally since he does not have a passport, and that he is planning to formalize his situation as soon as possible. He told the journalists that he decided on this move because of changes in his personal life, and his new partner Olga Braun.

Olga Braun, who is also a Muscovite, had left for Ukraine earlier.

Ionov believes that he has not left for ever and that there will soon be serious changes in his native Russia.  “Please God that the changes take place without bloodshed”.

The prosecutor on Nov 25 had asked for a 3-year suspended sentence for Ionov’s peaceful pickets.  Since Ionov stated immediately that he had no intention of complying with unconstitutional restrictions, there would have been a very real likelihood of his imprisonment.  In fact, in Dadin’s case, the court (under judge Natalya Dudar) handed down a three year real sentence, when the prosecutor had ‘only’ asked for two years, so there was indeed no knowing what awaited Vladimir Ionov at the hearing rescheduled for 23 December.

Russia has demonstrated that age is no obstacle when passing repressive sentences.  73-year-old Ukrainian Yury Soloshenko, who has a heart condition, was on Dec 10 sent to a maximum security prison somewhere in Russia.  His case is one of at least 11 where Ukrainians have been arrested and tried on absurd charges.  In Soloshenko’s case he was convicted in a totally secret ‘trial’ with a state-appointed lawyer of spying, although he is long retired, and had never had access to state secrets.

During the earlier court debate, Ionov explained how the situation had become “nightmarish” after Vladimir Putin came to power.  He recalled Putin’s notoriously vulgar threat to ‘waste terrorists in the latrine’ and said that he had begun protesting then, going on demonstrations and marches.  Then the authorities got worried, and banned such marches, and he began coming out on single-person pickets which are not banned.

Ionov has been charged with four episodes: a single-person picket on Jan 10 with a placard: “Je suis Charlie” [this was just after the massacre at Charlie Hebdo in Paris]; taking part in gatherings on Jan 15 and on March 21, as well as participation in a picket in support of Nadiya Savchenko on May 11 (the imprisoned Ukrainian MP’s birthday).

Three activists were arrested in January this year under the new anti-protest law, Ionov and Mark Galperin on Jan 16, and then on Jan 30 Dadin, who was placed under house arrest.   The Memorial Human Rights Centre declared Dadin a political prisoner back then, and there has been international condemnation of his sentence.