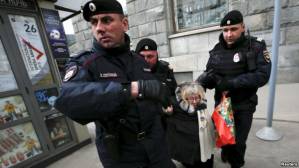 Russian police detain a protester against Russian President Vladimir Putin after she took part in a lone picket in central Moscow in April.

A group of prominent Russian dissidents has identified what it says are Russia’s 10 most harmful laws. Their project, "Sanatsia Prava, " or Sanitation Of The Law, calls for the abolition of legislation that they say causes extensive harm to Russian society.

This controversial law, which came into force in November 2012 on the backdrop of mass opposition protests, requires nongovernmental organizations to register as "foreign agents" with the Justice Ministry if they receive foreign funding and are deemed to engage in "political activity."

Failure to comply is punishable by fines of up to $4, 215 and prison terms of up to two years.

The law has led to the closures of more than 20 NGOs so far, many of which chose to cease their activities rather than be labeled "foreign agents" -- a term associated with the word "spy" in Russian.

A nonprofit group supporting independent media and headed by Boris Zimin, a member of Sanatsia Prava, was one of the NGOs blacklisted as a "foreign agent." The Dynasty Foundation headed by Zimin’s father, telecommunications magnate Dmitry Zimin, shut its doors this year after being slapped with the label. The foundation provided grants to young scientists, and its closure caused dismay in Russia’s cash-strapped scientific community.

Sanatsia Prava says the vague definition of what constitutes political activities "allows law enforcers to interpret almost any public activity by an NGO as political."

The law, it says, "significantly restricts the rights of citizens to unite and engage in civic activities" and violates both the Russian Constitution and the European Convention on Human Rights, to which Russia is a contracting party based on its membership in the Council of Europe.

One of the most divisive laws adopted by Russia in recent years, this 2012 legislation bars U.S. citizens from adopting Russian orphans.

It is named after Dmitry Yakovlev, a Russian-born toddler who died of heatstroke in the United States in 2008 after his adoptive father left him in a parked car for nine hours. A U.S. court ruled the death an accident.

The Dima Yakovlev law effectively blocked the departure of about 200 Russian orphans who had already been told they would soon go home to their adoptive families in the United States.

Many of those children have severe diseases and disabilities.

Sanatsia Prava says the law was passed "with numerous procedural irregularities" and violates the Russian Constitution, the Russian Family Code, and the UN Convention on the Rights of the Child.

The ban, it adds, "runs counter to common sense and universal ideas of justice, when orphaned children become bargaining chips in foreign-policy games and are deprived of the chance to acquire a full-fledged family."

Under this legislation, signed by Russian President Vladimir Putin in May, authorities can shut down "undesirable" NGOs without a court order if the prosecutor-general determines that they threaten national security.

The measure is widely seen as part of a deepening crackdown on democracy and human rights advocates in Russia.

In July, the Washington-based National Endowment for Democracy (NED) became the first NGO to be banned under the law.

The Prosecutor-General’s Office said NED, whose stated goal is "the growth and the strengthening of democratic institutions around the world, " posed "a threat to the constitutional order of the Russian Federation and the defensive capability and security of the government."

Sanatsia Prava says the law "significantly complicates the activities of NGOs and hurts the development of Russian civil society."

Officially intended to protect the religious beliefs and feelings of Russian citizens, this amendment to Russia’s Criminal Code was drafted shortly after the punk dissident collective Pussy Riot staged an anti-Kremlin performance at Moscow’s largest cathedral in March 2012. The three activists were later jailed on hooliganism charges.

Under the law, "public activities expressing clear disrespect to society and carried out with the aim of insulting the religious feelings of believers" are punishable by fines of up to $4, 215, up to 200 hours of community service, or up to three years in prison.

Sanatsia Prava says the legislation contradicts the principle of a secular state and violates the rights of Russian citizens to free speech and freedom of conscience.

So far, it has targeted mostly art and media, with a number of Internet pages blocked under the law.

In one of the most high-profile cases to date, a Russian Orthodox cleric filed a lawsuit against Boris Mezdrich, the head of the Novosibirsk State Opera, on the grounds that its production of Richard Wagner’s 19th-century opera Tannhauser contained scenes allegedly offensive to Christians. Thousands of conservative activists protested against the production outside the opera house.

Although a court closed the case, the Culture Ministry fired Mezdrich for ignoring "the values prevalent in society" and showing "contempt for the opinion of citizens."

Sanatsia Prava says the law "is being actively used to introduce censorship on the Internet and in mass media, and also serves as lever to pressure the artistic community."

Sanatsia Prava calls for the full removal of the embargo slapped by Russia on a range of Western food imports in August 2014 and the trade sanctions introduced against Turkey last month.

"The food embargo has an uneven and generally limited negative effect on the economy of the countries against which it is introduced, " the group says on its website. "On the other hand, it causes more significant harm to Russia’s economy and citizens."

It says the sanctions constitute a breach of Russia’s obligations to the World Trade Organization, which it joined as a full member in 2012.

This December 2013 law allows the authorities to block websites deemed to feature content inciting mass riots or extremism without a court ruling. The law puts Roskomnadzor, Russia’s state agency for media oversight, in charge of maintaining a blacklist of banned sites and making sure that Russian Internet providers block access accordingly.

Russia has since blocked three major opposition news websites -- EJ.ru, Kasparov.ru, and Grani.ru -- that all sharply criticized the Kremlin’s policies, including the occupation of Crimea by Russian troops that led to the Ukrainian peninsula’s annexation in 2014.

Sanatsia Prava says the law violates freedom of speech, freedom of assembly, and "is actively used to combat manifestations of dissent under the pretense of fighting extremism."

This contentious law, passed by the State Duma in June 2013, criminalized the "propaganda of nontraditional sexual relations" to minors.

Lawmaker Yelena Mizulina, the law’s co-author, has said its aim is to protect Russian children from information that contradicts "traditional family values."

Although the authorities have fined only a handful of people under the law so far, rights advocates say the legislation has encouraged antigay discrimination and has coincided with a spike in violence against sexual minorities.

Drafted during the pro-democracy Maidan protests in the Ukrainian capital, this law was signed by Putin in July 2012. It prohibits "holding meetings, rallies, demonstrations, marches and pickets" multiple times during a six-month period.

Penalties range from hefty fines to a maximum of five years of prison or forced labor.

The first person to be sentenced under the law was Ildar Dadin, who was ordered to spend three years in jail by a Moscow court earlier this month.

Three more people have been barred from leaving the country for breaching the new rules, including Vladimir Ionov, a 76-year-old pensioner who wasdetained in January for holding up a sign saying "Je suis Charlie" close to the Kremlin.

Ionov fled to Ukraine earlier this month and plans to seek political asylumthere.

Sanatsia Prava says the law not only violates the rights of Russian citizens to free speech but "effectively criminalizes this right."

The legislation provides harsh financial penalties of up to $70, 240 for public statements deemed libelous and includes a special article on libel against judges, jurors, prosecutors, or law enforcement officials.

The legislation has been criticized as move to silence Kremlin critics and deter whistle-blowers.

This 2014 law, which changes the way the Russian parliament is elected, has been criticized for unfairly bolstering the ruling United Russia party. The party’s reputation was damaged by fraud allegations during the 2011 election.

Under the new law, half of the 450 seats in the State Duma, the lower house of parliament, are now filled by voters choosing individual candidates in districts rather than through the party-list system, seen as less advantageous for United Russia.

Sanatsia Prava says the new system limits access of independent or candidates or candidates from small parties to the State Duma and allows authorities to "eliminate undesirable candidates."

According to the group, the new law was actively used during the February national elections and led to the sidelining of opposition candidates in a many regions.