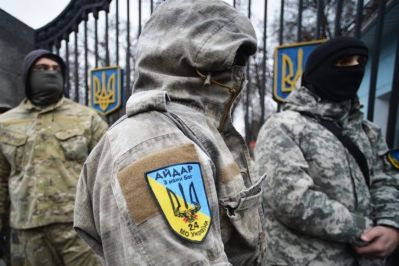 Ukrainians living near Kalanchak, one of the border crossings between mainland Ukraine and Crimea, have demanded action from the Ukrainian authorities over criminal activities by men wearing balaclava camouflage gear with emblems from the Aidar Battalion.  Residents accuse these men, whoever they may in fact be, of abducting people, armed robbery, theft and general intimidation, and link the increase in crimes with the beginning of the Crimea Blockade on Sept 20.  This was initiated by Crimean Tatar leaders, but was joined from the outset by activists from, for example,  Right Sector and the Azov Battalion with the latter’s involvement having already aroused concern from human rights activists.

The accusations this time are of serious criminal activities and any link with the Blockade must be fully investigated.  Civic activists, like Ludmila Sokolenko, for example, have expressed concern over the suspicious speed with which Igor Plotnytsky, leader of the so-called ‘Luhansk people’s republic’ reacted to protest over the criminal behaviour by issuing an ominou 'Appeal to Kherson oblast residents' he believes that provocateurs may be at play in an attempt to bring about the same seizure of power as in Donbas.  Plotnytsky writes that people in his ‘republic’ are following “with anxiety and sympathy” how people in the Kherson oblast are “suffering from robberies and banditry by punitive battalions and former Crimean Tatar, now Kherson-Turkish fighters, under the control of Kyiv”.  He then goes on to claim that this is reminiscent of events in Donbas in Spring 2014 when, in the Kremlin-backed militant’s rendition, “residents of Donbas came out on peaceful demonstrations to seek observance of their constitutional rights”.    He hails the “future Kherson people’s republic”, and promises that if asked, they “will definitely work out how to help you”.

The Russian media has been equally eager to report chaos and lawlessness in the area, though embellishing their story with other anti-Crimean Tatar elements.  The Russian state-owned RIA Novosti Ukrainian service reports that “Crimean Tatars already want to settle their fellow Crimean Tatars in the Kherson oblast and create a Tatar republic with Turkish money... and also create a Muslim battalion”.

Quoting anonymous ‘self-defence representatives’, the Russian agency claims that “the majority of these so-called Aidar fighters are of Tatar appearance”, and mentions the “suspicion” that they might in fact be linked not to Ukraine’s Interior Ministry, but to “an Islamic radical wing”.    The de facto authorities in Crimea began pushing the line that Crimean Tatar leaders were recruiting for the so-called ‘Islamic State’ soon after the blockade began.  You would need to have been long fed on propaganda to believe such preposterous lies about Crimean Tatar leaders of the calibre of Mustafa Dzhemiliev,   but many Russians and Crimean under occupation, unfortunately, have.  Russia had attempted similar propaganda about fictitious ‘Muslim radicalism’ among Crimean Tatars a year earlier.

Whoever is behind the propaganda used, and whoever the men in camouflage are, they are posing a real problem for people in the area.  Plotnytsky’s appeal came on Dec 26, the day after a public gathering in Kalanchak, attended by around 500 residents, as well as representatives of the police and local administration.  A decision was taken at that meeting to create a local self-defence unit to protect people against the above-mentioned bandits.  Oleksandr Anokhin, deputy head of the Kherson regional national police, reported that the unit would be made up of local residents, including veterans of the war in Afghanistan (in Soviet times); fighters who have been involved in the military actions [the so-called ‘anti-terrorist operation’ or ATO] in Donbas and hunters.  Anokin promised that they would be patrolling the streets, together with police officers.

Interestingly, even RIA Novosti did not conceal the scepticism expressed by many of those interviewed with respect to whether the bandits have anything at all to do with the Aidar Battalion.  At a meeting of the regional council on Dec 23, deputy Yevhen Krinitsky asserted that men wearing Aidar emblems had appeared from the first days of the Blockade and engaged in criminal activities.  He does not, however, believe that the men have any connection with the battalion.

RIA Novosti also reports Anokin’s words about the bandits.  He explains that there is a heavy turnaround of people manning the blockade, and it’s simply impossible to keep track of who is there, especially since many activists go by nicknames.  They are currently investigating the crimes and have so far identified one suspect.

Andzhela Slobodyan from the authoritative Kherson newspaper Vhoru has spoken with local residents who, she writes, complain of abductions, armed robberies, burglaries and intimidation.

Valentina Plotnikova is the owner of a bar in Kalanchak.  She has had to replace all the chairs and tables after what a brawl involving shooting escalated into a prolonged conflict between local residents and the newcomers.  The trouble for her and her husband began after she posted CCTV footage of the fight on the Internet.  She stresses that the men have Aidar emblems on their clothes, but who they are in fact she does not know.  They went for her husband after he tried to defend her, and broke his jaw.  “They attacked me, they blocked my path, but I thought to photograph their car number so that I’d have proof.  These people pulled out a machine gun and ran after me into the district police station.  There, however strange it may sound, I was helped by women officers who hid me in their office, because the men were simply afraid”.

There are other tales, such as that of Mykola Padurets, a tractor driver who had his face smashed up and ribs broken, before being shoved into a car boot.  The pretext, he says, was his jacket in camouflage colours which they claimed he didn’t have the right to wear.  They threatened to kill him if he told people what had happened, but he did, nonetheless, lodge a complaint with the police.

Afghanistan veteran Volodymyr Zaklepny says that he was forced to grab a rifle against the bandits who were trying to break into his home, had beaten his son and tried to set fire to a motorbike in the courtyard.

The local residents say that they know who the culprits are, that they spend the day at the blockade and then go out at night on robberies, stealing cars, breaking into properties, etc.  The residents assert that they have turned to the police several times, and had no reaction, although, they assert, the police know the names of those responsible.

Some of the actions of these criminals are life-threatening.  Boris Kushnir, a doctor from the Kalanchak District Hospital told Vhoru that “Members of the Aidar Patriotic Club are engaged in lawless acts, and go around even during the day with guns.  He says that a young man was brought into the hospital with serious injuries, including a stomach wound.  He was operated on and is now recuperating in an Odesa hospital.

Andriy Tretyak, the head of the Kalanchak police, gave different information to that presented by Anokin.  He says that they do know who Is responsible for the attacks, but claims that they need serious proof and can’t detain them.  The men call themselves Aidar Battalion veterans but don’t have any documents to prove their affiliation with any battalion, etc.

Andzhela Slobodyan reports that the Kalanchak residents were supported by neighbours from Chonhar, one of the other two places where the blockade has been underway.  They decided to call on the President to intervene and expressed concern over the creation of a so-called Crimean army.  Valery Koblyuk, deputy from the Chonhar Village Council, said that 30 armed men had been detained by the Ukrainian soldiers.  The armed men claimed to be fighters from a Crimean Liberation Army, and had all kinds of weapons on them. Most disturbingly, Koblyuk says that the soldiers reported that after detaining the men, and removing their weapons, they received orders from command to release them and hand the guns back.

As mentioned, this is not the first time that blockade participants have been accused of illegal activities and infringing people’s rights.  The blockade at the beginning proclaimed legitimate human rights demands, including the release of Crimean political prisoners.  It was supposed to block only trucks carrying goods into Crimea under the highly controversial Ukrainian law on making Crimea a so-called free economic zone.

This soon proved to not be the case with activists from Right Sector, the Azov Battalion and others often demanding to search private cars and confiscating food items which were clearly intended for personal consumption.  Serious concerns about illegal activities emerged with weeks with a report from the Crimean Human Rights Group finding multiple infringements.  The activists found, for example, that people armed with weapons, including firearms, who identified themselves as members of Right Sector had organized their own roadblock not far from the border crossing.  As well as Right Sector, they saw people with the insignia of the Azov, Donbas and other volunteer battalions.   The activists were also told that the Right Sector had been holding two men for a couple of days, but were not allowed to talk to them (more details here: Armed Right Sector & Azov fighters are discrediting Crimea Blockade).  Such reports continued, and it was noted at the Dec 25 meeting that the promise to not search cars trying to cross into Crimea from Chonhar had not been kept.

There have also been widely varying reports about apparent plans for a Crimean Tatar Battalion.  Lenur Islamov, the businessman who has coordinated the blockade, announced on Dec 20, 2015, that a Crimean Tatar battalion was to be formed, with this becoming part of the Ukrainian Armed Forces.

What else he said depends largely on who you read.  Pro-Kremlin media came up with versions similar to that presented by Plotnytsky, with all kinds of aid allegedly being provided by Turkey.  Since Turkey was recently found to have outstripped even Ukraine as target of Russian media hate speech, such information should probably be treated with caution.

It is obvious that criminal behaviour by any participants in the blockade will inevitably  turn Crimeans away from Ukraine and arouse distrust on both sides of the administrative border between mainland Ukraine and Crimea. The men in camouflage and balaclavas who are terrorising Kherson oblast residents clearly need to be identified and stopped.  Failure to do so raises serious and disturbing questions and help only those with an interest in destabilizing Ukraine.