How can Ukraine claim it’s safe to send opposition activists back to Russia? 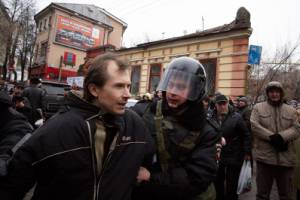 Alexei Vetrov at a march in Nizhny Novgorod on Nov 4, 2012 Photo: A. Tsverova

Alexei Vetrov is one of a number of Russians who have sought asylum in Ukraine after taking part in opposition protests in Russia, and been turned down.  If the final appeal stages fail, he could be sent back. Incredibly, given the ongoing imprisonment of Nadiya Savchenko, Oleg Sentsov, Oleksandr Kolchenko and other Ukrainians, as well as long sentences passed on Russians for peaceful protest, the migration service is still claiming that Russia is a democratic country to which activists can be returned.

36-year-old Vetrov explained in an interview back in September 2015 that he wants to live in a country that aspires to democracy.  He became involved in active protest in 2011 and explains that he first understood that he needed to leave after being a detained twice in one day at actions in defence of the Bolonaya Square political prisoners (arrested and many jailed over the protest on May 6, 2012 after Vladimir Putin became President for the third time).  It was Feb 22, the day that Ukrainians awoke to learn that Viktor Yanukovych and his cronies had fled.

There were two reasons, he says, why Ukraine came to mind.  One was strictly practical – he didn’t have a passport, but the other was Maidan and the events of those months which he had followed from the start.  He was impressed by a country that had won in the struggle against the regime and that seemed determined to follow a democratic path.

He reached Ukraine via Belarus on May 18, 2014, and was allowed into the country because he had a letter from a friend offering to put him up.  This would not have been needed earlier but during those months in 2014, the situation was particularly fraught with large numbers of so-called ‘tourists’ arriving from Russia to take part in the violent seizures of power in parts of Donbas.

Vetrov told Yekaterina Sergatskova writing for Ukrainska Pravda that he had earlier had a successful business selling electronic devices and mobile telephones in Nizhny Novgorod.  In 2010 the new mayor became a local ‘Mafioso’, referred to as the local Kadyrov (after the leader of Chechnya, with his business basically being plundered, with profits rake off by the local police, the prosecutor and mafia.  It was this, he told Sergatskova, that made him understand that a regime which can’t protect business people who create jobs and pay taxes needs to change.  He first just took part in opposition protests, then helped organize them.  The protests in Nizhny Novgorod were in parallel with those in Moscow and St Petersburg and brought several thousand people on to the streets.

It also led to numerous detentions with administrative protocols drawn up, court hearings, even being jailed for 15 days.  Vetrov says that he was detained virtually at every protest, especially after the protests died down and smaller numbers of activists could be closely observed by the FSB.

It was while detained after a demonstration in Moscow that he learned he’d been put on the wanted list back in Nizhny Novgorod.

Even without such ominous signs that he faces prosecution, there is now a real danger of criminal charges being laid for peaceful protest.  As reported, the recently added Article 212.1 of Russia’s Criminal Code allows for criminal prosecution if a person has faced 3 administrative penalties in 6 months.  The amendment has been widely condemned as aimed at crushing peaceful protest and therefore unconstitutional.  It has already been applied against Ildar Dadin who was sentenced on Dec 7, 2015 to 3 years imprisonment for fictitious infringements at peaceful protests and pickets.

Sergatskova writes that 192 Russian nationals have applied for asylum over the last year and a half.  Only six people were granted refugee status in 2015.  This is despite the plans announced by President Petro Poroshenko on April 15, 2015, to simplify procedure for Russian nationals, especially those facing persecution at home, to receive Ukrainian citizenship.

Maxim Butkevych from the Without Borders initiative says that under Yanukovych there was simply silence about any political asylum since Russia was treated like big brother.  Now the authorities say one thing, but behave quite differently with it being a lottery who receives asylum.

In fact, it was sometimes much worse, as with the forced deportation of Magomet Nagiyev, a mandate refugee, and the abduction from Ukraine while he was applying for asylum of left-wing activist Leonid Razvozzhaev.  The latter was imprisoned in Russia on obviously trumped up charges linked with the Bolotnaya Square protests.

The imprisonment on Razvozzhaev, and the mounting persecution of opposition activists make it abundantly clear what kind of danger activists face if forced back to Russia.

Three of the other people Sergatskova mentions as at risk have all been written about here and many times.

76-year-old Vladimir Ionov was about to be sentenced on the same anti-protest charges as Ildar Dadin when he decided to leave for Ukraine.

Pyotr Lyubchenkov is one of the civic activists who tried to hold a peaceful march in support of greater federalization for Kuban last September.  Despite the fact that another of the activists Darya Polyudova was recently sentenced to 2 years imprisonment after her initial arrest over the planned march and inclusion on Russia’s Federal List of Terrorists and Extremists, he is also in danger of being sent back to Russia.

Pavel Shekhtman is a well-known rights activist the Russian political activist who fled to Ukraine in recent days, has been added to Russia’s highly specific ‘register of terrorists and extremists’.  The list includes world-renowned Ukrainian film director and Russian political prisoner Oleg Sentsov and Crimean civic activist Oleksandr Kolchenko, but not Russian fascist ideologue Alexander Dugin whose call to “kill all Ukrainians” was more public and no less extreme than the Facebook comment made by Shekhtman.

Shekhtman is a well-known rights activist who has taken part in numerous protests in support of Russian political prisoners, etc.   He fled to Ukraine in January 2015 and is also being refused asylum.

Ukraine has an extremely spotty record with respect to refugees’ rights, yet has indeed chosen a different path from Putin’s Russia and should demonstrate this by understanding that it is unacceptable to not provide asylum for people facing persecution for peaceful opposition activities in their own country.