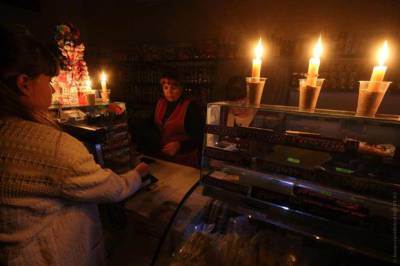 Russian-occupied Crimea is without Ukrainian electricity and is likely to remain so until Russia’s occupation ends.  It will also not receive goods from mainland Ukraine, and probably not water either. Attempts by Crimea’s parliament to call this “genocide’ and demand urgent consideration of the issue by the UN Security Council run up against insurmountable problems, and not only Russia’s internationally condemned annexation of Crimea.  Despite the Kremlin’s attempts to claim that Crimea was always Russian, the peninsula is heavily dependent on mainland Ukraine’s electricity, water and other infrastructure.  It is also not Ukraine that refused to provide Crimea with electricity, but Russia’s President Vladimir Putin.

Although a civic energy blockade began in late November, the electricity cables were repaired and it remained an open question whether an agreement on providing Crimea with electricity from Jan 1, 2015 would be signed.

Ukraine offered a contract which called Crimea Ukrainian territory temporarily under Russian occupation.  This was clearly not to Moscow’s liking, but it is true and in full accordance with the UN General Assembly’s Resolution from March 27, 2014 on the Territorial Integrity of Ukraine.  That resolution calls on States, international organizations, etc. to not recognize any change in the status of Crimea and Sevastopol, “and to refrain from actions or dealings that might be interpreted as such”.

It would be difficult to imagine a more absurd breach of this resolution and international law than for Ukraine to sign a contract calling Crimea anything other than under Russian occupation.

Putin, however, ordered on New Year’s Eve that Crimeans’ opinion should be asked.   He had tried this stunt once before, with the so-called ‘referendum’ on March 16, which has been used in Russia’s narrative ever since to try to justify annexation.

That event was organized within 10 days, with no real choice offered and European ‘observers’ invited from various fascist, neo-Nazi or neo-Stalinist parties with a strong pro-Russian position.  All of them declared it a model of democratic choice and claimed to not notice the soldiers and paramilitaries everywhere with machine guns.  This was in contrast not only to international bodies, but also to a report from the President’s Human Rights Council which, perhaps inadvertently, revealed very different results.

This time, the state-owned Russian Public Opinion Research Centre [WCIOM] was entrusted with the task of ‘finding out Crimeans’ opinions’.  Why it was this body can be easily understood by glancing at the WCIOM website.  A day later, it was reported that 93.1% of Crimeans had expressed opposition to signing a contract stating that Crimea is part of Ukraine, with only 6.2% willing for it to be signed under those conditions.

Crimeans had apparently been asked if they were willing to endure “temporary difficulties linked with minor disruptions to electricity supplies over 3-4 months”.   The situation is almost certainly not temporary, and the problems not minor.

News of the ’survey’ and its alleged results were met with considerable scepticism on social networks.  A Short History of Crimea posted on the Internet on Jan 3, 2016 takes just 10 seconds and requires no translation

Crimean Tatar leader and Ukrainian MP Mustafa Dzhemiliev points out that the occupation authorities in Crimea tried to claim from the outset that the peninsula doesn’t need electricity from mainland Ukraine, that any blockade was good since they would now be fully independent.  They also asserted that the blockade had united Crimeans.

Dzhemiliev was responding to the Crimean parliament’s Statement of Jan 13, 2016 “On preventing the crime of genocide against the Republic of Crimea and punishment for it”.

This expresses “serious concern at the increasing activity of terrorist groups and the danger of the growing number of crimes closely linked with terrorism on territory adjoining the border crossings at Kalanchak, Chaplinka and Chonhar”

The blockade, it claims, “is a vivid example of the flagrant violation of human rights, hate-related crimes and genocide which are causing damage to the civilian population of Crimea”.

It goes on to claim that a series of unprecedented terrorists acts “sends a challenge to the fundamental pillars of human civilization and the entire world community in fighting terrorism”.

One purported example is provided, namely the damage caused through explosions on Nov 21 to electricity pylons causing a total blackout.

The statement goes on to speak of the danger that the lack of electricity poses for healthcare institutions, and calls this an attempt on the life and health of the civic population of Crimea, for which the perpetrators must one answer.

In view of this, the Crimean parliament sees fit to remind the reader that genocide is a grave crime that violates norms of international law and is a serious danger for human rights.    It therefore calls on Russia to help in appealing to the UN General Assembly and Security Council; the CIS; OSCE and the Parliamentary Assembly of the Council of Europe.

These bodies should, it asserts, carry out an investigation into Ukraine’s alleged violation of its obligations to prevent genocide.   The issue of the blockade should be urgently put on the agenda of the Security Council, and after consideration, be handed to the International Criminal Court.    Ukraine, it claims, should be called on to clearly observe its obligation to fight terrorism and disarm unlawful formations.

It finally calls on the Russian Prosecutor General and Russian Investigative Committee to carry out an investigation into alleged genocide against residents of Crimea by Ukrainian MPs, “including the formation of criminal groups aimed at damaging the health and endangering the life of people in conditions of the Crimean blockade”.

Russia and the leaders it installed in Crimea have consistently failed to investigate murders, abductions and disappearances committed since Russia’s annexation of Crimea.  They have also ignored the legitimate human rights demands initially posed as the conditions for an end to the goods blockade.  These include the release of political prisoners and end to persecution of Crimean Tatars and all who oppose Russia’s annexation.

Mustafa Dzhemiliev is doubtless correct in saying that the international community will not take this « absurd » statement seriously.  In fact,   its authors have chosen to ignore the fact that Russia has already been stripped of its rights at the Parliamentary Assembly of the Council of Europe because of its invasion of Crimea and military aggression in Donbas.  The penalties are likely to be extended at the PACE winter session beginning on Jan 26.

Dzhemiliev has announced that the blockade in any case is “changing its format” in light of Ukraine’s ban on supplies to Crimea.

Legitimate concerns have been expressed over the last four months about the behaviour of some of the participants in the blockade.  However the recent reports, as well as suspiciously well-organized protests over overt criminals, wearing camouflage gear with the emblem of the ‘Aidar’ volunteer battalion, do bear some of the hallmarks of deliberate provocation.

Nobody ever admitted responsibility for the damage caused to the electricity pylons.  On the other hand, Crimean Tatar leaders had long expressed frustration that the Ukrainian authorities were maintaining a policy effectively of business as usual, while the rights situation in Crimea continued to deteriorate and huge numbers of Crimeans had been forced from their homeland.

The de facto authorities in Crimea are understandably stressed by the current situation which is belatedly demonstrating what Putin and his military generals should have understood from the beginning.  Crimea is Ukrainian in law, but also for geographical and logistical reasons.  The peninsula depends on Ukraine for much more than Russia can provide for the foreseeable future.

The claims of ‘genocide’ are absurd, but are also now misplaced.  If Ukraine bore some responsibility for the electricity blackout in November-December, the responsibility lies now with Putin. He failed to understand the consequences of his land-grab back in February 2014, and is now showing his customary – and criminal – indifference to the suffering he is forcing on Crimeans.