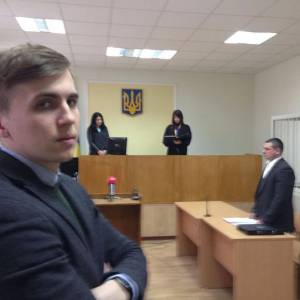 Journalists are finally able to report a victory, albeit modest, over an SBU [Security Service] attack on journalists investigating SBU officers’ luxury cars which bear no relation to their official income.  Mykhailo Tkach reports that the Pechersky District Court ruled on Jan 19 that he and Kyril Lazarevich had been detained and held unlawfully.  The chief guard, identified only as Bondarev, was thus found guilty of exceeding his powers in what was a specific administrative case, and according to Katya Gorchinskaya will be held in military detention for 2 days if the ruling is not successfully challenged.  She points out that the case is important because the journalists were recognized as victims.  Most importantly the court accepted that there had been a forced detention which the SBU had denied, and that there was no way that the SBU officers could have taken them for terrorists, not journalists.  .

The good news, unfortunately, ends there, and more was involved that day than unwarranted detention.  Tkach and Lazarevich were preparing a program on the luxury cars driven by members of the SBU.  The investigation was totally legal and certainly in the public interest, given that the SBU is supposed to fight corruption.  Nonetheless SBU guards first accosted the men, dragging them off to another building and damaging their video camera.  They then resorted to threats to try to prevent their program being broadcast.

Although there was outcry and the journalists received assurances that the incident would be properly the end of 2015 Ukraine’s military prosecutor’s office terminated criminal proceedings over the attack.

The prosecutor claimed that the SBU servicemen ‘had not realized’ they were obstructing the journalists and hadn’t intended to damage their video camera.

The journalists who are from the Skhemy: Corruption in Detail program which is run jointly by Radio Svoboda and UTV-1, aided by a media lawyer from the Regional Media Development Institute will be appealing against the decision.

Anastasia Ivantsova from Radio Svoboda spoke with the senior investigator Oleh Korniyenko who asserts that there isn’t enough evidence to continue proceedings under Article 171.  He also claims, however, that “the place where Tkach and Lazarevych were detained, is under constant CCTV surveillance and a patrol, and therefore the actions of the unit met the requirements of the charter for the Armed Forces interior service.”

Tkach fully intends to keep fighting for the reinstatement of that investigation.

The successful appeal was clearly brought at the insistence of the journalists themselves.  Two years after Euromaidan, protection by the state of journalists carrying out their work remains on paper, namely a norm which criminalizes obstruction of journalists in their work, but seldom gets applied.  . Most worryingly,  such impunity is fairly often in cases where journalists have been exposing alleged corruption by law enforcement officials

There were 105 cases where Ukrainian journalists were obstructed in their work during 2015.  According to the Institute for Mass Information, there was ‘only’ one case of beating or attack on journalists in December, against 5 in November; 10 in October and 6 in September.   Although statistics have not yet been provided, it is likely that few criminal investigations under Article 171 of the Criminal Code were initiated.

As reported, two journalists and a number of protesters were detained on Oct 2, 2015 near the Bohodukhiv Oil Depot in the Kharkiv oblast.

If the slightly earlier attack outside the SBU had at least elicited a formal apology, here there were two totally different stories - the police version of events which simply ignored the presence of journalists and that given by journalists and backed by video footage,  Serhiy Moskalenko and Viktor Pichuhin, from the Kharkiv office of the civic journalist initiative Hromadske TV, reported that they had been invited to cover a protest against allegedly illegal oil processing at the Bohodukhiv Oil Depot.  Within 3 minutes, 8-10 cars with police number plates turned up with uniformed officers getting out of them.  On the video, a person not wearing a balaclava, appears to be talking quite peaceably to the police.  He asks the person in plain clothes why the police are allowing such ‘lawlessness’.  The officers can be seen trying to search the protesters’ van.  Seemingly because the latter objected, they were forced to the ground.  The journalists say that the men were detained and forced into a police van, with one of them hit on the head.  Despite the fact that Moskalenko was wearing a press jacket, and both men clearly stated that they were journalists, Moskalenko and Pichuhin were also taken away in the police van.  All of this can be observed on the video

According to the police press service statement, “a group of young people in balaclavas obstructed the vehicle entrance to the enterprise, threatening its employees with reprisals and then resisting the police.  They allegedly tried to take the men to the police station to establish their identity, but the men refused and began showing resistance.  At this point “in accordance with the Law on the Police”, physical force was used to get the men to the police station in order to draw up administrative protocols.

In July, an activist linked to another Skhemy anti-corruption investigation was attacked.  Oleksandr Kulibabchuk ended up in hospital with head injuries after being beaten unconscious by assailants.  His wife Natalya Rostova told Radio Svoboda that the men were lying in wait outside their home in Irpin (Kyiv oblast).  She is convinced that the attack is linked with her role in helping journalists from the ‘Schemy. Corruption in Detail’ programme investigate alleged corrupt dealings by the Mayor of Irpin, Volodymyr Karplyuk.

In May, another film crew from ‘Schemy: Corruption in Detail’ was attacked in Kominternivske, near Odesa.  Journalist Maria Tymoshchuk and cameraman Maxim Lenko were on a work-related task near the office of Lemodo, a firm which recently won an Interior Ministry tender to provide vehicle number plates worth 70 million UAH.  The company is registered in the Odesa oblast, and up till this successful tender had never been engaged in such activities.

According to Tymoshchuk, they arrived at what proved to be the extremely modest Lemodo office.  The one room was closed, and they photographed the sign on the door, and spoke with people in other offices.  Somebody ran up to them shouting that they mustn’t film there, that they didn’t have permission, and smashed their video camera.

On May 14, Interior Minister Arsen Avakov’s deputy Serhiy Chebotar was forced to resign after investigative journalists from the TV ZIK programme ‘Nashi hroshi’ [‘Our Money]] were set upon by the security guards when they tried to photograph a large house which, despite Chebotar’s denials, did prove to be owned by the Deputy Minister’s wife.

In all of these cases, formal complaints were made.  None resulted in any serious proceedings.

Ivantsova spoke with media law specialists who say that investigators often try to reclassify charges – to hooliganism, for example, which they say are easier and more familiar.  There is little practice of such cases and so investigators try to avoid them.

There need to be current cases where journalists have been forced to turn to Strasbourg to highlight the failure to properly investigate attacks and obstruction at home.  This could help to break through the ongoing assumption of impunity.

It is no accident that in many of the above-mentioned cases, journalists were investigating suspected corruption by law enforcement officials.  The message from any such case going unpunished is disturbing.