Praised on Russian radio for war crimes in Crimea & Donbas 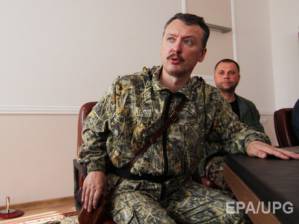 Igor Girkin, with another Russian Alexander Borodai  in the background

Perhaps it was the first time that Igor Girkin [Igor Strelkov] publicly admitted to carrying out extrajudicial killings during his period as military leader of the Kremlin-backed militants in Donbas, but his senior aide Igor Druz had confirmed this to the BBC back in August 2014.  If Girkin admitted only to killing ‘looters’, Druz was entirely open, saying that the militants had killed a number of people “to prevent chaos”.   He and his comrades, Druz said then, were confident of victory over the Ukrainian government whom he called “Kyiv terrorists”.  He was convinced that most of the militants supported the introduction of the death penalty for grave crimes.

During the interview given to Komsomolskaya Pravda, Girkin was asked how he had fought looting.  With executions, he answered, saying that in a state of siege there was only a military court.  He claimed that they had carried out 'trials' and executed people  on the basis of a law brought in under Joseph Stalin during the Second World War (in 1941).  While he was in control of Sloviansk, he said, four people had been ‘executed’.  Of these, two were supposedly soldiers caught looting, one a local, and one person, a Right Sector supporter, for killing a soldier.

His arithmetic is almost certainly faulty, but of that later.  In response to a comment about being a war criminal in international law, he responded that he not at all bothered by international law which is “an instrument in the hands of the conquerors”.   It will be applied if they lose, but in fact he says, he is convinced that he will not end up before the International Criminal Court in the Hague.

Girkin is believed to have been a GRU or Russian military intelligence officer until at least 2013.  He was heavily involved in Russia’s invasion of Crimea, before moving to Donbas where he led the heavily armed men who seized control of Sloviansk in April 2014.  He later acted as ‘defence minister’ of the so-called ‘Donetsk people’s republic’.

Girkin now has a totally free hand to give interviews to pro-Kremlin publications, and one assumes his apparent ‘criticism’ of Putin suits the Kremlin’s leader, as well as his insistence that he and others were ‘volunteers’.  Girkin claims, for example, that it would be hard to have followed Kremlin orders as it is never clear what they want.  That may be true now, after Putin discovered that Donbas was not so easy to seize, but it is hardly credible back in 2014.

He does, however, rather debunk the myth around ‘separatists’ fighting for independence.  The fate of the occupied areas of Donbas, he says, “is decided in Moscow”, with this dependent entirely on Russia’s support.  He believes that the so-called ‘republics’ will with time become part of Russia and adds that this was what the uprising "under Russian flags", was about, not some kind of independence.  It was quite evident back in 2014 that the first militants, including local activists like Pavel Gubarev, were anticipating becoming part of Russia.

During the interview on the Kremlin-loyal Komsomolskaya Pravda, Girkin was asked by a caller how he could have seriously expected to come in and seize Donbas from Ukraine and change its status.  He slightly ducks the question, acknowledging only that they had been seized by “Crimean euphoria”, by the ease with which they had taken Crimea.

It seems clear listening to interviews during that period given by Putin and ideologues close to the Kremlin that the same euphoria had gripped the Russian President as well.   Putin miscalculated and Donbas has proved anything of a walkover.

Girkin was removed together with other Russians when it became politically expedient for the Kremlin to install Ukrainian nationals.  In his case, there may have been added impetus to get him out of Donbas because of his believed role in the downing of the Malaysian airliner MH17 which the militants triumphantly reported to the Russian media initially as the downing of another Ukrainian military transport plane.

One of the most disturbing parts of the program is in fact the way Girkin is introduced to the audience.  He is referred to as “hero of the Russian Spring” who “defended Donbas” as the audience’s ancestors had once defended Russia.

Anybody following events during the months that Sloviansk was under militant control will recall that it was simply hard to keep up with the abductions and hostage-taking and there were a large number of cases of torture and killing as well as extrajudicial executions.

At least one mass grave was found after the militants fled, together with execution orders signed by Girkin.

Girkin had his headquarters in the Sloviansk SBU [Security Service] building.  Hostages were held in the basement there, as well as in the central police building, and in both places were subjected to torture.  ‘Executions’ were carried out in the police investigators’ offices on the basis of ‘death sentences’ passed by a ‘military tribunal’ made up of militants referred to as “Nos” [Nose], Sedoy [Grey-haired], etc.  Some of these executions are known to have taken place.  31-year-old Oleksy Pichko, for example, was ‘sentenced to death’ and shot by firing squad for stealing two shirts and a pair of trousers from a neighbour’s home.  Vitaly Solovyov was 36 when he was arrested in the home he shared with his elderly grandmother, accused of looting and sentenced to death by this same grotesque ‘tribunal’.   Another such ‘trial’ and execution order was of a 25-year-old student who had arrived in Donbas to defend his country.

A mass grave was also found, and Simon Ostrovsky, who was himself taken hostage for a while reported from the scene as bodies were brought out.

Other victims included Volodymyr Rybak, Deputy of the Horlivka City Council, who was abducted while at a rally in support of Ukrainian unity.  He had sought to remove the flag of the self-proclaimed Donetsk People’s Republic and there is a video of him being seized by pro-Russian militants and taken away.  His tortured and mutilated body was found a few days later together with those of 19-year-old student Yury Popravko and 25-year-old Yury Dyakovsky.

These are only some of the victims, abducted, tortured and killed with the direct involvement of his so-called ‘hero of the Russian Spring”.