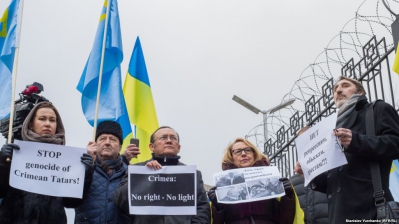 Ukraine’s far-right has no need to look for mythical enemies when there’s a real enemy to be fought and their country truly needs to be defended.  That is one of the reasons put forward in explaining the good news that the last 2 years of conflict, first on Maidan, then because of Russian aggression have not led to an increase in anti-Semitic and xenophobic violence in Ukraine.  In fact the situation has even slightly improved, with one reason especially cheering.  For the first time in the 15 years that monitoring has been carried out, real cooperation is taking place between monitoring organizations and state bodies, including those involved in law enforcement.

A new study from the National Minority Rights Monitoring Group entitled Two Years of War: Xenophobia in Ukraine 2015 reports a dangerous increase in xenophobia only in Russian-occupied Crimea.  Even in areas under Kremlin-backed militant control – the so-called ‘Donetsk and Luhansk people’s republics’, there appears to have been a decrease since 2014. although at a press conference on Jan 20,  the Director of the Congress of National Communities Josef Zisels left no room for illusions about the reasons for that drop.  Over half of the members of the Jewish community, according to their estimates, have left Donbas, as have believers from Protestant, Greek-Catholic, Evangelical and other churches, and Orthodox believers attached to the Kyiv Patriarchate.  The report mentions also that virtually all foreign students have left, and so too have the Roma.  The leaders of the self-styled ‘republics’ regularly come out with anti-Semitic utterances, however no incidents of anti-Semitism have been recorded.

One problem here, however, and in Crimea, remains the enormous difficulty of collecting and verifying information.  Those who reveal details may put themselves in danger as a result and enormous care is needed.

This is, of course, also the case with those expressing a pro-Ukrainian position which can be simply dangerous.

The problems in Crimea are far worse.  A much smaller percentage of those likely to be at risk have left, with Crimean Tatars continuing to face systematic discrimination.  The report itemizes cases of repression and persecution written about here, including:

While all those who oppose Russian occupation are at risk, it is very often Crimean Tatars who are targeted even for Ukrainian national symbols and colours. FSB & Cossacks carry out raid on Crimean Tatar village over Ukrainian symbols

Despite all efforts to present Ukraine as a hotbed of anti-Semitism, only one possible anti-Semitic incident was recorded in 2015, against 4 the previous year.  It was stressed at the press conference that this only serves to confirm the long-held suspicion that many of the apparent incidents in 2014 had been provocation used as part of the information war against Ukraine.

All such attempts were publicly rejected by leaders of the Jewish community in Ukraine, as well as by human rights groups, and, of course, the authors of the latest report – Viacheslav Likhachev and Tetyana Bezruk.  Likhachev in particular has 15 years’ experience of monitoring anti-Semitism and xenophobia in Ukraine, and his presentation of hard facts against the attempts to push ‘anti-Semitic horde’ misinformation was invaluable.

Likhachev was particularly positive about the new attitude seen from the authorities, including in the police, and said that they have established very constructive relations, going beyond simply exchanging information.

There is, however, one exception since the police have not dazzled when it comes to the increased number of incidents of xenophobic and anti-Semitic vandalism in 2015.  Likhachev suggests that in a society traumatized first by the actions against protesters during Euromaidan, then the war, the tolerance threshold for symbolic violence, through foul words or symbols as graffiti, for example, has become lower.  The culprits in such cases are virtually never caught.

One other area which slightly falls outside the scope of the monitors was mentioned, namely homophobia.  Here, in fact, the far right is all too vocal and sometimes violent, as was seen in Kyiv in June 2015.  On the eve of the planned Equality March, the leader and other members of the Ukrainian ultra-nationalist Right Sector party came out with anti-LGBT and anti-western statements identical to those regularly churned out by their ideological opponents in Russia.  Some homophobic thugs did not, unfortunately, confine themselves to foul utterances and calls for the march to be banned.   During the march, police endeavouring to protect the participants were hurt, one with a life-threatening, though thankfully not fatal injury, while some of the participants were beaten up after they left the area.

The report was, for unfortunately understandable reasons, ignored by all pro-Kremlin media.