Will the West accept Potemkim elections in Donbas? 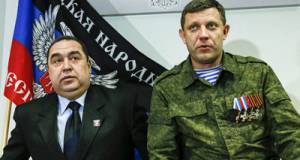 The Kremlin-backed militants of the so-called ‘Donetsk and Luhansk people’s republics’ are refusing to allow Ukrainian parties to take part in their local elections.  This alone would make Western recognition questionable and it is only one of multiple sticking points.

Alexander Zakharchenko, leader of the so-called ‘Donetsk people’s republic’, has stated clearly that Ukrainian parties will not be allowed to take part in the events he claims will be elections in accordance with the Minsk Agreement.  The latter states that local elections are supposed to take place in accordance with Ukrainian legislation and on the first day after the pull-out of heavy weapons.

At a press conference in Donetsk, Zakharchenko claimed that they were fulfilling the Minsk Agreement and must hold elections, but that they “will hold them according to the laws of the Republic and on our land.”   These elections, so he asserted, would be ‘the people’s’.  He said that they are a people’s republic and are spilling blood for their freedom.  He accuses the Ukrainian parties of calling to fight against Donbas, and providing economic aid to the Ukrainian battalions.  There would also be no ‘oligarch’s parties’, he announced.

The announcement in October that the Kremlin-backed militants had postponed illegal elections was hailed as a great breakthrough.  There is no sign as yet of any real progress in fulfilment of other conditions of the Minsk Agreement, nor of any serious intention to hold real elections.

Neither the militants nor Moscow are showing any intention of releasing the Ukrainians they are holding prisoner, with these including civilians held hostage in Donbas, and a number of Ukrainians, including Nadiya Savchenko, Oleg Sentsov and Oleksandr Kolchenko, held illegally in Russia or Russian-occupied Crimea.   An exchange was planned last week, but did not take place.

It is certainly of relevance to the planned elections that the civilian hostages include one Luhansk journalist Maria Varfolomeyeva.  She is hopefully the last journalist now held hostage, but by no means the only one who has been imprisoned, with a number of others recounting horrific tales of torture while held in captivity.

This is no small matter when one of the requirements before elections are held is that Ukraine passes a law offering ‘immunity’ and an amnesty for all participants in the elections, including the militant leaders.

It is also a chilling message to journalists wishing to cover the elections, with coverage one of the key problem areas.  Most independent journalists were forced to flee Donbas, and there is little or no access to alternative media in areas under militant control, with even a large number of independent Internet sites blocked.

According to Roman Bezsmertny, one of the Ukrainians present at tripartite talks in Minsk, the militants have demanded some kind of ‘accreditation committees’ attached to their electoral commissions which would deal with the media.

OSCE representatives have instead proposed drawing up “a code for the media during the elections”.   This would be formulated by a group made up of equal numbers of members of the public, international go-betweens and journalist unions.

Why such a ‘code’ would be required is not explained and sounds suspiciously like a means of concealing the lack of free media access.

Bezsmertny reports that the militants back in Minsk rejected participation by nationwide Ukrainian parties, and any role for Ukraine’s Central Election Commission.  There is no information as to how their own ‘electoral commissions’ would be formed.  Another sticking point is the militants’ refusal to allow Ukrainian courts to resolve electoral disputes.

There is no agreement even as to the areas in which elections would take place.  Nor is there any information about another crucial requirement for fair elections, namely, that Ukrainians who fled the fighting or persecution in Donbas should be allowed to take part in these elections.  Such displaced people were most controversially deprived of the right to take part in the nationwide local elections in October 2015.

The Minority Rights Monitoring Group has just published a report on xenophobia in Ukraine over the last 2 years, in which it notes a major increase in xenophobia in Russian-occupied Crimea.  In all the rest of Ukraine a fall was seen, however the researchers point to specific factors which should be taken into account with respect to Donbas.  There has been a very significant exodus of most of the groups at risk, including all religious denominations, aside from the Orthodox Church under the Moscow Patriarchate, foreign students, Roma and over half the Jewish community. Very many people who do not fall into of the above-mentioned groups were driven out, such after being held hostage and / or tortured, simply for supporting Ukraine and / or speaking Ukrainian.  The Monitoring Group also stresses how difficult it was to gain and verify information, since those providing it could be in real danger if caught.

The fact that so many Ukrainians – for ethnic, religious or ideological reasons – are not able to live in their own homes, and will either not be able to vote at all, or not vote for real alternatives, undermines the credibility of any elections held under ‘special conditions’.

There have recently been some serious incidents in which OSCE monitors came under fire, and the monitors are constantly denied access to areas under militant control.  Confidence under such circumstances that observers will be free to monitor elections is strictly limited.

In the latest issue of the weekly Dzherkalo Tyzhnya, Serhiy Rachmanin writes that according to their sources, Russia is willing to accept a delay to Ukraine’s constitutional changes on decentralization.  Instead, he writes, Moscow is demanding that Ukraine passes three laws: on the so-called specific features of local self-government in areas under militant control; on an amnesty for “participants in the events on a part of the territory of the Donetsk and Luhansk oblasts”; and on elections.

The author writes that Moscow is even willing to remove the particular war criminals whose amnesty would most outrage Ukrainians.  These, he says, would be given the choice to go and “defend the Russian world” in Syria, or face the same fate as other militant leaders killed over recent months.  The most offensive individuals, in fact, would simply be eliminated.

In the same negotiating style, Russia is reported to be ready to find more ‘cooperative’ replacements for Zakharchenko and the leader of the so-called ‘Luhansk people’s republic’, Igor Plotnytsky.

The fact that Moscow can offer such deals is hardly any surprise.  Western countries can safely put pressure on Ukraine to adopt a highly contentious amnesty bill, since the leaders believed implicated in the downing of the Malaysian airliner MH17 on July 17, especially Russian Igor Girkin, were circumspectly removed by Moscow during a previous tactical change late in the summer of 2014.  Russia badly wants sanctions removed, and is therefore making such ‘offers’.  These can be interpreted as for the West’s benefit, with the latter eager to put the whole problem behind them.  More bluntly, dump it on Ukraine  who would simply have to hope that Russia did not resume its military aggression and attempts to destabilize the country.

Even without the suspicion that opponents of the current militant leaders have been physically eliminated, the chances of giving a democratic gloss to any elections are next to nil, and it would be well for Western countries to understand this.