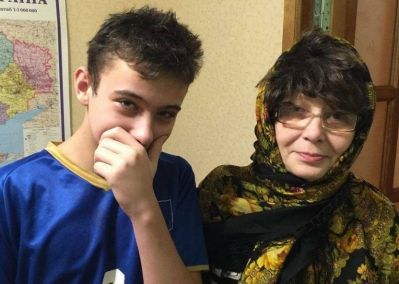 Russian civic activist Irina Kalmykova has been forced to flee Russia where she was facing the same charges over totally peaceful protest that resulted in a three-year prison sentence for Ildar Dadin.  Like 76-year-old Vladimir Ionov,  Irina and her 14-year-old son have come to Ukraine, and are clearly in need of asylum.  Irina’s daughter Olesya has remained in Russia, caring for her grandmother who recently underwent an operation.

Irina Kalmykova was the fourth person to be charged under draconian new anti-protest legislation introduced in July 2014.  A new Article 212.1 of the Russian Criminal Code allows, among other things, for criminal prosecution and a sentence of up to 5 years imprisonment, if a Russian court has issued three rulings on administrative offences within 6 months.

Since Vladimir Putin came to power, freedom of assembly has been severely curtailed and it is quite standard for people to face administrative charges for attending a demonstration.  The police claim that the person did not obey a legitimate order or similar, and this is effectively never questioned by the courts.  Even single-person pickets which do not need to be agreed with the authorities can get a person into trouble.  In Soviet tradition, provocateurs are used to come up to the single picketer and either cause trouble, or simply refuse to move, enabling the police to claim the person was holding “an unauthorized meeting”.  It should be stressed that ‘unauthorized’ here means only that the authorities are breaching Russia’s Constitution by refusing permission to hold peaceful gatherings.

The Memorial Human Rights Centre condemned the new criminal charges, rightly stating that the new law destroys freedom of assembly in Russia which is guaranteed by the Constitution.

The first sentence under this law proved even more repressive than feared.  On Dec 7, 2015, Judge Natalya Dudar from Moscow’s notorious Basmanny Court added a year to the 2 years demanded by the prosecutor and sentenced civic activist Ildar Dadin to a 3-year real term of imprisonment. There are strong grounds for suspecting that the severity of the sentence was linked with Dadin’s active support for Euromaidan.

Dadin was one of three people arrested in January 2015.  The then 75-year-old pensioner Vladimir Ionov and Mark Galperin were arrested first, but were not held in custody until Dadin.  He was arrested on Jan 30 and placed under house arrest, with this prompting the Memorial HRC to declare him a political prisoner.  There has been protest both within Russia and abroad over the sentence passed on Dadin and calls for his release.

Irina Kalmykova was charged under the same article of the Criminal Code on July 8, 2015.  She was also accused of four ‘episodes’:  1) an unauthorized march on Dec 5, 2014 with a banner reading “Yesterday Kyiv, tomorrow Moscow”;  2) an unauthorized picket reported here on Jan 26, 2015, in support of Nadiya Savchenko and other political prisoners;  3) a demonstration in support of the Bolotnaya Square protesters on 6 May.  Grani.ru points out that Kalmykova was even initially jailed for 6 days although this is illegal since she has an underage son.  The detention order was overruled; 4) a demonstration on May 26.

The first court hearing was on Oct 1, with Irina Kalmykova stating clearly that she had broken no law and that the Constitution guarantees her freedom of assembly.

The increasingly repressive measures taken against peaceful protest in Russia, as demonstrated so brutally in the sentence against Ildar Dadin, gave every reason to fear that Irina Kalmykova and Vladimir Ionov could also face real sentences, or suspended sentences demanding that they fall silent.

A Russian court has already placed Vladimir Ionov on the wanted list.  A court hearing in Irina Kalmykova’s ‘case’ took place on Jan 25, with this postponed until Feb 4 due to her absence.  It is almost certain that she will also be declared ‘wanted’.

Ukraine’s authorities have disgraced themselves on a number of occasions in their treatment of people clearly facing persecution at home.  The cases of both these two Russian civic activists are indisputable.  Both are facing possible imprisonment for peaceful protest under a law which has no place in a democratic society and must be granted asylum.