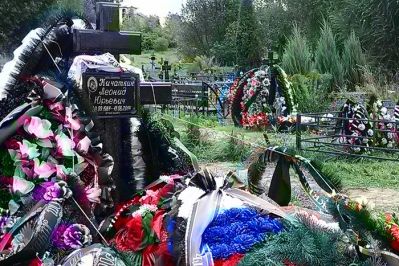 The grave of the Pskov paratrooper whose death was reported by Lev Shlosberg, then denied by somebody claiming to be the deceased man’s wife

Russia’s chief military prosecutor has refused to investigate the death of 159 Russian soldiers who are believed to have been killed in Russia’s undeclared war against Ukraine.  The prosecutor’s office asserts that checks were carried out into all deaths from the beginning of 2014 to mid-2015, and no infringements were found.

This view was categorically not shared by Sergei Krivenko and other members of the President’s Human Rights Council.  On Dec 8, 2015, they formally demanded an official answer as to the circumstances in which 159 Russian soldiers had been killed.    The human rights activists pointed out also that there had been a sharp increase in such unexplained deaths during the second half of 2014.  This coincided with the first publicized reports of soldiers’ deaths in Donbas, as well as a major escalation in Russia’s direct military involvement in eastern Ukraine.

Russia does not make it easy, with no official information on military deaths having been published since 2010.  It is known that the increase in number of contract soldiers, as opposed to conscripts, has had a positive impact on the number of suicides, murders and fatal accidents.  That, however, only accentuates the dramatic increase in deaths during the second half of 2014.

According to Krivenko, there were 108 reports of soldiers’ deaths from July to December 2014, with the region where the person died named in only 28.  In 80 cases there is no mention of cause of death.  In 72 there was mystery over the region.  In only 38% of the cases was there any indication that the prosecutor had initiated an inquiry.

Krivenko says that he asked for information about each specific soldier.  Instead he received vague assurances that checks had been carried out, that all was fine and that no criminal investigations had been launched.

They will be able to investigate the deaths of specific soldiers only if the soldiers’ families agree to this.

The problem is likely to be in pressure clearly being brought to bear on these families.  Soon after Lev Shlosberg reported the death of two paratroopers from Pskov, journalists trying to report on the deaths were set upon by unidentified individuals and Shlosberg himself sustained a savage attack.  The initial reports of the men’s death on social networks were removed, and there were even attempts by one of the men’s wives to claim that her husband was alive.  It is not known whom she handed the phone to on that occasion, but it was not her husband whose grave can be found where it was reported.

Direct pressure placed on relatives is compounded by legitimate concerns shared by all, including journalists, that they can now be accused of divulging ‘state serious’.  As reported here, on May 28, 2015, Russian President Vladimir Putin issued a decree which classifies all information about Russian military losses during “special operations in peacetime”, without providing any definition of ‘special operations nor any clarity as to what information is to be concealed.

Putin’s decree was challenged in the court by a group of nine activists, lawyers and journalists.  The group included prominent human rights lawyer Ivan Pavlov, Lev Shlosberg and Svetlana Davydova, a mother of 7 arrested earlier on charges of ‘state treason’ for informing the Ukrainian embassy about Russian soldiers being sent to Donbas.

They argued that Putin, and his predecessor Boris Yeltsin, had exceeded their powers by classifying information about military losses. Russia’s Constitution clearly states that the constitutional right to freely seek, receive and circulate information can only be restricted by federal law, not by a presidential decree.

The Law on State Secrets does not give the President the power to extend the range of state secrets, and a decree is not a law.   Information about emergency situations cannot be classified at all.  According to Article 7 of the Law on State Secrets, “information about exceptional occurrences and catastrophes, jeopardizing citizens’ safety and health, and their consequences” may not be classified.

The arguments were based on Russian law and compelling, yet were rejected by Russia’s Supreme Court in August 2015.

Russia’s leaders are thus able to wage undeclared war on Ukraine, killing their own solders as well as thousands of Ukrainians, while calling this a ‘special operation’ hidden from the public eye as a ‘state secret’.