Well-known Russian actor fights for right to stay in Ukraine 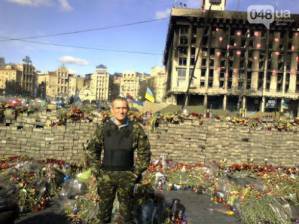 Sergei Anisiforov in Kiev during the Maidan

Sergei Anisiforov, 45, gave up a successful career as a TV and film actor in Russia to participate in Ukraine’s Maidan. Now he is part of the Odessa Maidan self-defence forces, but he is also battling the Ukrainian Migration Service for the right to remain in the country legally. Anisiforov talked to X Soviet about his situation.

“My parents abandoned me when I was born, ” Anisiforov said. “I went to school in a children’s home. After the army the wild 1990s started. I went to prison. I got out in the early 2000s. And fate gave me a chance – films. Moreover, a lot of crime serials were filmed in St. Petersburg. My typecasting played an important role in my life.  No one is more accustomed to tyranny, lawlessness and injustice than I am, because since my childhood I’ve been through fire, water and copper pipes. I had to do everything in my life myself, there was never any help.”

Anisiforov got his first break in 2008 when he was cast in the penultimate episode of the series “Brothers”, chosen for his rough looks. “We were called to an arrest at a flat, then I was in a scene outside with the main character, kidnapping a child, ” he said. Ironically, Anisiforov was even photographed with Putin. “The best moments in films for me were the socialising, ” Anisiforov said. “Many luminaries of Russian cinema taught me about life, ” he added.

“In 2011 I started to understand the situation in the country, ” Anisiforov said. “Plus in 2011 after filming in Odessa I got very sick. When I returned to Russia I went Cherepovets in Vologda Oblast for an operation. I started working with the Other Russia party and took part in protest actions in Cherepovets against the policies of the governor of Vologda Oblast and Putin’s policies. In October 2013 I went to Ukraine on personal business. I had been to Ukraine more than once after 2011. I went to improve my health by the sea after the operation. Unfortunately I saw an unstable situation there. That’s why I joined the ranks of the Euromaidan in December 2013, ” he continued.

“I came to the Maidan in Kiev in early December 2013, ” Anisiforov said. “I went through [the shootings on] Hrushevsky and Institutskaya [streets]. I got a concussion. In April 2014 I couldn’t leave Ukraine from the Maidan to get a stamp in my passport to legally come to Ukraine. After recovering in hospital in May I was in an illegal situation. In July I applied to the Kherson Migration Service to be given refugee status, since I couldn’t go back to Russia, ” he explained. In October 2014 Anisiforov made a video appeal to President Petro Poroshenko asking for Ukrainian citizenship.

“Serious threats have been made against me by anonymous people in Russia because I went against the Yanukovych-Putin regime in the Maidan, ” Anisiforov said. He gave X Soviet a screenshot from a message to him on the social network VKontakte in which a man calling himself Stanislav said, “You’ll all be wiped out by Chechen special battalions, you’ll be cut up like rats!”, accompanied by a photograph of hanged men. Anisiforov is also pictured in camouflage, holding a weapon, on the website Tribunal, which promises that “retaliation will come”.

“I supported the Ukrainian people in their struggle against tyranny and so on, ” Anisiforov said. “After two weeks the Migration Service refused to examine my application. I started to appeal their decision in court. Since 2014 I’ve won in all courts right up to the Supreme Court, but the Migration Service appeals all the rulings. They don’t want to admit that I’m in danger in Russia, although all the courts recognise that I can’t go there, ” he continued.

“The Migration Service refuses to look at what’s happening in Russia, and says that Russia is a democratic country, ” Anisiforov said. “The structure of the Migration Service still hasn’t undergone reforms and lustration hasn’t happened. After my first refusal I went to the UN Refugee Agency in Ukraine. Their lawyers have been dealing with my case in the courts for almost two years. I’m also the only Russian from the Maidan who goes to the courts. The others gave up on the courts at the first instance. I’m not giving up and I don’t plan to, ” he added.

“Now I’m facing my fifth court, we constantly present new evidence in the courts about what’s happening in Russia, and the dangers that are threatening me, but the Migration Service doesn’t want to accept it, ” Anisiforov said. “I know [Russian political emigres] Vyacheslav Martynov, Petr Lyubchenkov and Vladimir Malyshev from back in the Maidan. You need to give people the opportunity to become legal in Ukraine. The country should accept them, this concerns all Russians who have been fighting on the front for Ukraine. Unfortunately we’re seeing the opposite. The Migration Service is preventing this. It’s clear that going back to Putin’s Russia means death. The Ukrainian Migration Service is a branch of the FSB, there’s no doubt about it, ” he added.

“I came to the conclusion a long time ago that no one wanted us here, despite the fact that some went through the Maidan and fought in the ATO. To be honest I’ve wanted to go to another safe country for a long time, but I don’t have that opportunity to leave, ” Anisiforov said.

“The Moscow oprichnik Putin has exceeded even Hitler and Stalin, and also Ivan the Terrible, ” Anisiforov said. “Russia has gone back to 1937. I think that we need to very quickly set up a Hague tribunal and bring the Moscow tsar there under escort otherwise the botoxed dwarf will go even crazier. The punishment should be the harshest – he should be shot. He should answer for everything, ” Anisiforov insisted.

“I’ve been in the Maidan self-defence force of Odessa activists for a long time, ” Anisiforov said. “We fight against manifestations of separatism in all respects in Odessa. We fight against supporters of the Russian world. Thanks to the self-defence forces the LNR-DNR scenario hasn’t come to Odessa. And thank you so much to those guys for supporting me in every way. The most important thing now is to drive the aggressor Putin out of Ukraine and liberate Crimea. Glory to Ukraine!!!”