Kremlin-backed militants prove nobody is safe in Donbas 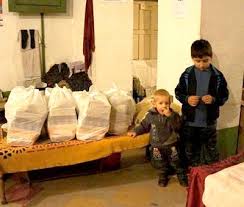 While 60-year-old religious scholar Ihor Kozlovsky and the coordinator of a volunteer initiative Marina Cherenkova remain imprisoned by Kremlin-backed militants in Donetsk, Cherenkova’s fellow volunteers have been forcibly removed from militant-controlled territory.  There is no obvious reason why the particular people have been targeted, making this sudden escalation in repression particularly worrying.

Four members of the volunteer initiative ‘Responsible Citizens’ which Cherenkova heads have now been forced to leave Donetsk after 7 hours of interrogation.  Although no formal charges were brought, Enrique Menendes, Dmytro and Yevhen Shibalov, and Olha Koss were ‘accused’ of cooperating with international humanitarian organizations, including Médecins Sans Frontières (MSF) and Save the Children.

Menendes told a Radio Svoboda journalist that their office in Donetsk which is fully equipped with technology, etc. has been sealed up and they were forced to leave everything except personal items.  Out of their six cars, four were seized.

Cherenkova and ‘Responsible Citizens’ also cooperated with oligarch Rinat Akhmetov’s charity and were in fact viewed by many of those who had been forced to leave Donbas as overly loyal to the so-called ‘Donetsk people’s republic’ [‘DNR’].

Back in January, Menendes, for example, had written a post on Facebook, anticipating with approval a new wave of people returning to Donbas.  He suggested that this would prove an important new stage in regulating the conflict.  He and the other three have now been forced to leave, “without the right to return”.

Menendes’ encouragement of people to return was rejected from the outset by prominent Donetsk journalists now in exile, like Denis Kazansky and Oleksy Matsuka.  They have long warned that nobody is safe in the so-called ‘republics’, and have reiterated this in recent days.

Certainly the latest wave of arrests prove their point.  From the outset it was clear that although only two people were named, others had been seized.  Oleksy Matsuka writes, for example, that there is also information about people from Donetsk who arrived in the city to visit relatives.  They were seized by the ‘DNR’’s enforcement bodies and are now being held with formerly seized hostages.

Matsuka writes also that there have been searches in the homes of some Ukrainian language and literature teachers in Donetsk, as well as members of Ukrainian civic organizations.  The organizations are now banned from working in ‘DNR’, but the members still remain.

One of the reasons suggested for the latest wave of repression was the explosion which damaged the monument to Lenin in the centre of Donetsk.  Matsuka was sceptical from the beginning and notes the suspicious speed with which the first militant appeared on the scene and declared that “Lenin survived”.

He links the latest ‘arrests’ with fear of social unrest with money from Russia rapidly running out, and disgruntlement growing.

If this is the case, then ‘DNR’ is following its paymasters in Moscow where repressive measures are also mounting in parallel with the plummeting rouble and standard of living.

Miners in Makiyivka were recently accused of ‘treason’ and are facing a ‘criminal investigation’ for going on strike, and there have been reports of similar reaction to protests by small business owners.  According to a local mining specialist who asked to remain anonymous, out of 33 mines in the area under militant control, only 13 are working.  Another of the methods used is, of course, to seek scapegoats, and the organized demonstration outside a Greek-Catholic Church on Jan 29 suggest that Ukrainian Churches are also likely to come under attack.

Matsuka’s analysis of the so-called ‘republics’’ financial problems will be reported separately.  The problems have long existed, making it especially frustrating that the militants first banished international aid organizations, and have now turned on ‘Responsible Citizens”.   If, as has been suggested, the Russian so-called ‘humanitarian convoys’ have been bringing money for the proxy ‘republics’ to function, then it is certainly of significance that there has been none this year.  Those convoys, and other ‘humanitarian loads’ from foreign pro-Russian politicians, are good propaganda opportunities for Russian television, but cannot help to alleviate the suffering caused both by the Kremlin-provoked and funded conflict and by the repressive measures against those trying to provide aid.