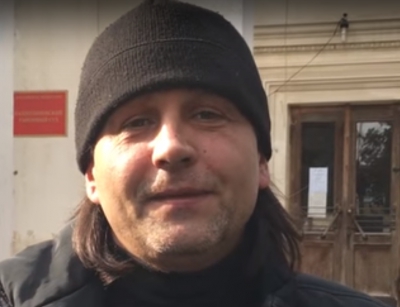 Volodymyr Balukh has been sentenced by a Russian-occupied court in Crimea to  320 hours compulsory labour after a trial condemned as politically motivated by the Crimean Human Rights Group.  Balukh will be appealing against the conviction, but believes that the Crimean prosecutor has been given the task of crushing any demonstrations of a civic stand.  He points out that while they’re going for Ukrainian patriots now, “home-grown Russian patriots” can expect the same fate.

As reported, Volodymyr Balukh was accused of ‘publicly insulting a police officer’ after searches carried out, on two separate occasions but both times in flagrant violation of all legal norms.  Olha Skrypnik from the Crimean Human Rights Group notes, for example, that the two cases against Balukh were based on the same alleged ‘witnesses’ whom Balukh had seen once in his life.  It seems that nobody was too concerned about giving this ‘trial’ any credibility.  Balukh reports that in passing sentence on Feb 4, Razdolne Court judge Tatyana Pyrzhalo referred to the wrong testimony, not that presented during the trial.  He adds that she only took into consideration testimony from the prosecution, ignoring that from the defence.

44-year-old Balukh is a farmer in the north of Crimea who first raised the Ukrainian flag over the home he shares with his common-law wife in December 2013 during Euromaidan.  It was not removed after Russia’s annexation of Crimea which Balukh opposed.  He has not taken Russian citizenship.

The problems began on April 30, 2015.  As reported, he was helping his mother at the other end of the village when two men turned up, one a police officer, the other (he later found out) from Russia’s FSB [Security Service].  They demanded that he come with them, but he refused, saying that he would only if there was a warrant.

A friend went over to his house and confirmed, as he feared, that there were men inside claiming to be from the FSB.  Balukh decided to stay away and returned only on May 10.

By then the FSB had turned up at his mother’s place 4 times.  Both his home and his mother’s had been turned upside down and the Ukrainian flag ripped down.

Although they seemed to have given up on a tractor prosecution, there was no let up in harassment.  In July 2015 he was detained for 72 hours for supposedly refusing to obey a police officer’s commands.  Once again, nobody worried too much about appearances.  After 72 hours he was brought before a court which fined him for supposedly drinking alcohol in a public place.

The second visitation was on Nov 14, early in the morning.  Balukh says that first a man in plain clothes walked straight into his bedroom and demanded to know who he was.  Then a woman turned up, said “yes, it’s him”, at which point two men in masks and another man burst in and began beating him and then dragged him out of the bedroom and forced him into their car.

Balukh’s response was spot on:  “It turns out, when they detain you, kick you around the kidneys and put their foot on your head, you’re supposed to express yourself solely using the language of Dostoyevsky.”

Before the hearing on Friday, Balukh noted that the prosecutor had said in court that the media would present this case as being an attempt to convict a Ukrainian activist.  The prosecutor was clearly implying that this was not the case, yet he had described the case in a nutshell.