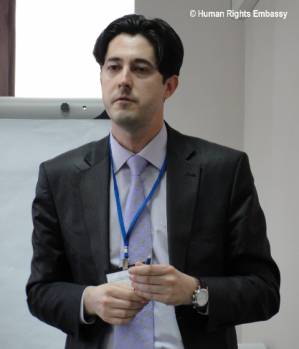 Vitaly Kasko has publicly announced his resignation as Deputy Prosecutor General saying that he does not wish to be part of a body where “total lawlessness is tolerated”.  At a briefing on Monday, he stated that under the present leadership of the Prosecutor General’s Office he sees no possibility, of creating a European-style prosecutor’s office able and willing to effectively investigate corruption and other cases.

Vitaly Kasko, a fluent English speaker, has been in his post for the last 18 months and was in charge of international cooperation.  He has been vocal in criticizing the effective sabotage of efforts to reform the prosecutor’s office and recently said that “while the Prosecutor General spends so much time in the President’s Administration, we will not create either a European prosecutor’s office or a European state.”  Kasko stressed that he was not talking ‘off the record’, and that he had nothing to lose.

He acknowledged then, back in November, that his relations with the current Prosecutor General Viktor Shokin had been strained since their conflict over the so-called ‘diamond prosecutors’. That case, involving two high-ranking prosecutors, Volodymyr Shapakin and Shokin’s personal friend Oleksandr Korniyets,   was among the examples cited by US Ambassador to Ukraine Geoffrey Pyatt in an address expressing concern about Shokin’s actions, accusing him of undermining reforms, blocking important prosecutions, and defending corrupt prosecutors.

Kasko said that Shokin had demanded that he resign following their conflict but he had answered that Shokin had not appointed him and that he would not voluntarily resign.  This, unfortunately, has now changed.

Kasko was one of the people who revealed the sabotage of reform attempts which resulted with Shokin basically reshuffling old top level local prosecutors into other posts.  Virtually nobody from outside the system received a position despite a system for appointments that had been developed to ensure that the best candidates were chosen

During the press briefing and in his letter of resignation, Kasko provided a devastating assessment of the present situation.  The last straw for him had been yet another redistribution of powers within the Prosecutor General’s Office.  This, he said, had basically taken away their ability to investigate and monitor proceedings in cases such as that of the diamond prosecutors.

He asserts that under the current leadership of the Prosecutor General’s Office, corruption and a system of closing ranks are in force.  Any attempts to change this from within the prosecutor’s office are met with immediate and demonstrative persecution.

There is total lawlessness, he says, not observance of the law, and more and more key posts within the Prosecutor General’s Office are being taken by Shokin’s protégés – followers.

Despite the pretence of a formally formed body, the same system of political protégés; direct and total pressure on investigators and prosecutors; inaction and impunity remains intact.

With no possibility of truly fighting corruption and building a European prosecutor’s office, Kasko says he has no option but to resign.

His moves have already been condemned by another prosecutor from the PGO, Vladislav Kushchenko who claimed that they, and Kasko’s earlier actions, had been PR stunts.

Kasko’s resignation comes soon after that of the Minister of Economic Development and Trade, Aivaras Abromavicius.  The latter expressed his unwillingness to serve in a government that was more interested in personal gain than true reform.

That resignation was widely described as “a nail in the coffin for hopes of serious reform in Ukraine”.

Kasko’s departure is a major blow for any, rapidly dwindling, hopes of reform within the prosecutor’s office.  Since all his criticism has been voiced loudly by reformers in Ukraine and observers abroad, his resignation must also be a challenge to President Petro Poroshenko who has up till now refused to dismiss Shokin.