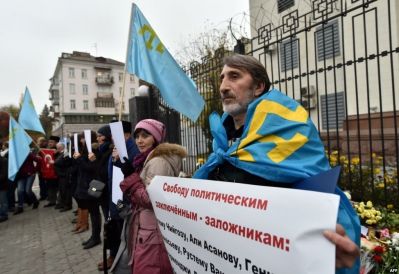 In a surprise move on Feb 15, the Supreme Court in Russian-occupied Crimea sent the case against Crimean Tatar leader Akhtem Chiygoz and 5 other Crimean Tatars back for ‘further investigation’. There was no mention of releasing Chiygoz and the two other men – Ali Asanov, the father of four small children, and Mustafa Degermendzhy who have now been in custody for periods of 8 to 13 months.  All three were on Monday declared political prisoners by the authoritative Memorial Human Rights Centre.

Chiygoz’s lawyer Nicolai Polozov believes that the delay is probably aimed at enabling the investigators to do a less inept job at falsifying evidence.  He says that everything was initially done in a sloppy fashion since they assumed they would get away with it.  The case has, however, gained publicity and the prosecutors and judges are presumably realizing that they need to take a bit more care.  As reported, the last court hearing was abruptly adjourned after just minutes, probably because of the presence in Simferopol of a Council of Europe fact-finding mission whose attendance at this travesty of a trial was doubtless not wanted.

No delay can remove the fundamental flaws in this case where the men are charged under Russian law over a demonstration which took place on Feb 26, 2014 in Ukrainian Crimea before Russia’s invasion and annexation of Crimea and therefore unequivocally under Ukrainian law.

There is also no evidence against any of the men and no clarity as to what any of them is actually charged with.

At the previous hearing on Jan 25, all three men held in detention asked for clarification about the fuzzy accusations.  Degermendzhy pointed out that he was charged with “committing a serious crime against public safety”, yet it was not understood whether this was Russian public safety or Ukraine’s.  He was supposed to have disobeyed the “legitimate demands of police officers”, with no indication given of what these demands had been and where it was recorded that he had not complied with them.  He is also alleged to have committed crimes against Russian nationals, yet nobody has explained which of the people involved in the demonstration on Feb 26, 2014, were Russian citizens.  (more examples here)

Applications from all defendants’ lawyers to have the prosecutions terminated for lack of jurisdiction and to release Chiygoz, Degermendzhy and Asanov from custody have been rejected, as have totally legitimate demands to clarify the charges.

Instead, on Monday, the court decided that the case needed to be sent back to ‘specify’ the number of people with victim status.  The file material gives one figure, the indictment another with a difference of several people.  It is also not specified what injuries they suffered.

Novaya Gazeta reported in late February 2015, a month after Chiygoz’s arrest, that the Russian Investigative Committee had been short of ‘victims’ and witnesses, and on February 2, 4 days after Chiygoz’s arrest and 11 months after the events, invited Simferopol residents to come forward “even in the absence of bodily injuries”.

The investigators are now being invited to be more ‘specific’ about this alleged evidence. Polozov points out that most of the people now deemed ‘victims’ do not have any documents confirming injuries. He believes that the number may now change with evidence simply fabricated.

This could simply be a show, for appearances, since the de facto prosecutor Natalya Poklonskaya has objected to the court’s decision and said that she will appeal against it. It could also, unfortunately, be done in the hope that there will be less attention to the politically motivated prosecution of the Deputy Head of the Mejlis or representative body of the Crimean Tatar people which Russia has set about banning.

There can be no chance of this with a case so cynically contemptuous of fundamental principles of law, where two of the defendants are quite likely in custody because they refused to provide the required testimony against the Mejlis leader.

In its statement on Feb 15, Memorial HRC points out that the Russian authorities have ignored the fact that the actions happened on Ukrainian territory before annexation and have called the events ‘mass riots’.

It points out that the Russian investigators came up with a formal excuse in that among the 79 (in another version 83!) victims, there were two people who were at the time Russian nationals.  Neither sought medical treatment at the time, and Memorial says that in their case, as in those of over half the ‘victims’, there are doubts over whether the alleged injuries were genuinely sustained.

The Russian prosecution is accusing the defendants of damaging a Ukrainian executive body and disobeying the demands of Ukrainian police officers.

The political motive, Memorial notes, is especially evident given that two sides were involved in the confrontation to an equal degree, yet only Crimean Tatars have faced charges.

Memorial also questions the claims that anybody ‘organized’ mass riots that day.  It demands the immediate release of Chiygoz, Asanov and Degermendzhy and the termination of the prosecution.

Up till now, readers have always been asked to write to the three men, with the Mejlis’ office in Kyiv given for letters.  In view of Russia’s major offensive and attempt to criminalize the Mejlis, this may not be the moment for letters.  It is, however, certainly the right time for international pressure to be brought to bear on Russia over its treatment both of the Mejlis, and of these political prisoners.