Detained for being Crimean Tatar 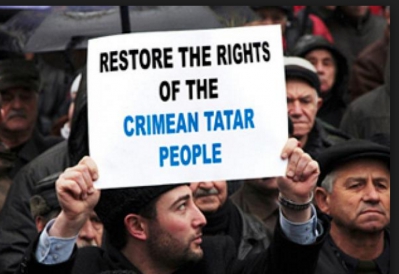 All young Crimean Tatar men trying to enter Crimea from mainland Ukraine at the Chonhar crossing on Feb 22 were stopped by Russian security service officers, with many taken away for questioning.  A Crimean Human Rights Group representative believes that the measures are yet another tactic to intimidate Crimean Tatars.

23 February is also another bitter anniversary – that of Stalin’s deportation in 1944 of Chechens and Ingush people from their homeland in the Northern Caucuses.   This did not, unfortunately, stop the current regime in Russia from making the day a public holiday in honour of ‘the defenders of the fatherland’.

The Crimean Human Rights Group suggests that the Russian authorities do not want deported peoples to demonstrate support and solidarity for one another.

On Feb 22, all Crimean Tatar men trying to enter Crimea at Chonhar were made to wait on the street, then taken into a prefab nearby for a ‘talk’.  Most were released after that, some taken away for further questioning.

One man told the human rights defenders that he had been separated from his wife and two children and made to wait on the street for around 40 minutes.  In his case, he was then told he could go without any questioning.

Vissarion Asseyev from the Crimean Human Rights Group told the website 15 Minutes that people on Tuesday were stopped and subjected to such ‘talks’ either coming to or leaving Crimea.

“This is a soft form of intimidation. The experience of light repressive measures against all those who are alien to the Russian regime, who could potentially be a threat to them.  If earlier there were official prosecutor’s warnings, now the security service has moved to verbal, but mass signs.  To indicate that they’re following you, and are ready for any of your actions”, Asseyev explained.

The harassment this time is certainly ‘lighter’ than that seen over the last 10 days when mass armed searches were carried out of Crimean Tatar homes in different parts of Crimea.   The men with guns and in balaclavas burst into homes where children were sleeping, totally terrifying them, and in some cases even breaking through doors or windows despite nobody having shown any resistance.   14 people were taken away for questioning, and four, including human rights activists Emil-Huseyn Kuku, are still in custody (see: Crimean Tatar Rights Activist & 3 others jailed on Russian-style ’terrorism’ charges)

Russia is also in the process of banning the Mejlis or representative assembly of the Crimean Tatar people.

Since invading and annexing Crimea almost two years ago, Russia has unleashed repression against all those who oppose their occupation.  Crimean Tatars have, however, from the beginning been particularly targeted and the situation, especially with the banning of the Mejlis, is critical.